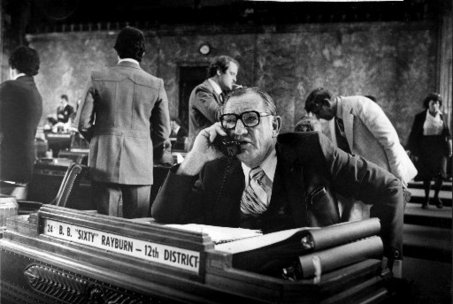 He served as a Democrat in both houses of the from 1948-1996. Rayburn's political roots were imbedded in the administrations of , but he was also friendly with later chief executives John J. McKeithen and . Even his loud and raspy voice was often compared to that of Earl Long. Rayburn survived generations of social and political change in his adopted home state, including the collapse of legal as well as the rise of women and Republicans to positions of authority. A , Rayburn entertained many with his lively reminiscences of the historic Long era. Rayburn was allied with and claimed to vote on a bill according to how the legislation in question would impact the "little man." Because of his longevity and power, Rayburn was known for years as the unofficial "Dean of the Louisiana Senate".

Rayburn (no relation to Speaker of the ) was born to Thomas Jefferson Rayburn and the former Grace Rawls, a ing couple in Sumrall in Lamar County in southwestern . He graduated from Sumrall High School. Therefter, the family moved to nearby Bogalusa, where Rayburn completed the Sullivan Vocational Technical School, or "trade school", for which he later helped to secure a new , which opened in 1971. The parents separated, and Rayburn came to Bogalusa with his mother, but the father arrived thereafter.

In 1948, while Long won his first full-term as governor, Rayburn was also elected to the Louisiana House of Representatives. He left the lower chamber in 1951, when he won a to fill a vacancy in the Louisiana State Senate created by the resignation of H. H. Richardson.

In time, Rayburn's District 12 (so numbered in 1972) included Washington Parish and portions of St. Helena, St. Tammany, and Tangipahoa parishes. There Rayburn remained until 1996, having been defeated in a tight election in 1995 by the Republican (born 1947, a and a retired in the . Short, who grew up in Shreveport, polled 21,222 votes (51 percent) to Rayburn's 20,676 (49 percent). [ [http://www400.sos.louisiana.gov:8090/cgibin/?rqstyp=elcms3&rqsdta=111895 Louisiana Secretary of State-Multi-Parish Elections Inquiry ] ] The Republicans targeted Rayburn and eleven other Democratic senators that year. In his last successful election in 1991, Rayburn (24,326 votes or 65 percent) easily defeated Republican Gerald "Jerry" Creel, Sr. (8,424 or 22 percent), and Independent Roy L. Crawford, (4,701 or 13 percent). [ [http://www400.sos.louisiana.gov:8090/cgibin/?rqstyp=elcmp&rqsdta=10199120012947 Louisiana Secretary of State-Election Results by Parish Inquiry ] ] In 1987, Rayburn had defeated Roy Crawford, then running as a Democrat, 31,903 (75 percent) to 10,377 (25 percent). [ [http://www400.sos.louisiana.gov:8090/cgibin/?rqstyp=elcms3&rqsdta=102487 Louisiana Secretary of State-Multi-Parish Elections Inquiry ] ] Short resigned the District 12 seat three years later in 1999 to accept a position with the Marines. Ironically, both senators who preceded and succeeded Rayburn served only three years of their term, resigned, and necessitated special elections. [http://www.legis.state.la.us/members/s1880-2004.pdf#search='c.c.%20taddy%20aycock'] Rayburn's district appeared to have turned solidly Republican in the election of , , when the sole Democratic candidate, Stanley Middleton, polled only 9 percent of the vote. Short was hence succeeded by Democrat-turned-Republican Jerry Thomas, who won the seat outright in the first round of balloting with 51 percent of the vote. [ [http://www400.sos.louisiana.gov:8090/cgibin/?rqstyp=elcms3&rqsdta=020699 Louisiana Secretary of State-Multi-Parish Elections Inquiry ] ] In the balloting for full term in October 1991, Thomas defeated Middleton, his only opponent, 76-24 percent.

In 1959, Rayburn acted as a lieutenant for Earl Long and helped to get the governor sprung from a mental institution where he had been confined by his wife, Blanche R. Long. Ironically, it was , later the longtime Democratic Party state chairman, who had signed the original commitment papers because he thought that he was acting in his friend Long's best interest. [http://www.time.com/time/printout/0,8816,825730,00.html Invictus?; http://www.insidenorthside.com/oct_nov03/art11.htm (Inside Northside Magazine's October/November 2003 Issue)] Rayburn, however, remained loyal to Long even as family members, concerned about the governor's drinking and public relationships with strippers, had Bankston, then the state director of hospitals, commit Long to Southeast Louisiana Hospital in Mandeville. With Rayburn's help, Long famously worked from his hospital bed to fire Bankston and then get released. Bankston (born 1907) still resides in Baton Rouge. On Rayburn's death, Bankston said that the veteran lawmaker had excelled in speechmaking but was also strong on Democratic issues involving and labor. The two had long since reconciled their differences over Long's hospitalization. Former Senate secretary , himself a native of Rayburn's Bogalusa, declared the former lawmaker the "last of the Red Hot Poppas," a term that Earl Long had applied to himself in the 1950s to refer to politicians traveling from one community to another with sound trucks for stump speaking, rather than reliance on slick . Baer noted that Rayburn could stop a bill by making a familiar argument that the proposed law would "hurt the poor people. . . . Even the author of a bill withdrew it or voted against his own bill after Sixty spoke against it."

Much of Rayburn's power came through his chairmanship of the Senate Finance Committee, where he stressed his desire to "protect the little man" and the poor from budget cuts in social services and the state's public hospitals known as "charity hospitals" and other social services. Rayburn said in a 2006 interview with the "Bogalusa Daily News", that he supported unpopular tax hikes in 1948 which helped to defeat the Long statewide slate of candidates in 1952, but those levies still finance the state's charity hospital system. Rayburn worked to secure a charity hospital for Bogalusa. He pushed for the of , known as "Big Charity". Rayburn himself once sought treatment at Big Charity when he contracted . Rayburn said the system is essential in Louisiana because many of its residents cannot afford . When Governor Charles E. "Buddy" Roemer, III, tried to close the charity hospital in Amite in , Rayburn blocked him by merely returning the appropriation to the spending bill. In effect, he showed that the chairman of the Finance Committee could trump the governor. As a House member, Rayburn began work in 1948 on the Washington-St. Tammany Charity Hospital in Bogalusa, which opened in January 1951, shortly before he entered the Senate. Mike Baer described Rayburn as "the last of the great populists in this state, He carried on the Long legacy until he left (the Senate). He was truly for "the poor man" and championed universal tax-funded health care.

In 1973, Rayburn served as chairman of the Committee on Revenue, Finance and Taxation at the state Constitutional Convention, which produced the of 1974. He served at the convention with future Governor Roemer and future Secretary of State and Insurance Commissioner as well as such lawmakers as state Representatives of and of . Rayburn advocated pay-as-you-go for state projects and insisted that local government fund its own projects. "We've run a Cadillac on a Ford budget for so long, the people are spoiled. Sooner or later, we’re going to run out of gas," Rayburn said to the recollection of Mike Baer. Rayburn served on a number of committees: Conservation, Education, and , Industrial Relations, Labor and Capital, Long-range Highway, Retirement, Interim Emergency Board, Bond Commission, and as Chairman of both the Senate Finance Committee and the Joint Legislative Committee on the Budget. Even with the election in 1979 of as the state's first Republican governor since Reconstruction, Rayburn maintained his reputation as a populist Democrat and an ally of organized labor. He strongly supported the scandal plagued Democratic Governor Edwards in the 1970s, the 1980s, and the early 1990s.

In 1973, Rayburn was made an honorary member of the , the Louisiana Veterinary Medical Association, in recognition of his years of service to the cause of "the health of man and his domesticated animals" in Louisiana, and for his work in the establishment of School of Veterinary Medicine. He was the first lay person to have received this honor. [http://www.webfh.com/fh/obituaries/obituary.cfm?o_id=170952&fh_id=10868; http://www.nola.com/news/t-p/frontpage/index.ssf?/base/news-5/1204785414304580.xml&coll=1&thispage=3] Rayburn, who owned racehorses, was president of the Louisiana Thoroughbred Breeders Association from 1966-1998. Association secretary-treasurer Tom Early declared the former senator responsible for every piece of legislation that benefited the horse-racing industry in Louisiana for decades: "He was our go-to guy in the legislature." One of Rayburn's legislative and constitutional convention colleagues, of Natchitoches, shared his interest in racehorses. Rayburn was also a member of the Louisiana 's Association.

Rayburn switched sides on segregation and worked with politicians in the 1970s. "I used to have some friends in the , I admit that. . . . But things have changed, and Rayburn rides with the waves," he said in a speech in 1977.

Rayburn's lengthy career ended amid allegations of scandal in the 1990s. He was accused of having taken s to protect interests. He was found not guilty of the allegations, but he had already lost his bid for a twelfth full Senate term. "I’ve sold a lot of things in my life, but I’ve never sold a vote, and I want them to prove it," Rayburn told his jury.Rayburn later returned to the state Capitol to lobby for legislation to protect and to maintain hog-dog competitions, which groups oppose. In such contests, dogs are used to hunt wild hogs. Rayburn noted that it was Earl Long who took him on his first hog hunt in 1948, a sport for which Rayburn developed a passion. Of Long, Rayburn said, "He was just my type of person. He was down to earth. He liked hogs, cattle and people."

On March 5, 2008, Rayburn died at St. Tammany Parish Hospital north of New Orleans. He had been hospitalized in February and was diagnosed with . [ [http://www.kalb.com/index.php/news/article/longtime-state-sen-bb-sixty-rayburn-dead-at-911/4359/ Longtime state Sen. B.B. “Sixty” Rayburn dead at 91 | KALB - News 5, Alexandria LA ] ] In his last years, Rayburn tinkered with s, cut , and hunted . Friends and family said that he maintained those practices until weeks before his death. Rayburn was a member of the and a . Rayburn was preceded in death by his parents, wife, son, a grandson (died at two days in 2000), one sister, Polly R. Rizan, and three brothers, John Daniel Rayburn, Thomas D. "Doc" Rayburn, and Robert B. "Bob" Rayburn. All three brothers died separately in 1966. [http://www.washington.lib.la.us/BOGALUSA%20DAILY%20NEWS%20OBITUARY%20INDEX.doc] Survivors included his daughters, Tommie Jean and Betty Ann; son-in-law, William Bedwell; daughter-in-law, Cidette Lewis Rayburn (born 1946), the widow of former Sheriff Rayburn, all of Bogalusa, and five grandchildren and ten great-grandchildren.

Services were held on at his home congregation, Palestine Church in Washington Parish. Interment was in the church cemetery, which is also adjacent to Rayburn’s farm.

Republican Governor ordered flags on state buildings flown at half staff on March 7 to honor Rayburn.

Louisiana State Senate President , a Democrat from Destrehan in , who began his legislative career during Rayburn's final term in the chamber, said that the Senate has "lost a dear friend and former colleague, (and) the people of Louisiana have lost a dedicated, compassionate public servant. Throughout his decades of service, Sixty prided himself as the voice of the little people, rightly reminding us at every opportunity that Louisiana belongs to everyone. . . . We will miss his wit, frankness and great oratorical style. We will not forget his love for Louisiana."

Former Governor Treen of Mandeville recalls Rayburn as a legislator who was always reliable: "I remember that he was very straightforward - dependable. You knew where he was, and where he was going." [ [http://www.edailynews.info/articles/2008/03/07/news/news03.txt Bogalusa Daily News Online ] ]

Former Republican Governor Murphy J. "Mike" Foster, Jr., who served as a Democrat with Rayburn in the state Senate, called his former colleague: "bigger than life, a great orator, and a powerful member of the legislature." Imprisoned former Governor Edwards released a statement: "His repeated re-election is proof of his service to his constituents. A giant has moved from the political scene, and he will be missed. I extend my sympathy to his family and friends and regret I will not be able to attend his services." [ [http://www.wafb.com/Global/story.asp?S=7968140 WAFB Channel 9, Baton Rouge, LA |Former State Senator B.B. "Sixty" Rayburn Dead at 91 ] ] In 1993, Rayburn was among the first dozen inductees into the Louisiana Political and Hall of Fame in Winnfield, along with former Governors Edwin Edwards, Huey Pierce Long, Jr., and Earl Long; former of , and former New Orleans Ernest "Dutch" Morial. [ [http://www.cityofwinnfield.com/museum.html Winnfield, La - Old L&A Depot, LA Political Museum ] ]

In 1978, Senate Concurrent Resolution 135 named the LSU Veterinary School as the Rayburn School of Veterinary Science.