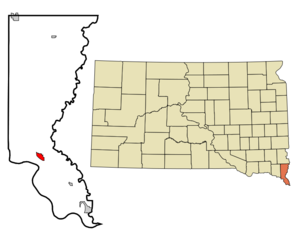 mapsize = 250px
map_caption = Location in Union County and the state of

There were 682 households out of which 33.6% had children under the age of 18 living with them, 56.2% were married couples living together, 7.5% had a female householder with no husband present, and 32.6% were non-families. 28.6% of all households were made up of individuals and 14.1% had someone living alone who was 65 years of age or older. The average household size was 2.43 and the average family size was 3.00.

The -based energy firm [http://www.hyperionresources.com/ Hyperion Resources Inc.] announced on June 13, 2007 that area north of Elk Point was a finalist for a new .

Opponents are concerned about air, water, and ; environmental degradation of nearby food crops such as , , and ; negative effects on the ethanol fuel market and competition with local ethanol producing farmers; displacement of thousands of local residents and negative population resettling; potential including explosions, leaks, and spills, reminiscent of the recent explosion at a similar-capacity Texas City Oil Refinery that caused the deaths of 15 workers and injured over 100; contamination and overuse of important water resources from the Missouri River; potential threats of ; and concerns of the sheer size of the facility, which will be over twice the area of Elk Point itself.

Supporters argue that the facility will bring a much-needed economic boost to the Union County area, and would create over 4,500 new construction jobs and employ 1,800 full-time workers once completed. Hyperion representatives have also promised that the corporation would "go the extra mile" to protect the environment.