The Mumbai Fire Brigade (Marathi: मुंबई अग्निशमन दल) is responsible for the provision of fire protection in the City of Greater Mumbai as well as responding to building collapses, drowning cases, gas leakage, oil spillage, road and rail accidents, bird and animal rescues, fallen trees and taking appropriate action during natural calamities. It is the largest fire brigade in India[1] with 33 Fire Stations and 2700 personnel.

The origins of the Fire Service in Bombay can be traced back to 1477 when the locals were allotted Rs. 4 per day for handling different carts and horse chariots which were used to extinguish fire. Mumbai Fire Brigade is considered one of the finest in the world . In 1855, the Bombay Fire brigade started as a part time function of the Police and a regular fire service with horse drawn fire engines came into being in Bombay under control of the Commissioner of Police. In 1864, a commission was appointed to report the organisation of fire service and a Police officer was sent to England to qualify himself as Captain of the New sterm Fire Brigade. Bombay Fire Brigade was placed jointly under the Govt. and the Municipality in 1865. On 1 April 1887.[2] , the fire protection subject had passed on the Municipality. In 1888 Bombay Municipal Corporation Act was enacted and protection of life and properties from fire become the obligatory duty of the Corporation. W.Nicholls of the London Fire Brigade was appointed Chief Officer of Bombay Fire Brigade in 1890 and the management passed into hands of a professional fire fighting officer.[3] In 1907, the first petrol driven motor fire engine was imported and commissioned in Bombay fire brigade. W.J.Scllu of Bombay Fire Brigade joined Bombay Salvage Corps, Which was formed on 1 May 1907 with 37 insurance Companies. one of the prime objective of the Corps apart from salvage operation, was to minimise chance of fire. Street Fire Alarm System was first introduced in 1913. The Brigade was motorised by replacing the horse drawn steam engine in 1920 and the Bombay fire brigade started ambulance service consisting of six ambulances donated by Bai Jerbal Wadia and Sir Mangaldas Mehta.[4]

After Independence, in 1948, M.G. Pradhan was appointed Chief Fire Officer, the first Indian to hold this distinction. Since then the Brigade has been completely manned and controlled by Indians.

The role and jurisdiction of the Brigade are set under the Maharashtra Fire Prevention and Life Safety Measures Act (2006).[5] Under the Act, the jurisdiction is set as the limits of Municipal Corporation of Greater Mumbai. Its role include:

The Mumbai Fire Brigade has its City Headquarters in Byculla and Suburban Headquarters in Marol headed by the Chief Fire Officer. For operational purposes, Mumbai is divided into four regions. These are further divided in Divisions which is then further sub-divided in Sub-Divisions. Each Sub-Division has required number of Fire Stations as per need.

When Mumbai Fire brigade started staff had 24 hour duty. They were provided quarters in premises of fire station. This virtually eliminated there personal life. Recently this rule was changed, now only officers have 24hr duty. Firemen have shift duty of eight hours. Few British rule are still prevalent like roll call is taken after every tea break, lunch break.

Work, which includes general duty, maintenance of fire stations, operational work, drills and such other works carried out Round the clock every day and time to time.

This includes Running up to 02 km and different sets of exercise.

Routine followed every day to check and impact various appliances and equipments as well as maintenance of Fire Station Group.

Other miscellaneous function as follows.

Fire brigade personals have three uniforms. Administrative uniform, Drill uniform and Fire fighting uniform. When attending a parade or any other ceremony, they are back in their blue uniforms with blue tunics and all their gallantry medals.[3] 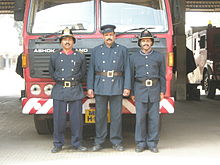 Mumbai Fire Brigade officials has dark blue tunic and pants. Blue keeps their body temperature constant (thus preventing them from catching fever) while fighting a blaze. The uniform includes a black waist-belt, a black helmet made from fibre reinforced plastic (in early days it was made from leather), and rubber shoes, which are fire-proof as well as chemical-proof. The uniform of the Mumbai Fire Brigade is distinctive. Fire Service Officers in other Indian States wear khakis. . Mumbai fire brigade personals use Merryweather type helmet. But now they are made of composite fibre 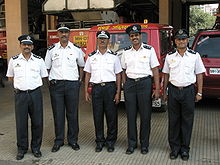 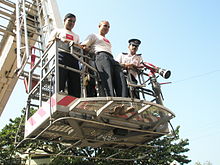 Drill uniform of a fireman

Firemen wear white T-shirts with MFB written on it and dark blue pants and leather shoes. Officers wear coat. Officers has to wear coat up to 8:45 am in morning, after that they change to Administrative uniform 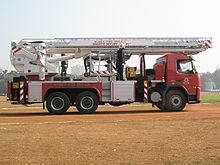 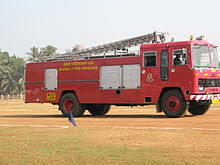 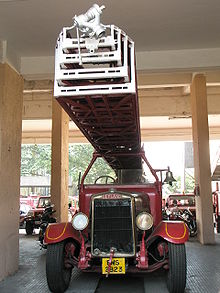 Fire Safety Week is held from 14 to 21 April every year, in honour of the 66 fire-fighters who lost their lives in the Bombay Explosion.[7]

On 26 November 2008, the Mumbai Fire Brigade faced its greatest challenge, as terrorists attacked multiple high-visibility targets within the south city centre. The attacks took place in buildings which were frequented by foreign tourists. Among the buildings involved were the Taj Mahal Hotel, Hotel Trident , Chhatrapati Shivaji Terminus , the Leopold Cafe and Bade Miyan Gali.

In a well-planned series of simultaneous attacks, the terrorists used automatic weapons, hand grenades and C4 explosive with the intention of murdering as many as possible, taking hostages and igniting fires within the structures. The largest blaze was determined to be the one at the Taj Mahal Hotel, whose upper floors were well-inflamed.

With no sprinkler systems or interior standpipes, the fire-suppression effort was limited to a master stream attack from aerial devices such as the Bronto Skylift. Firefighting efforts were hampered by gunfire aimed at firefighters, who bravely remained at their posts both atop the aerial platforms and at the ground level. Many dozens of rescues and removals took place using additional aerial devices.

American businessman, C. Richard Diffenderffer, was just one of hundreds of trapped victims. In news accounts, he referred to Mumbai's firefighters as "angels from Heaven." As fire crews finally reached Diffenderffer, he said they surrounded him in order to protect him from gunfire.

“There were some pretty scary moments while we were fighting fires at the Taj Hotel. On Thursday night, while we were in a cage trying to rescue guests trapped in the heritage section of the hotel, we saw a gun-toting terrorist,” A.V. Sawant, Chief Fire Officer, said.

“Luckily for us, he did not turn in our direction and we continued fighting the fire,” Mr. Sawant said. The fire brigade was called in to battle fires multiple times at the Taj and Oberoi hotels.

“They [the terrorists] kept setting the rooms on fire while fighting the commandos. We would wait for an assurance from the commandos before going in,” Mr. Sawant said.

However, the sound of firing did not make it easy for them, he said. “It was not easy to work in such conditions. There is a risk while fighting fires but in this case there was the added risk of bullets,” a fireman said.

In the wake of the late November 2008 events, it was revealed that Mumbai's firefighters have poor personal protective gear. One fireman best described the brigades' Personal protective equipment (PPE) as similar to London's circa 1950. Members currently wear wool tunics and compressed cork helmets. State-of-the-art firefighting gear has apparently been authorised by the Municipal Corporation of Greater Mumbai but, 13 months later, front-line firefighting teams had yet to see these lifesaving garments.

Majority of Fire Station has Ganesha temple. Because lord Ganesha is associated with coolness, and clearing obstacles. It is believed that due to cool nature of Ganesha it will shield Firefighter from heat of fire.