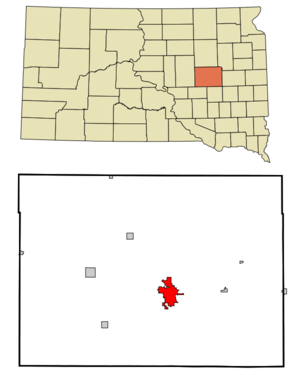 mapsize = 250px
map_caption = Location in Beadle County and the state of

Huron is a city in Beadle County, , . The population was 11,893 at the 2000 census. It is the of Beadle CountyGR|6. Huron was the home of now-defunct since 1897. Huron is also the home of the South Dakota State Fair. The "", also referred to as the Plainsman, is the newspaper.

Huron is home to the South Dakota State Fair, which is held 5 days before Labor Day

There were 5,263 households out of which 26.4% had children under the age of 18 living with them, 46.6% were married couples living together, 8.5% had a female householder with no husband present, and 42.1% were non-families. 37.3% of all households were made up of individuals and 16.8% had someone living alone who was 65 years of age or older. The average household size was 2.18 and the average family size was 2.86.

* (1957) "The Old Timers. A social history of the way of life of the home-steading pioneers in the Prairie States during the first few years of settlement, as shown by a typical community, the 'old-timers' of Beadle County in South Dakota". Huron, South Dakota: privately printed.