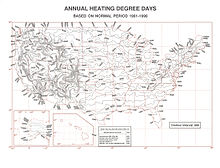 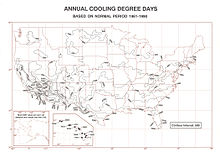 Heating degree day (HDD) is a measurement designed to reflect the demand for energy needed to heat a home or business. It is derived from measurements of outside air temperature. The heating requirements for a given structure at a specific location are considered to be directly proportional to the number of HDD at that location. A similar measurement, cooling degree day (CDD), reflects the amount of energy used to cool a home or business.

There are a number of ways in which HDD can be calculated: the more detailed a record of temperature data, the more accurate the HDD that can be calculated. HDD are often calculated using simple approximation methods that use daily temperature readings instead of more detailed temperature records such as half-hourly readings. One popular approximation method is to take the average temperature on any given day, and subtract it from the base temperature. If the value is less than or equal to zero, that day has zero HDD. But if the value is positive, that number represents the number of HDD on that day. This method works satisfactorily if the outside air temperature does not exceed the base temperature. In climates where this is likely to occur from time to time, there are refinements to the simple calculation which allow some 'credit' for the period of the day when the air is warm enough for heating to be unnecessary. This more accurate algorithm enables results to be computed in temperate climates (maritime as well as continental) throughout the year (not just during a defined heating season) and on a weekly as well as monthly basis.

HDD can be added over periods of time to provide a rough estimate of seasonal heating requirements. In the course of a heating season, for example, the number of HDD for New York City is 5,050 whereas that for Barrow, Alaska is 19,990. Thus, one can say that, for a given home of similar structure and insulation, around four times the energy would be required to heat the home in Barrow than in New York. Likewise, a similar home in Los Angeles, California, whose heating degree days for the heating season is 2020, would require around two fifths the energy required to heat the house in New York City.[1]

HDD provides a simple metric for quantifying the amount of heating that buildings in a particular location need over a certain period (e.g. a particular month or year). In conjunction with the average U-value for a building they provide a means of roughly estimating the amount of energy required to heat the building over that period.

One HDD means that the temperature conditions outside the building were equivalent to being below a defined threshold comfort temperature inside the building by one degree for one day. Thus heat has to be provided inside the building to maintain thermal comfort. Say we are given the number of heating degree days D in one year and we wish to calculate the energy required by a building. We know that heat needs to be provided at the rate at which it is being lost to the environment. This can be calculated as the sum of the heat losses per degree of each element of the buildings' thermal envelope (such as windows, walls, and roof) or as the average U-value of the building multiplied by the area of the thermal envelope of the building, or quoted directly for the whole building. This gives the buildings' specific heat loss rate Pspecific, generally given in Watts per Kelvin (W/K). Total energy in kWh is then given by:

Note that as total energy consumption is in kWh and heating degree days are [no. days×degrees] we must convert W/K into kWh per degree per day by dividing by 1000 (to convert W to kW), and multiplying by 24 hours in a day (1 kW = 1kWh per hour). Since one degree temperature difference in Celsius and Kelvin scale are the same, they get cancelled and no conversion is required.

Calculations using HDD have several problems. Heat requirements are not linear with temperature,[2] and heavily insulated buildings have a lower "balance point". The amount of heating and cooling required depends on several factors besides outdoor temperature: How well insulated a particular building is, the amount of solar radiation reaching the interior of a house, the number of electrical appliances running (e.g. computers raise their surrounding temperature) the amount of wind outside, and individuals' opinions about what constitutes a comfortable indoor temperature. Another important factor is the amount of relative humidity indoors; this is important in determining how comfortable an individual will be. Other variables such as wind speed, precipitation, cloud cover, heat index, and snow cover can also alter a building's thermal response.

Note that, because HDD are relative to a base temperature (as opposed to being relative to zero), it is incorrect to add or subtract 32 when converting degree days from Celsius to Fahrenheit or vice versa.