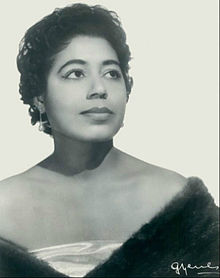 Mattiwilda Dobbs (b. July 11, 1925) is an African-American coloratura soprano and one of the first black singers to enjoy a major international career in opera. Possessing a small but buoyant voice, Dobbs was admired for her refined vocal technique and lively interpretations.

Mattiwilda Dobbs was born in Atlanta, Georgia, the daughter of John and Irene Dobbs, who were leaders in the African-American community of Atlanta. She began piano lessons at the age of seven, and sang in community and church choirs. She attended Spelman College where she began to study voice. She then studied with German soprano Lotte Lehmann in New York City and later won a John Hay Whitney Fellowship scholarship, which enabled her to pursue her studies in Europe, notably with Pierre Bernac.[1] After winning the International Music Competition in Geneva, Switzerland, in 1951, she made her professional operatic debut at the Holland Festival, as the Nightingale in Stravinsky's Le Rossignol, in 1952.

Dobbs quickly sang at the major festivals and opera houses throughout Europe. She made her debut at the Glyndebourne Festival, as Zerbinetta in Ariadne auf Naxos in 1953. Her La Scala debut the same year, as Elvira in L'italiana in Algeri, also marked the first time a black artist ever sang in that opera house. She made her debut at the Royal Opera House in London, as the Queen of Shemakha in Le Coq d'Or, in 1954. She also appeared at the Paris Opéra, the Vienna State Opera, and at the opera houses of Hamburg and Stockholm.

Her American debut was a recital with the Little Orchestra Society, in New York City, in 1954. She made her Metropolitan Opera debut, as Gilda in Rigoletto, on November 9, 1956. Although Marian Anderson had preceded her on that stage, she was the first black singer to be offered a long-term contract by the Met. In eight seasons, she also sang Zerbinetta, Zerlina in Don Giovanni, Olympia in Les contes d'Hoffmann, Lucia in Lucia di Lammermoor, and Oscar in Un ballo in maschera. She also appeared regularly at the San Francisco Opera in the late 1950s. Following the example set by other African-American performers, she refused to perform for segregated audiences, thus was not able to perform in her native city until 1962.

Dobbs retired from the stage in 1974, and began teaching at the University of Texas, where she was the first African-American on the faculty. She continued her teaching career as professor of voice at Howard University in Washington, D.C., before retiring to Arlington, Virginia, where she currently resides.

Mattiwilda Dobbs's coloratura soprano was praised for its freshness and agility, as well as tonal beauty. She can be heard in a few recordings, notably, The Abduction from the Seraglio, opposite Nicolai Gedda, and conducted by Yehudi Menuhin, Les pêcheurs de perles conducted by René Leibowitz, and a recital of opera arias and songs, recently released by Testament Records.

Mattiwilda Dobbs lived briefly in Spain, with her first husband, Luis Rodriguez, who died of a liver ailment in June 1954, fourteen months after their wedding. She then married Bengt Janzon, a Swedish newspaperman, in 1957. Janzon died in 1997.