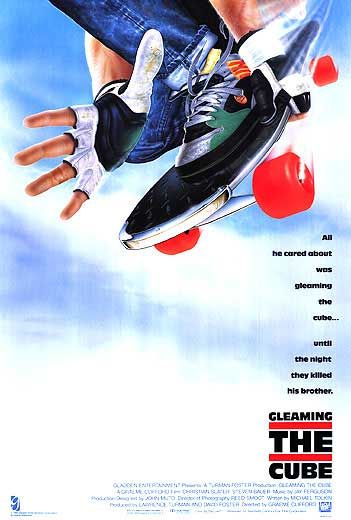 "Gleaming the Cube" (also known as "A Brother's Justice" and "Skate or Die") is an American movie released in 1989. It featured as Brian Kelly, a 16-year-old investigating the death of his adopted ese brother. Though set in contemporary Orange County, the movie includes story methods common to westerns and .

The film received only a moderate release in the United States from (in 469 theaters). Although the film had a relatively low box office turnout, "Gleaming the Cube" garnered a significant cult followingFact|date=April 2007 after its theatrical release, through basic cable replays on networks such as USA and the burgeoning VHS (and later DVD) market, as well as notoriety among skateboarders.

The title of the film reputedly refers to a gibberish statement skater Garry Davis made in a Thrasher magazine interview with Neil Blender. The phrase itself is meaningless.

* The Anaheim motel in the movie, the "Atomic Age Lodge," was in reality the Stovall's Cosmic Age Lodge on Katella Avenue, across the street from the then-Disneyland parking lot. It was one of a group of Stovall's hotels in the area with a space age theme (the others being Stovall's Apollo Inn and Stovall's Space Age Lodge. Today, the hotel is simply called Best Western Stovall's Inn, and, like the other Stovall's motels, no longer has any of the space age theming.

* Most of the School Scenes were filmed at Woodbridge High in Irvine,