A red worker tramples 'Capital', releasing the forces of industry for the workers' benefit.

The New Soviet man or New Soviet person (Russian: новый советский человек novy sovetsky chelovek), as postulated by the ideologists of the Communist Party of the Soviet Union, was an archetype of a person with certain qualities that were said to be emerging as dominant among all citizens of the Soviet Union, irrespective of the country's cultural, ethnic, and linguistic diversity, creating a single Soviet people, Soviet nation.[1] 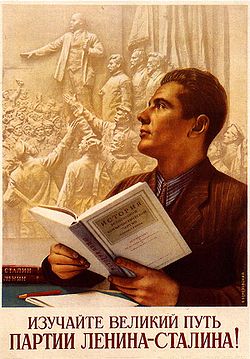 "Study the Great Path of the Party of Lenin and Stalin!": a young man recreates himself.

From the early times, ideologists of Communism claimed that Communism creates not only a new society, but also a new man. [2] For example, Leon Trotsky wrote in Literature and Revolution about the "Communist man", "man of the future":[3]

Author and philosopher Bernard Byhovsky, Ph.D. writes: "The new man is endowed, first of all, with a new ethical outlook." [5]

The three major changes postulated to be indispensable for the building of the communist society were economical and political changes, accompanied with the changes in the human personality.[citation needed]

The Soviet man was to be selfless, learned, healthy and enthusiastic in spreading the socialist Revolution. Adherence to Marxism-Leninism, and individual behavior consistent with that philosophy's prescriptions, were among the crucial traits expected of the New Soviet man. This required intellectualism and hard discipline.[6] He was not driven by crude impulses of nature but by conscious self-mastery -- a belief that required the rejection of both innate personality and the unconscious, which Soviet psychologists did therefore reject.[7] He treated public property with respect, as if it were his own.[8] He also has lost any nationalist sentiments, being Soviet rather than Russian, or Ukrainian, or any of the many other nationalities found in the USSR.[9] His work required exertion and austerity, to show the new man triumphing over his base instincts.[10] Alexey Stakhanov's record-breaking day in mining coal caused him to be set forth as the exemplar of the "new man" and the members of Stakhanovite movements tried to become Stakhanovites.[11]

Worker and Kolkhoz Woman commemorated in a stamp

This could also be a new woman; Pravda described the Soviet woman as someone who had and could never have existed before.[12] Female Stakhanovites were rarer than male, but a quarter of all trade-union women were designated as "norm-breaking."[13] For the Paris World Fair, Vera Mukhina depicted a momentual sculpture, Worker and Kolkhoz Woman, dressed in work clothing, pressing forward with his hammer and her sickle crossed.[13]

Aleksandr Zinovyev put forth the satiric argument that a new kind of person was indeed created by the Soviet system, but hold that this new man - which they call Homo Sovieticus - was in many ways the opposite of the ideal of the New Soviet man.[14]

Among the major traits of a new Soviet man was selfless collectivism. The selfless new man was willing to sacrifice not only his life but his self-respect and his sensitivity.[15]

This trait was glorified from the first Soviet days, as exemplified by lines from the poem Vladimir Ilyich Lenin by the Soviet poet Vladimir Mayakovsky:

is thinner than a squeak.

Who will hear it?

Fictional characters and presentations of contemporary celebrities embodying this model were prominent features of Soviet cultural life, especially at times when fostering the concept of the New Soviet man was given special priority by the government.

Pro-natalist[citation needed] policies encouraging women to have many children were justified by the selfishness inherent in limiting the next generation of "new men."[16]

Igor Kon has studied the psychology of "Soviet man" (or "Sovki" (scoops, in Russian), as the Soviet people used to semi-jokingly call themselves sometimes) extensively.

One of his most important insights is that the "negative selection", including various types of visibly oppressive treatment of those whose thinking doesn't fit the "party line" leads to development of "acquired helplessness syndrome"[17]

This phenomenon explains the traits characteristic of many ex-Soviet citizens: shyness, passivity, excessive trust - and need - of government, belief that one cannot really control his fate without a "guiding hand".

According to Kon, "The lack of individual responsibility is a product of decades of living under limited freedom. People get used to oppression. This has always happened with totalitarian regimes. I remember, I was greatly surprised to meet people with a similar mentality in East Germany, a country that has always been very different from Russia.This happened during the unification of the East and West Germany. I saw fright in the eyes of the East Germans, the same reaction as I see here in Russia – people do not know what to do. There is a psychological term for this – the acquired helplessness syndrome. The syndrome is usually manifested in social pessimism and lack of self-confidence. The acquired helplessness syndrome is the main feature of Soviet mentality and unfortunately it is prevalent among senior citizens."

In the 1920s and into the Stalinist era the concept of the “New Soviet Woman” served alongside that of the “New Soviet Man.” Her roles were vastly different than that of her male counterpart; she was burdened with a complex identity that changed with ideology shifts in the party doctrine toward more conservative notions of the role of the family and the mother in the Soviet system. The New Soviet Woman was a Superwoman who balanced competing responsibilities and took on the burden of multiple roles — Communist citizen, full-time worker, wife and mother. [18]

The New Soviet Person was generally characterized as male. In propaganda centered on the New Soviet Person, it was standard for men to be depicted as the primary actors, either battling opponents of the Marxist revolution or rebuilding the world. Women, on the other hand, were often portrayed as “backward,” passive beneficiaries of the revolution rather than its securers. This was so not least because the proletarian movement was organized and fought by the working class, which by and large consisted of men. Thus, propaganda often equated male domination with proletariat domination. Although the party leadership claimed the sexes enjoyed equal status under the law, not an insignificant accomplishment in itself, men remained the measure of worth. [19] This marginalization of women in the newly developing civil order made it difficult for women to find a place among the proletarian class for which the revolution was fought. Due to regulations during the NEP period on the extent to which women could work in dangerous conditions, how many hours they could work in a shift and the kinds of special care they received during maternity, many factory owners reluctantly hired women, despite the Commissariat of Labor’s requirements that women be given equal access to employment. [20]

There were gains made in combating illiteracy and promoting education for women during the 1920s. Soviet policy encouraged working-class women to attend school and develop vocational skills. There even existed opportunities for women to participate in politics, become party members and vie for elected and administrative positions. Access to the political sphere, however, was extremely limited.

Joseph Stalin’s policies on women were more conservative than that of his predecessor Lenin. Because he was concerned with a declining population rate, Stalin de-emphasized the Marxist feminist view of women in society, which necessitated the emancipation of the woman from the shackles of her doubly binding oppression, patriarchy and capitalism. In keeping with the party line, Stalin reasserted the importance of women in the workforce and female education, primarily literacy, although he began to emphasize the role of mother in a way that differed from more radical notions of the early 1920s. The “withering away” of the family was no longer a goal of economic and political progress. The new party line was that the family, like the state, was to grow stronger with the full realization of socialism. Massive propaganda campaigns linked the joys of motherhood with the benefits of Soviet power. [21] Soviet ideology began to argue that women’s public roles were compatible with her roles as wife and mother. In fact, that the two reinforced one another and were both necessary for real womanhood. [22]

The New Soviet Woman differed greatly from the conceptions of revolutionaries preceding the 1930s. Instead of being freed from domestic concerns, she was bound to them. Though she now filled the role of man’s peer in the workplace, she was also obligated to devote herself to being his helpmate in the home.[18] One of the primary roles of the New Soviet Woman was that of mother. This role became of great importance in the wake of population decline beginning in the 1920s. War and revolution had decimated the population. Legislation legalizing abortions and the increasing use of contraception—though still not that widespread—in the 1920s also contributed to the lower population numbers as women began to work more and give birth less. As a means to combat that trend, propaganda placed a new emphasis on the female’s role as the perpetuator of the Communist regime in their ability to produce the next class of healthy workers, a policy called pronatalism. Propaganda postured pronatalism, a means to encourage women to bear children, differently to urban working-class women than to rural peasant women. Propaganda designed for an urban audience linked healthy female sexuality with reproduction while medical information to peasant women positioned conception as the purpose of sexual intercourse. [23]

The new ideal Soviet woman appealed to many Soviet women. Many had found Marxist feminism difficult to swallow and preferred their traditional female roles. [24] Although these women drew satisfaction from their role as mothers, they appreciated the opportunity afforded them by the Communist ideology to dismantle the oppression that often went hand-in-hand with domestic life. With husbands that often beat, abused, and abandoned them and a society and government that looked down on them as intellectually and ideologically inferior prior to the Stalinist era, many women welcomed the ability to cast aside the stigma that came with their role as mother while retaining the status as an equal participant in society.

During the 1920s and into the Stalinist era, Soviet policy forced women to curtail their professional aspirations in order to fulfill their dual role as worker and housewife. Competing requirements of family life limited female occupational mobility. Women managed the role strain experienced during the Stalinist era either by either a restriction of professional aspirations or by limiting family size. Despite pitfalls, unprecedented opportunities were available to lower-class women during this time. Women now had a voice in debates and the Zhenotdel, the women’s section of the Central Committee from 1919-1930, made strides during its operation to increase political, social and economic agency of Soviet women. [25]