The Roman Catholic Diocese of Kielce (Latin: Kielcen(sis)) is an diocese located in the city of Kielce in the Ecclesiastical province of Kraków in Poland. 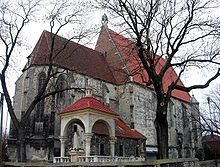