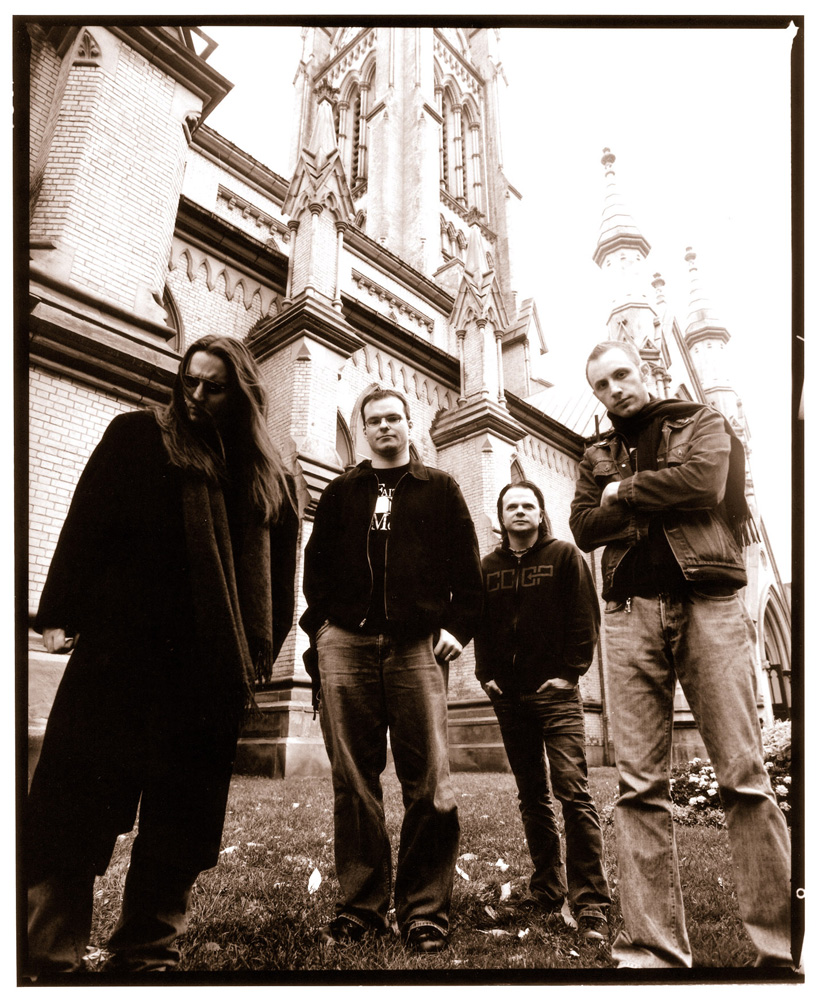 Agalloch is an American neofolk/black/ band formed in 1995 in Portland, . The band is led by vocalist and guitarist and so far have released four limited EPs, three full-length albums, two demos, one split album, and one compilation album. A live DVD and a fourth full-length album are planned for future release.

Agalloch began as the creation of and , named after the fragrant ous of the ("Aquilaria agallocha"). In early 1996, songs began to be produced by the duo and, during the summer, joined the band to further refine the material. These songs would later become the "" demo tape in the autumn of that year. This recording showed a large amount of influence, with an amount of material which would later appear on subsequent albums in one form or another. Shortly after the recording, was added to the line up as bassist.

In 1998, the three recorded a new promotional tape solely for labels. It caught the attention of , who offered them a record contract, resulting in the "" album. The album features less of a black metal influence than before, many totally reworked demo songs, more folk elements and neoclassical interludes. The album was met with much critical acclaim. After the recording was complete, Breyer departed from the band line up due to lack of interest in music.

"Of Stone, Wind and Pillor"

After a period of quiet, the band released an EP of unreleased material from 1998-2001 entitled "", revealing more of a neoclassical and experimental element. The EP also includes a cover of band Sol Invictus' "Kneel to the Cross" that would later be released on "", French label 's tribute compilation to Sol Invictus.

During the 2001 to early 2002 period, Agalloch recorded "", featuring more of a influence. The album sleeve art contains photographs of public statues and fountains found in downtown Portland. This album marked a change in media attention for Agalloch, landing them interviews with a few mainstream magazines.

Following the release of "The Mantle", Agalloch played their first show on , in Portland, Oregon. [http://www.metal-rules.com/concerts/agalloch.htm] This was followed by a few shows in March and a US west coast tour in May.

In 2003, "" was released and in 2004 "" were released. These EPs showcased an even more experimental side of Agalloch, featuring remixed and reworked versions of songs from "The Mantle" as well as a new post-rock-influenced title track on "Tomorrow Will Never Come". Agalloch also performed a series of shows on the US and Canada east coast in 2004.

A nature-themed split 10" picture disc EP with the Finnish band Nest was also released in 2004, showcasing a collaborative, effort by Agalloch. The Nest track was a more electronic, percussion-heavy effort with vocals and guitar contributed by Haughm and Anderson.

"Ashes Against the Grain"

"" was released on , by , featuring less focus on ""'s prominent s and instead more emphasis on s and metal elements, giving the album a different sound from that of their previous releases.

On , , Agalloch released "The White", the second half (and stylistic opposite) of their 2-part EP release for Vendlus Records. This was a collection of dark folk/ambient work from between the years 2004 and 2007. The sound had reverted away from the sound of their last release, "Ashes Against the Grain", and is more akin to the acoustic guitar sound of "The Mantle". The tracks "The Isle of Summer", "Sowilo Rune" and "Summerisle Reprise", are themed on , the latter two utilizing samples from the film. Also, the track "Birch White" borrows its lyrics from a song by titled "Birch Tree". The track "Sowilo Rune" was posted on their MySpace roughly two months before the album was released. As with "The Grey", the album was limited to 2,000 copies.

"The Demonstration Archive" and present

On August 4, 2008, Agalloch released a compilation album called "". It was a compilation of material recorded in between 1996 and 1998 that came from , the then-unreleased , and their 1998 promo album. Currently, Agalloch is working on a fourth full-length album, but due to the lack of a label for the band, it is likely that it will be 2009 before the record can be released.

Common themes in Agalloch's imagery and subject matter are natural beauty and allusions to ancestral .

One of the non-traditional instruments Agalloch has been known to use is the skull of a deer. In the song "The Lodge" strikes the deer skull in order to create an unusual clicking sound. [cite web |author=Martinelli, Roberto |title=Interview with Jason Walton of Agalloch |url=http://www.maelstrom.nu/ezine/interview_iss14_18.php |publisher=Maelstrom.nu |accessmonthday=March 25 |accessyear=2008] .

In a 1999 interview done by Dan Tobin with Jason William Walton and John Haughm [http://www.earache.com/WickedWorld/interview/re_routing_files/allagoch.html] , the band members have cited other influences including , , , Swans, and .