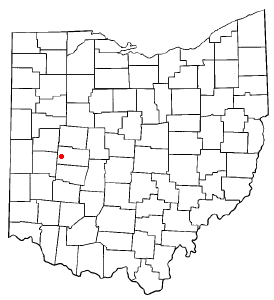 The area where St. Paris now stands was originally inhabited by Native Americans. The first European settlers arrived in and the village was founded in by David Huffman, who originally named it New Paris. Upon learning that another town in Ohio already had that name, he changed the name to St. Paris. There is apparently an actual [http://saints.catholic.org/saints/saint.php?saint_id=5226 Saint Paris] (also known as Amasius, Bishop of ; d. ) among the saints recognized by the Catholic Church, though it is unclear whether Huffman intended the village's new name as a tribute to this saint.

"The flourishing and enterprising town bearing the above name is prettily situated, in a basin as it were, on a very high elevation of ground. It was named after the metropolis of France by David Huffman, who laid it out in 1831. On learning of a "New, Paris” in Ohio, he prefixed to it the Saint, to avoid any difficulty that might occur in mail matter. The lots were surveyed by the old pioneer surveyor, John Arrowsmith. The first house in the town was built by David Huffman; a hewed-log house, standing on the northwest corner of Springfield and Main streets. It was a very neat piece of work, carefully made by Huffman himself, and was the pride of the neighborhood. The first frame house of any note was built by John Falkner, soon after the town had been laid out. It then became the American Hotel, on Main Street. Huffman was the first merchant, inn-keeper and Postmaster. William Rosebro was one of the early tavern-keepers, occupying the house known as the old La Rue Tavern. Jacob Protsman was the first blacksmith, and occupied a log shop on Main Street. Dan Putman was an early grocer, located on West Main Street. The town grew quite rapidly, and in the year 1845 it numbered nearly twenty houses. In 1846 or 1847, the Columbus & Piqua Railroad was built through St. Paris, which gave it great advantages over neighboring villages, and it began steadily to increase, until it is now known as one of the live towns of Champaign County, and bids fair to rival others, its seniors in years. Through the efforts of its many enterprising citizens it has become a town of fair population, studded with numerous churches, fine residences, business houses, banks and a good school. It also supported several manufacturing interests, among them carriage manufacturing, a tile factory, steam saw-mill, grist-mill, etc. It has its three grain ware rooms, where 300,000 bushels of grain are annually shipped to the markets of the country. The American House and "U. S." were the hotels of the town. The proprietor of the former is Joe A. Hellings. We were unable to get at the exact date of its incorporation as a town, but the year 1858 will not miss it far. Its first Mayor was John F. Riker, by whom a Bed and Breakfast, The Riker house on Walnut Street, is now named."

There were 781 households out of which 38.0% had children under the age of 18 living with them, 55.8% were married couples living together, 11.4% had a female householder with no husband present, and 28.8% were non-families. 25.9% of all households were made up of individuals and 11.4% had someone living alone who was 65 years of age or older. The average household size was 2.56 and the average family size was 3.07.

Graham High School, a member of the Central Buckeye Conference, is located in St. Paris. There is also Graham Middle School, and the Graham Elementary School which was newly built in 2007.There is also the Graham Digital Academy in the board of education as well.