Old Sydney Town was a small open air museum which operated from 1975 until 2003 in the town of Somersby, near Gosford New South Wales, Australia. The park was intended to be a living tribute to Australia's colonial past.

The park was opened in 1975 by Gough Whitlam.[1] It was developed by architect Frank Fox with the help of the Federal Government and the Bank of NSW. The Wran state government took over the federal investment shortly after the Fraser government took power at the end of 1975.

During its lifetime, the park had 6 million visitors .[2]

When the park was closed in 2003, the operators blamed the closure partly on what they call the "instant gratification" generation that demands computer games and thrill-rides, rather than a leisurely stroll through history.[3]

Since the park closed to the public it has been let for movie shoots. 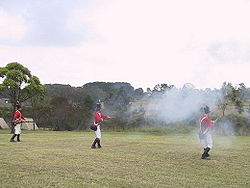 The Red Coats in action

The Town was set out according to James Meehan's map of Sydney in 1803 and consisted of over 30 authentically reconstructed buildings.[4] This reconstruction of 1803's Sydney closed exactly 200 years later.