Timex Sinclair was a joint venture between the British company Sinclair Research and Timex Corporation in an effort to gain an entry into the rapidly-growing early-1980s home computer market in the United States. The choice of partnership was natural as Timex was already the main contractor for manufacture of Sinclair's ZX81 and ZX Spectrum computers at its Scottish plant in Dundee.

It was Timex of Portugal, though, that took on the R&D and the local manufacturing of the models to be exported to the U.S. Although both Timex of Scotland and Timex of Portugal were full subsidiaries of Timex, internal rivalry, whether unintended or purported, meant there were no contacts nor experiences shared between the two plants.[citation needed] Timex of Portugal also sold the Timex Sinclair models in Portugal and Poland under the Timex Computer brand.

Timex Sinclair released four computers, all of them based (to some extent) on Sinclair Research's existing machines. In chronological order:

The Timex Sinclair 2068
Although a similar shape to the +3, the box on the right is not a floppy disk drive but a front-loading cartridge port.

In July 1982, Timex Sinclair introduced the first computer touted to cost under $100 marketed in the U.S. (TS 1000). In spite of the flaws in the early versions, half million units were sold in the first 6 months alone.

Overall, the machines were nowhere near as successful as their UK progenitors; in contrast with the ZX Spectrum, which was the best-selling computer in Britain at the time, the TS2068 was a relative failure.

Timex Corporation withdrew from the U.S. home computer market in February 1984 but Timex of Portugal continued to manufacture, sell and develop hardware in Portugal and Poland for another ten years.

The next computer, the TC3256, was the third generation of Timex Computer Technology, but it vanished when Timex of Portugal shut down its production line.

Timex of Portugal also produced a Z80-based CP/M-compatible computer, the Timex FDD or FDD 3000. Most people only know it as a floppy disk drive controller but in fact, it is a computer without graphics circuitry. The FDD or FDD 3000 could be used in three different ways: 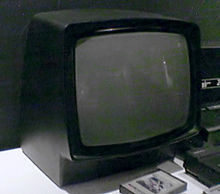 Neptun 156 monitor. It came in matching black or grey colours.

TMX Portugal also sold the TS2040 and later renamed it to Timex Printer 2040.

To export the Timex Computer to Poland, Timex of Portugal had to be paid in goods. It chose to import the Neptun 156 12" green monochrome monitor, manufactured in Poland by Unimor company. Based on the Vela TV receiver, it proved very popular in Portugal and was frequently sold in bundles with the TC computers.