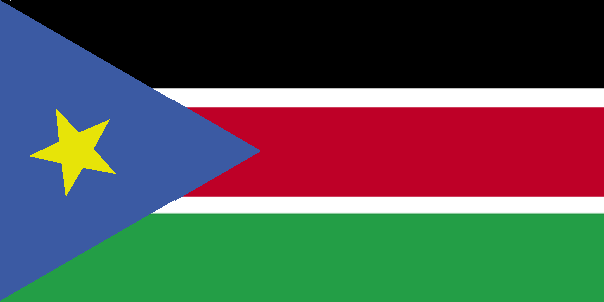 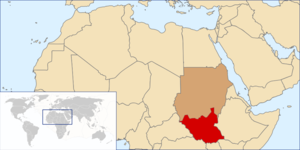 Southern Sudan is a region of , comprising ten of that country's states. The Sudanese government agreed to give to the region in the Comprehensive Peace Agreement (CPA) [ [http://www.reliefweb.int/rw/RWB.NSF/db900SID/EVIU-6AZBDB?OpenDocument "The Comprehensive Peace Agreement between The Government of The Republic of The Sudan and The Sudan People's Liberation Movement/Sudan People's Liberation Army"] (from reliefweb.int)] signed on , in , , with the SPLA/M, tentatively bringing an end to the Second Sudanese Civil War 1983-2005. A referendum is scheduled for 2011 on whether to remain in the greater Sudan or to become an independent nation. Southern Sudan borders to the east, , , and the to the south, and the to the west. To the north lies the predominantly and Muslim region directly under the control of the central government, with its capital at . It includes the vast region of the formed by the , here called the .

Southern Sudan, also known as New Sudan, has nearly all of its administrative offices in Juba, the capital, and the city with the largest population.

Southern Sudanese predominantly practice traditional indigenous beliefs and [ [http://www.usip.org/religionpeace/rehr/sudanconf/almquist.html USIP.org] ] , particularly the and the Roman Catholic Church. The South also contains many more ethnic groups and languages than are found in the North. Without a proper census, and given polygamy and large families, estimates of the relative proportions of the hundred ethnic groups in the South is difficult. However, it is widely agreed that the largest ethnic group in the South is , followed by . Other peoples include the Bari and .

The oil and other mineral wealth of the South lies on what is known as , including Unity and Upper Nile states, which has a high concentration of Nuers.

After the death of , the (SPLA) and the (SSDF), overcame their mutual antagonism and merged in January 2006 under the [ [http://www.sudantribune.com/spip.php?article13483 Sudantibune] ] . The SSDF was founded by the current vice president of the South, Dr. , who defected back to the SPLA/M in 2002, leaving General as the chief of staff (head) of the SSDF. Under the Juba Declaration, General Matip became the deputy commander-in-chief of the SPLA, and his SSDF forces were integrated into the SPLA, swelling its ranks from 30,000 to an estimated 130,000 troops.

Southern Sudan has many tribal groups and many used languages than that used in the north [ [http://www.southern-sudan.com/about-sudan.htm Southern sudan .com] ] . The language of education and government business is English ,which was adopted as the official language for Southern Sudan in 1928 [ [http://maxpages.com/machar Maxpages] ] and was acknowledged as the principal language in southern Sudan in the late 1980s [ [http://countrystudies.us/sudan/36.htm countrystudies.us] ] , although the distinctive "arabi juba" , developed in the 19th century, among descendants of Sudanese soldiers, derived mostly from the Bari tribal native tongue is a widely specify|date=June 2008 used in Southern Sudan. However, English is used as lingua franca in areas where Juba pidgin Arabic is not used.

"Abyei, Nuba Mountains, and Blue Nile are to hold a referendum in 2011 on whether to join South Sudan."

The relationship between autonomous Southern Sudan and the neighbouring areas of , /Southern Kurdufan, and has yet to be definitively determined.

Southern Sudan consists of the ten states which formerly composed the provinces of (, , and ), Bahr el Ghazal (, , Lakes, and Warrap), and Upper Nile (, Unity, and Upper Nile).

Pending elections, seats in both the Southern Sudan Assembly and the Government of the Southern Sudan are to be divided in a fixed proportion between the SPLM (70%), the NCP (the former NIF) (15%), and "other Southern political forces" (15%). From the time of the Naivasha Agreement until his death on , longtime rebel leader John Garang was the President of Southern Sudan. He was succeeded by who was sworn in as first vice president of Sudan on .

A referendum on the independence of the Southern Sudan is scheduled for January 2011 [ [http://www.sudantribune.com/spip.php?article22813 Road to 2011 referendum is full of obstacles – South Sudan's Kiir] Sudan Tribune, 12 July 2007] .

By the time of the of 2005, humanitarian needs in Southern Sudan were significant. The amount of destruction left by over 20 years of war was massive.

However, humanitarian organizations under the leadership of the (OCHA) managed to ensure sufficient funding to bring relief to the local populations. Along with recovery and development aid, humanitarian projects were included in the 2007 Work Plan of the and partners. [cite web|url=http://www.unsudanig.org/workplan/2007/docs/darfur/WP07_D_regional_workplan_section.pdf |title=2007 Work Plan of the United Nations and partners]

In 2007, OCHA (under the leadership of ) started to phase out of Southern Sudan, as humanitarian needs gradually diminished, slowly but markedly turning over control to the recovery and development activities of NGOs and community-based organisations. [cite web|url=http://www.irinnews.org/Report.aspx?ReportId=71676 |title=Comments to by UN Spokesperson Maurizio Giuliano]

It is estimated who?|date=June 2008 that the Southern region has a population of around 8 million, but given the lack of a census in several decades, this estimate may be severely compromised. The economy is predominantly rural and subsistence farmingfact|date=June 2008. This region has been negatively affected by the First and s for all but 10 years since in 1956, resulting in serious neglect, lack of infrastructure development, and major destruction and displacement. More than 2 million people have died, and more than 4 million are internally displaced or have become s as a result of the civil war and war-related impacts fact|date=June 2008 . The region has been struck by occasional . A 1998 famine killed hundreds of thousands, and a food emergency was declared in mid-2005 when?.

In recent years, a significant amount of foreign-based oil drilling has begun in Southern Sudan, raising the land's geopolitical profile. Khartoum has broken much of the Sudan into blocks with about 85% of the oil coming from the South. Blocks 1, 2, and 4 are controlled by the largest overseas consortium, the (GNPOC). GNPOC is composed of the following players: , the , with a 40% stake, (Malaysia), with 30%, , with 25%, and of the central Sudan government with 5%fact|date=June 2008.

Another major block in the South, called Block B by Khartoum, is claimed by several players. was awarded the concession for the 90,000 square kilometre block in the 1980s but has since done limited work invoking "force majeure". Various elements of the SPLM handed out the block or parts thereof to other parties. Several of these pre-Naivasha deals were revoked when the SPLM came to power. One company, , claims that the Government of Southern Sudan has since accepted its pre-CPA contracts fact|date=June 2008. These contracts are backed by General Paulino Matip, the deputy commander-in-chief of the SPLA, who originally signed agreements in March 2004 as head of the SSDF and has publicly supported Jarch Management Group fact|date=June 2008.

The wealth-sharing section of the CPA states that all agreements signed prior to the CPA would hold; they would not be subject to review by the National Petroleum Commission (NPC), a commission set up by the CPA and composed of both Northerners and Southerners and co-chaired by both President al-Bashir of the North and President Kiir of the South. However, the CPA does not specify who could sign those pre-CPA agreements. Both Khartoum and the SPLM claim the ability to sign agreements prior under the right of "self-determination" awarded to Southerners fact|date=June 2008. A major issue being discussed amongst those who?|date=June 2008 that hold concessions from Khartoum is, what happens if the South secedes.