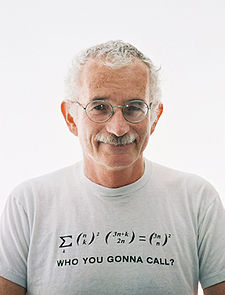 Photograph of Doron Zeilberger wearing a T-shirt with a Hypergeometric identity at its forefront.

Doron Zeilberger (דורון ציילברגר, born July 2, 1950 in Israel) is an Israeli mathematician, known for his work in combinatorics.

He is a Board of Governors Professor of Mathematics at Rutgers University.[1] He received his doctorate from the Weizmann Institute of Science in 1976, under the direction of Harry Dym.

Zeilberger has made numerous important contributions to combinatorics, hypergeometric identities, and q-series. Zeilberger gave the first proof of the alternating sign matrix conjecture, noteworthy not only for its mathematical content, but also for the fact that Zeilberger recruited nearly a hundred volunteer checkers to "pre-referee" the paper. Together with Herbert Wilf, Zeilberger was awarded the American Mathematical Society's Leroy P. Steele Prize for Seminal Contributions to Research in 1998 for their development of WZ theory, which has revolutionized the field of hypergeometric summation. In 2004, Zeilberger was awarded the Euler Medal; the citation refers to him as "a champion of using computers and algorithms to do mathematics quickly and efficiently." In 2011, together with Manuel Kauers and Christoph Koutschan, Zeilberger proved the George Andrews and David P. Robbins [2].

Zeilberger considers himself an ultrafinitist.[3] He is also known for crediting his computer "Shalosh B. Ekhad" as a co-author ("Shalosh" and "Ekhad" mean "Three" and "One" in Hebrew respectively, referring to the AT&T 3B1 model), and for his provocative opinions, some of which are: