The Republic of China Air Force (Chinese: 中華民國空軍; pinyin: Zhōnghuá Mínguó Kōngjūn) is the aviation branch of the Republic of China Armed Forces. The ROCAF's primary mission is the defense of the airspace over and around Taiwan. Priorities of the ROCAF include the development of long range reconnaissance and surveillance networks, integrating C4ISTAR systems to increase battle effectiveness, procuring counterstrike weapons, next generation fighters, and hardening airfields and other facilities to survive a surprise attack.

In May 2005, the Ministry of National Defense indicated its intention to transfer command of all defensive missile systems to the ROCAF, while future offensive missiles would be placed under a newly formed missile command. As of 2006, all medium and long range SAM units were transferred from ROC Army's Missile Command to ROCAF, while ROCAF's airbase security units were transferred to ROC Army Military Police. But it's revealed in January 2011, 5 years long problems of integrating those long range ex-ROC Army SAM units into ROCAF has forced ROCAF high command decided to return those units back to ROC Army's Missile Command.

In July 2010, former United States Air Force deputy under secretary for international affairs, Bruce Lemkin said that Taiwan's ability to defend its airspace had degraded due to its aging fighters and that the sale of new fighter aircraft to Taiwan was an urgent priority.[1] On 21 September 2011, it was announced that the US had agreed to a US$ 5 billion upgrade to the F16s.[2]

Like most of the other branches of the ROC armed forces, much of the ROCAF's structure and organization is patterned after the United States Air Force. Like the USAF, the ROCAF used to have a wing → group → squadron structure. After November 2004, tactical fighter wing switch to wing → Tactical Fighter Group, with some fighter squadron stood down, with each tactical fighter group, still pretty much the same size as squadron, now commanded by a full Colonel.

Air Force GHQ is subordinate to the General Staff (military), the Minister of Defense (civilian), and the ROC President.

Main articles: List of aircraft used in China before 1937 and Development of Chinese Nationalist air force (1937–1945) 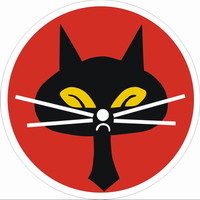 Formally established in 1920 as the Aviation Ministry, the ROCAF was active during the tenure of the ROC on Mainland China. In this period, various airplanes were purchased and deployed by warlords in their struggle for power until nominal Chinese reunification in 1928. In February 1932, US Reserve Lt. Robert McCawley Short, who was transporting armed Chinese aircraft, shot down an IJN aircraft on February 19, 1932 and downed another on February 22 before he was killed (he was posthumously raised to the rank of Colonel in the Chinese Air Service).

During the Second Sino-Japanese War (1937–1945), the ROCAF participated in attacks on Japanese warships on the eastern front and along the Yangtze river including support for the Battle of Shanghai in 1937. The Chinese frontline fighter aircraft initially were mainly the Curtiss Hawk II and III and the Boeing P-26 model 281, and engaged Japanese fighters in many major air battles beginning on August 14, 1937, when Imperial Japanese Navy warplanes raided Chienchiao airbase; "814" has thus become known as "Air Force Day". Chinese Boeing P-26/281 fighters engaged Japanese Mitsubishi A5M fighters in what is among the world's first aerial dogfighting between all-metal monoplane fighter aircraft. A unique mission in April 1938 saw two Chinese B-10 bombers fly a mission over Japan, but dropping only propaganda leaflets over the Japanese cities of Nagasaki and Saga. It was a war of attrition for the Chinese pilots, as many of their most experienced ace fighter pilots, such as Lieutenant Liu Tsui-Kang and Colonel Kao Chih-Hang were lost early in the war.

In the latter-half of the Sino-Japanese War, part of World War II, the ROCAF was augmented by a volunteer group of American pilots (the Flying Tigers) in 1941.[5] Throughout the war, the ROCAF was involved in attacks on Japanese air and ground forces in the Chinese theatre.

ROCAF General HQ was established in June 1946. From 1946 to 1948, during the Chinese Civil War, the ROCAF participated in combat against the People's Liberation Army engaging in air to air combat on at least eleven occasions in the areas surrounding the Taiwan Strait. The ROCAF reportedly enjoyed a 31:1 kill ratio against the PLA. GHQ was evacuated to Taiwan along with the rest of the ROC Government in April 1949 following the Communist victory in the Chinese Civil War. The ROCAF assisted in halting the PLA advance at the Battle of Kuningtou on Kinmen the same year.

The ROCAF regularly patrolled the Taiwan Straits and fought many engagements with its Communist counterpart (the PLAAF). The ROCAF received second hand equipment from the US at that time, such as the F-86 Sabrejets, F-100 and F-104. 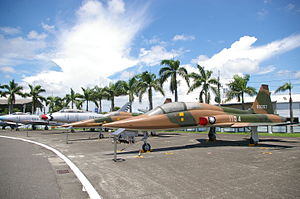 During the Cold War, the ROCAF was involved in combat air patrols over the Taiwan Strait and engaged the PLAAF and PLAN-AF on several occasions. The ROCAF was also the testbed of American technology at this time. The first successful kill scored by an air-to-air missile was accomplished by an ROCAF F-86 Sabrejet with then experimental AIM-9 Sidewinder. ROCAF pilots also flew U-2 recon overflights of the PRC during this time with assistance from the USAF. Known as the Black Cat Squadron they flew total of 220 mission, with 102 missions over mainland China, losing 5 planes. All five were shot down by SA-2 surface-to-air missiles, the same type of surface-to-air missile that shot down Gary Powers over the USSR in 1960. The 34th "Black Bat Squadron" flew low level mission into China as part of its mapping PRC growing air defense networks, conducting ESM and ECM missions, inserting agents behind enemy line, and air drop resupply missions.

The ROCAF's inventory includes over 400 combat aircraft, the mainstay being the F-16 and F-CK-1 Ching-kuo, with the Mirage 2000s being its most formidable air-defence fighter. The older F-5s are gradually being phased out.

The development of the IDF (Indigenous Defense Fighter) was started in 1984 due to the United States refusing to sell the F-16 to the ROCAF. The IDF's maiden flight was made in 1989, and the plane entered service in 1994. The ROCAF was subsequently able to obtain the F-16 from the US and Mirage 2000-5 from France.

The ROCAF's main supplier of equipment is the United States, which also assists in the training of some ROCAF pilots at Luke AFB in Arizona.

In January 2006, the Air Force announced it wanted to buy planes with VSTOL capability, especially the US F-35. It also expressed an interest in upgrading its current F-16s and Mirages, possibly even purchasing second-hand F-15s. However, the US rejected the sale of F-35s or F-15s. There were no media reports as to how France responded. A Pentagon report has said that given that the PRC would probably seek to destroy Taiwan's airfields in the first stages of any attack, the F-35B STOVL fighter would be vital for Taiwan's defense.[6]

In mid 2006, the Air Force announced plans to buy 66 F-16 C/D Block 52 aircraft from the US for $3.1 billion USD.[7] On October 2, 2006, the US said that it would not allow the purchase of the 66 F-16s at that time. According to sources cited by National Defense Minister Lee Jye, the US stance was that until a long-stalled arms purchase package consisting of six Patriot Missile Batteries, 12 P-3C Orion anti-submarine aircraft and 8 conventional submarines cleared the legislature, it did not see the ROC as having a consistent military procurement plan and temporarily blocked the sale.[8]

The Taiwanese Legislative Yuan approved the 2007 defence budget, which included funds for part of the arms purchases on June 16, 2007.

On February 28, 2007, the US Defense Department approved an order made by the ROC for 218 AIM-120C-7 AMRAAM missiles, as well as 235 AGM-65G2 Maverick missiles, associated launchers and other equipment. The total value of this order was revealed to be $421 million USD.[9]

In June 2007, the Legislative Yuan approved the upgrade of the existing PAC-2 batteries to PAC-3 standard. In November, the Pentagon notified the US Congress of the Patriot upgrade order.[10]

On August 10, 2007, a shipment of Harpoon anti-ship missiles was also authorised by the US Defense Department, valued at an estimated $125 million. Included in the package were 60 AGM-84L Block II missiles and 50 upgrade kits to bring the ROCAF's existing Harpoons up to Block II, Mark L standard.[11]

On October 3, 2008, arms notifications were sent to Congress concerning, amongst other things, the sale of 330 PAC III missiles, 4 missile batteries, radar sets, ground stations and other equipment valued up to $3.1 billion USD, the upgrade of 4 E-2T aircraft to the Hawkeye 2000 standard and $334 million USD worth of spare parts for the ROCAF's F-16s, IDFs, F-5E/Fs and C-130s.[12]

On January 28, 2010, ROCAF received first batch of new TC-2(V) BVR missiles ordered from CSIST. Believed to have new radar seeker and improved performance from the original missile entered service over 10 years ago.[13]

On August 15, 2011, it was reported that the US had once again deferred Taiwan's request to purchase 66 new F-16C/Ds but had offered a retrofit package for Taiwan's older F-16A/B's.[17] A $5.3 billion upgrade package for ROCAF's existing F-16A/B fighters was announced on 21 September 2011.[18] The upgrade budget was to be spread over 12 years, though the Ministry of Defense indicated that it would try to reduce the period.[19]

On August 31, 2010, it was announced for next year's defense budget, ROCAF's "Medium Transport aircraft" plan to replace 12 B-1900 VIP/transport training aircraft, believed to be 6-8+ Lockheed C-27J, has been put on hold and might be axed, due to lack of budget. But will allocates 20+ million US dollars over next 4 years for quick runway repair.[20] Other items mentioned including increases runways from 3 to 6 at Eastern Taiwan's 3 airbases, moving 2 I-HAWK batteries to Eastern Taiwan to protect those airbases, which will double to 4 batteries, and others.[21]