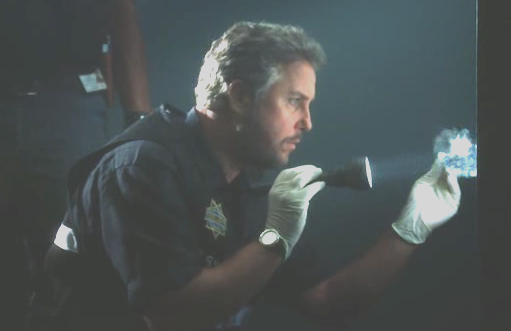 Gilbert "Gil" Grissom, Ph.D. is a portrayed by on the American TV "".

Grissom is a forensic entomologist and the night-shift supervisor of the CSI () team, investigating crimes in and around the city of Las Vegas. He plays an important role in the show and could be considered the .

"" producer and writer considers Grissom the center of the show [ [http://featuresblogs.chicagotribune.com/entertainment_tv/2006/05/solving_the_mys.html Chicago Tribune "Solving the mystery of the 'CSI' finale shocker"] par.19 approx. Retrieved on 2007-10-22. ] and in the seven years the show has been running he has appeared in every episode, except in "", from , "", from , and two others from : "Sweet Jane and "Redrum". In early season 6 he became romantically involved with subordinate CSI .

He is ranked at number 82 on Bravo's Greatest Television Characters of All Time along with . [http://www.bravotv.com/The_100_Greatest_TV_Characters/index.shtml]

While being interviewed for UK TV channel , series creator mentioned that the character was originally intended to be named Gil "Scheinbaum", but after Petersen was cast, Zuiker decided he was 'insufficiently Jewish' for the name and along with Petersen decided to rename the character for , whom Petersen is a great admirer of, and Gil because of one of the actor's hobbies, . [ [http://www.csifiles.com/news/070903_01.shtml CSIfiles.com-"Petersen Explains How Gil Grissom Got His Name"] Retrieved on 2007-10-22. ]

In 2000, the head of drama development at saw potential in the pilot script of "CSI", so she passed it on to actor , who had a with the network. Petersen has said that many TV shows were offered to him over the years, but he “didn’t want to get locked down". "CSI" appealed to him, due to the complexity of the role of Grissom, a character from whom he would be able to learn a lot, an interesting role that would not become boring over the years. [ [http://www.televisionheaven.co.uk/csi.htm Television Heaven-"CSI"] Retrieved on 2007-10-22. ] [ [http://featuresblogs.chicagotribune.com/entertainment_tv/2006/09/post.html Chicago Tribune-"Bound for home"] para.135 approx. Retrieved on 2007-10-22. ]

Gil Grissom was not the first scientist portrayed by . In the 1986 film "Manhunter" Petersen portrayed a forensic scientist named Will Graham who has the ability to empathize with psychopaths, such as . Coincidentally, Graham pursues serial killer , played in Petersen's film by . Noonan also played a clever villain pursued by the CSIs in "".

Gil Grissom first appears in "" on the pilot episode. After this he has appeared in almost every single episode throughout the show's eight years, except in "", from , an episode that turns entirely around ; besides him, only three other regular characters appear. ["". , (writers) & Bill Eagles (director). "CSI". . 2005-04-21. Season 5 Ep. 2.]

Again, William Petersen did not appear during the episode "". This episode was originally going to be how Grissom was convinced that an abduction victim was still alive. When Petersen's nephew died, he flew home and was unavailable for the filming of the episode, which turned out being centered around Nick. [ [http://www.tv.com/csi/gum-drops/episode/488541/summary.html TV.com episode summary] Retrieved on 2007-10-22. ]

During 2007 ("CSI"'s ) took a break from "CSI" to appear in a five week run of the production of "" in , resulting in Grissom taking a sabbatical, being replaced by , as , who developed a small through "Sweet Jane", "Redrum" and "".

, one of the show's producers and writers considers Grissom the center of the show. [ [http://featuresblogs.chicagotribune.com/entertainment_tv/2006/05/solving_the_mys.html Chicago Tribune-"Solving the mystery of the 'CSI' finale shocker"] paragraph 19 approx. Retrieved on 2007-10-22. ] He does play an important role on most episodes, although he is not always the center, for example both "" episodes, which center around Nick, there is also "", "" and "" which center around Catherine.

The GSR ("Grissom and Sara Romance"; the abbreviation is a pun on the term for , often mentioned in "CSI") has accumulated an extensive fan base during the years with some sites getting thousands of viewers a week. [ [http://www.grissomsararomance.com/ GSR:GrissomandSaraRomance.com] Retrieved on 2007-10-22. ] Some fans consider this "ship" very similar to the one of Mulder and Scully in the "". From the beginning, both shows showed a lot of chemistry between the two co-workers, leading viewers to assume that a relationship between the two would soon begin, when in fact it would take years of a platonic relationship and sexual tension for something to actually be seen, with both couples only sharing their first on-screen kiss in the eighth season of their respective shows.

In August 2007, upon rumors of leaving the show, a campaign started. [ [http://community.tvguide.com/blog/TVGuide-Editors-Blog/Ausiello-Report/700000049 TVguide-"Ausiello Report"] Retrieved on 2007-10-22. ] Thousands of fans that want to save "the GSR" and Jorja Fox, have donated to the cause, collecting over $8,000 for gifts and stunts targeted at CBS executives and "CSI"s producers and writers. Some of the stunts included a wedding cake delivery to , 192 chocolate-covered insects with the message "CSI Without Sara Bugs Us" to and a plane flying several times over the of Los Angeles with a "Follow the evidence keep Jorja Fox on CSI" banner. [ [http://www.dollarforsense.com/Flyover.html Flyover pictures and videos] Retrieved on 2007-10-22. ] Another side of the campaign includes mailing the show's producers a dollar, so as to save Fox's contract "one dollar at a time". As of October 16, according to the site's running tally, more than 20,000 letters with money or flyers have been mailed to the Universal Studios and to CBS headquarters in from forty-nine different countries since the campaign started on September 29. [ [http://community.tvguide.com/blog-entry/TVGuide-Editors-Blog/Ausiello-Report/Exclusive-Csi-Boss/800024964?forumID=700000049& TVguide - CSI Boss Vows Jorja Fox is "Coming Back] Retrieved on 2007-10-22. ] [ [http://www.sptimes.com/2007/10/16/Tv/_CSI__fan_says_losing.shtml 'CSI' fan says losing Sara would be a crime] Retrieved on 2007-10-22. ]

On September 27, 2007, after "CSI"'s season eight premiered, a miniature model of Gil Grissom's office (which he was seen building during ) was put up for auction on . The auction ended on October 7 with the prop being sold for US$15,600, which CBS donated to the National CASA Association. [ [http://cgi.ebay.com/ws/eBayISAPI.dll?ViewItem&rd=1&item=280154305542&ssPageName=STRK:MESC:IT&ih=018 CBS CSI Gil Grissom’s rare office replica TV prop] Retrieved on 2007-10-22.]

Grissom was born on August 17, 1956 in to a middle-class family and grew up in Marina Del Rey, California. His father was a and his mother ran an in . Grissom's father died when he was nine years old, most likely from . His father inspired his love of the natural sciences. [Marrinan and Parker (2006), p. 22]

He was raised Roman Catholic. He told in a episode that, while he is not really a practicing Catholic anymore, he practices a sort of " Catholicism, which implicates ritualizing aspects of everyday life and then viewing them with a spiritual intensity they would not otherwise possess". ["Double-Cross". Marlane Meyer (writer) & Michael Slovis (director). "CSI". . 2006-10-19. Season 7 Ep. 5.] During one case, a priest asked him if he was still a practicing Catholic. Grissom asked the priest how he knew he was since the subject didn't come up. The priest responded, "When you greeted me, you said 'Father.' Only Romans do that. People of other faiths say 'Reverend' or 'Minister'."

Growing up he became an avid reader and an scientist, conducting necropsies on the corpses of animals he found in the neighborhood. In a episode he told Warrick that in high school, he was a "ghost", meaning that he did not belong to any group in particular. ["Ellie". &Charlie Correll (director). "CSI". . 2001-12-6. Season 2 Ep. 10.] When he was in college, Grissom financed his first with his winnings from a high stakes game. ["". [Anthony E. Dannie Cannon (director). "CSI". . 2002-9-26. Season 3 Ep. 1.] At the same time, he also attended matches to learn about the patterns of bruise formations on bodies and eventual blood spatters from the injuries.

He became a forensic entomologist, earning his degree in from UCLA. Grissom has a PhD, but it is not made clear in what or where from. [ Season 1 Ep. 5.]

He became the night shift team supervisor for the Las Vegas CSI unit on the second episode of the series, after got demoted following the death of co-worker Holly Gribbs. ["Cool Change". (writers) & (director). "CSI". . 2000-10-13. Season 1 Ep. 2.]

Evolution through the years

Grissom in the series is often regarded as well-educated, but unusual in his approach toward his work and social life. In the series, some of his comments and actions can be seen to dumbfound his co-workers and superiors. His relationship with his subordinates in the office is portrayed as being a to the team, however very professional in his work.

Grissom claims to have never hired a prostitute for sex, stating that sex is intended to create a human emotional connection. He has also expressed distaste for carrying a firearm when on the field, a tendency that has brought several scoldings from co-worker . ["Ending Happy". Evan Dunsky (writer) & (director). "CSI". . 2007-4-26. Season 7 Ep. 21.] Despite this, he has proven to have an exceptional accuracy at the firing range. ["". , (writers) & (director). "CSI". . 2003-9-25. Season 4 Ep. 1.]

He once listed his hobbies to : "I have outlets. I read. I study bugs. I sometimes even ride roller coasters". ["Slaves of Las Vegas". (writer) & (director). "CSI". . 2001-11-15. Season 2 Ep. 8.] Indeed, he has proven to be a very cultured man on many occasions, having a wide knowledge of , and . He often offers quotes from a variety of literary sources, including and . Later in this , he reveals himself to be a fan. Sara notes that this is typical of Grissom, saying that he would like "all those stats". ["Primum Non Nocere". , (writers) & (director). "CSI". . 2002-1-31. Season 2 Ep. 16.] However Grissom is not too familiar with . In "" was talking about a TV program which he thought had already "jumped the shark" but Grissom didn't know the term "jumping the shark". While trying to explain, Brass says, "Remember the ?", which Grissom didn't know either.

Being an , he has a wide and varied knowledge of insects, which he applies to his investigations. This has led to his nickname, "The Bug Man". In the beginning of the show, he was referred as "Gruesome Grissom" for his sometimes morbid fascination with the more bizarre aspects of man and nature. Grissom keeps a variety of specimens in his office, including a radiated , a , and a two headed . He also has a bulletin board that looks like a fish on which unsolved cases go: "the ones that got away". ["Who Are You?". , (writers) & (director). "CSI". . 2000-11-10. Season 1 Ep. 6.] Occasionally, he keeps evidence from closed cases (such as the models created by ""). In , CSI newcomer takes a look around Grissom's office and observes that he must be quite a freak. ["Sweet Jane". , (writers) & (director). "CSI". . 2007-1-18. Season 7 Ep. 12.]

Relationships with other characters

In the sixth season episode "Bang-Bang" Grissom tells Doc Robbins (concerning a woman shot in the mouth) "This was someone who was emotionally close to her." Doc Robbins asks him if he's ever even been close to getting married. Grissom tells him about "Nicole Daley", who like him was interested in bugs. He goes on a bit about her, then says, "Second grade."

Grissom may not ask to take on the role of mentor, but it seems to happen naturally, going all the way back to when they first met in , then and in Vegas. Although he can be annoyed with his protegés at times, he is visibly proud when they succeed, as Greg did by passing his field test and becoming a CSI. ["Who Shot Sherlock?". , (writers) & (director). "CSI". . 2005-1-6. Season 5 Ep. 11.]

on the episode "Invisible Evidence".] In season four Grissom's true feelings are revealed in "", an episode that centers entirely around him discovering his sentiments for Sara. It was then that he admitted not being able to risk his career to be with her. ["Butterflied". (writers) & (director). "CSI". . 2004-1-15. Season 4 Ep. 12.] In this season Sara apparently develops a drinking problem, which Grissom acknowledges on the season finale; after this they would hardly see each other, and Grissom becomes interested in detective .

In mid-season five, Sara is suspended for insubordination and she reveals to Grissom her tormented childhood. He refuses to fire her and has her working in every case of the next two seasons with him. ["Nesting Dolls". (writers) & (director). "CSI". . 2005-2-3. Season 5 Ep. 13.]

It has been confirmed by that the first ten episodes of the upcoming of "CSI" will be the last with as a regular. [ [http://www.cnn.com/2008/SHOWBIZ/TV/07/16/petersen.csi.ap/index.html "William Petersen's run on 'CSI' coming to end"] - CNN.com. Retrieved on 2008-07-22.] Negotiations proceeded regarding who is to replace him, and while it has been confimed that was approached about the part, he is no longer being considered. has since been confirmed to replace Petersen. [ [http://www.suntimes.com/entertainment/zwecker/1057686,CST-FTR-zp16.article "Petersen pulls 'CSI' plug"] - Chicago Sun-Times. Retrieved on 2008-07-22.]