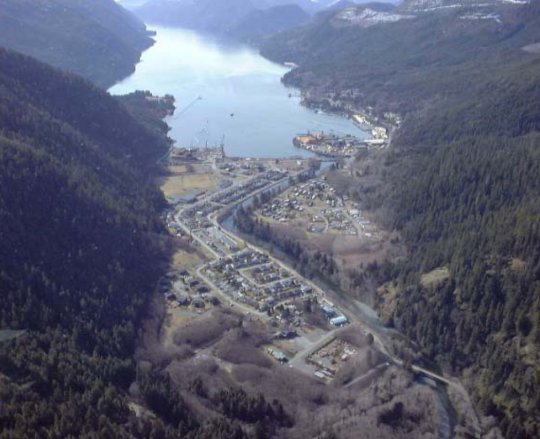 The village is situated at the head of the steep-sided Tahsis Inlet (part of ). The inlet is protected from Pacific storms by its geography, making the docking facilities a valuable asset.

While peoples have inhabited the area for over 4,000 years, Europeans first visited Tahsis in 1774 (Spanish) and 1778 (English). , an English , spent several winters here at the beginning of the nineteenth century as the slave of . Jewitt's memoirs, "A Narrative of the Adventures and Sufferings of John R. Jewitt, only survivor of the crew of the ship Boston, during a captivity of nearly three years among the savages of Nootka Sound: with an account of the manners, mode of living, and religious opinions of the natives" [ [http://www.canadiana.org/ECO/PageView?id=61e2e3383b28d7d0&display=29581+0003 Early Canadiana Online - Page Image ] ] is a major source of information about the in general, and life in Tahsis in particular.

In the 1930s many companies tried unsuccessfully to open operations on the west coast of Vancouver Island. There were several advantages to building at Tahsis: there was a level plateau at the head of the inlet with easy deep-sea access for ocean-going vessels. The site faced southeast, getting maximum sunlight to protect the freshly cut lumber from mould due to the rains.

In 1937 started operations at what was initially called "Port Tasis", a name chosen by them in loose consultation with local First Nations. At the time, Nootka Wood Products was cutting approximately 150,000 feet of lumber daily, all for export. ["Port Tasis Newest West Coast Centre". "Vancouver Province". 1 November, 1937. p. 21]

Subsequently, a Tahsis mill was built by the Gibson Brothers in 1945. It burned down in 1948, but in January 1949, Gibson Mills and East Asiatic Company formed a partnership (Tahsis Company) and by April a new mill was back in production. Before the mill was demolished, it was owned by .

In 1962, it was reported that the Tahsis Lumber Company had "prohibited the import of all cars except one very small [un-named] German make" but that motorists "have one advantage over most: since their cars run only on private property they don't need a licence". [ "Cars are small at Tahsis but need no licence", Donald Stainsby, "The Province", 17 March 1962, p. 29]

Tahsis remained a company community until it was incorporated as a in 1970. A road connecting Tahsis with was completed in 1972. Until that time the village was accessible only by boat or aircraft.

In Tahsis's heyday the population was roughly 2,500. With the closure and dismantling of the mill the population declined to 892, according to the 2001 census. , the population is approximately 300, with fewer than 50 students from Kindergarten to Grade 12.

The members of the Mowachaht/Muchalaht, Nuchatlaht and Ehattesaht are the Nuu-chah-nulth-speaking tribes whose traditional territories included all of the area known today as . The Nootka Sound First Nations' territories are bounded on the north by those of the Kyuquot/Cheklesahht, and on the south by those of the Hesquiaht. Archaeological evidence confirms the occupation of the region for over 4,200 years.