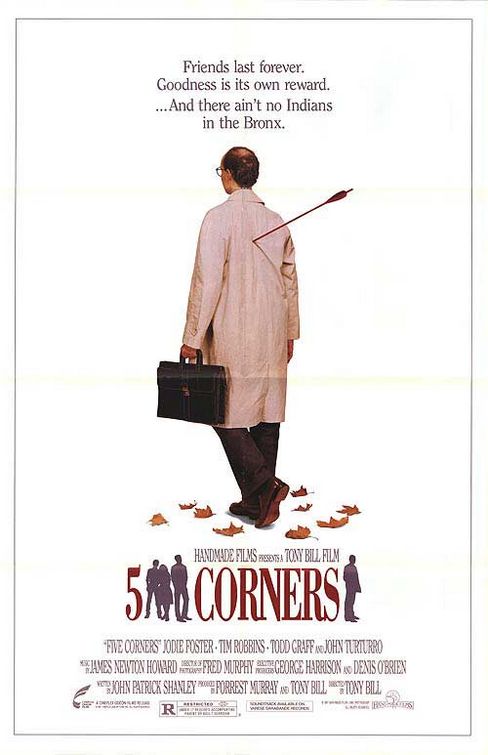 The action is set in in 1964. A man who appears to have tired of two women he knows gives them to two strange teenage boys, and even pays them five dollars to take them. Later these women wake up in an apartment under sheets without any clothes on.

Turturro's character, Heinz, has just been released from prison and is out to stalk Linda, Foster's character. Robbins's character, Harry, had protected Linda the last time Heinz tried to rape her. He has now become a Buddhist and a pacifist, making protecting Linda again a difficult task. Heinz calls Linda, and tells her to meet him in a park at midnight. She reluctanly agrees, knowing that he may become dangerous if she doesn't comply. When arriving at the pool, she finds a board to use for protection and hides it. Heinz shows her a present he got for her: two penguins he stole from the Bronx zoo. She tells him that he has to return them because penguins need special food. Heinz becomes outraged, thinking that she was rejecting his gift, and kills one of the penguins.

The movie ends with Heinz taking an unconscious Linda to a rooftop, where police secure the building. A sharpshooter is able to kill him but doesn't because it would have endangered Linda's life. Heinz is killed by a mysterious arrow to his back.

*It is the second movie in which Tim Robbins and Jodie Foster star together, after "The Hotel New Hampshire".
*Foster's character, Linda, was almost raped by Heinz before he went to jail. The next year Foster would play a rape victim in "The Accused", which she won an Academy award for.
*Linda is stalked by a dangerous madman who gave her a gift she did not want. Foster herself was stalked by would be presidential assassin , who shot Ronald Reagan in an attempt to impress her.