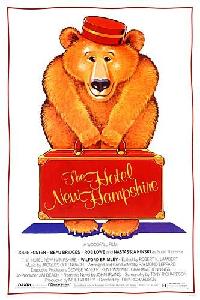 
"The Hotel New Hampshire" is a 1984 based on a 1981 novel of the same name by . The film was directed by (who also wrote the screenplay) and stars , and . The film also features , , and a young in a supporting role.

In an introductory foreword that he wrote for a later edition of the novel, author Irving stated that he was thrilled when Richardson informed him that he wanted to adapt the book to the screen. Irving wrote that he was very happy with the adaptation, complaining only that he felt Richardson tried to make the film "too" faithful to the book, noting the manner in which Richardson would often speed up the action in an attempt to include more material onscreen.

"The Hotel New Hampshire" is narrated by John Berry (Lowe) and opens in to the time when his parents met and fell in love while working summer jobs at a hotel around . They are brought together by Freud, a European refugee who travels with a performing bear.

In the 1950s, Win Berry (Bridges) and his wife () have five children, John, Franny (Foster), Frank (), Lilly () and Egg (Green). The Berrys decide to open a hotel near the prep school that John, Franny and Frank attend. They call it the Hotel New Hampshire. Among the things that happen: John loses his to the hotel maid; Frank comes out to Franny and John; Franny is raped by BMOC Chipper Dove () and his buddies and is rescued by Junior Jones () and other black members of the school football team; John confesses that he's in love with Franny; the family dog, Sorrow, dies and Frank has him stuffed. Sorrow's reappearance at Christmas causes Berry grandfather Iowa Bob (Brimley) to suffer a heart attack and die.

A letter arrives from . It's Freud, inviting the Berrys to move to Vienna and run Freud's "gasthaus". The family flies to Europe; tragically, the plane carrying Mrs. Berry and Egg explodes, killing them.

In Vienna, the family moves into the "gasthaus" and renames it Hotel New Hampshire. An upper floor houses s and the basement is occupied by radicals of various political stripes. Assisting Freud, who has gone blind, is Susie the Bear () a young woman who lives her life almost completely in a bear costume. One of the radicals, Ernst, resembles Chipper Dove (and is also played by Modine) and Franny becomes infatuated with him. Susie, who's quickly fallen in love with Franny, and John try to keep Franny away from him. Susie is initially successful in seducing Franny but soon she ends up with Ernst. Lilly, who's a dwarf, begins writing a novel called "Trying to Grow".

One of the radicals, Miss Miscarriage (Plummer), grows very fond of the family and especially of Lilly. She invites John to her flat and sleeps with him, then warns him to get the family out of Vienna. For her trouble, another of the radicals murders her. Back at the hotel, John and the rest of the family are caught up in the radicals' plan to blow up the with a . The blind Freud, to spare the family, volunteers to drive with one of the radicals. As he leaves, the Berrys attack the remaining radicals and Freud detonates the bomb right outside the hotel. Ernst is killed and Win is blinded in the explosion.

Hailed as heroes by the Austrians, the Berry family decides to return home. Lilly's novel is published and the interest in the Berry's story leads to a biopic, written by Lilly and starring Franny as herself. The Berrys are in when John and Susie run into Chipper Dove on the streets. They lure him to their hotel suite and take their revenge upon him, including apparently having Susie sodomize him while she's in her bear costume, until Franny calls it off.

Meanwhile, John's love for Franny has not abated. She finally calls him over to her room and, in hopes of getting him over it once and for all, has sex with him for almost a day.

Franny's career is beginning to take off, with Frank acting as her agent and with Junior Jones back in the picture, but Lilly's writing career has stalled. Her second novel is not well received and, depressed and suffering from , she takes her own life.

As the film draws to a close, John is staying with his father at the latest Hotel New Hampshire, which stands empty. Susie comes to stay with them and she and John become involved. Win heartily approves because, as he puts it, every hotel needs a bear.

This phrase recurs throughout the film as a among the Berry family. It is drawn from a story that the Berry parents tell their children, about a street performer called "The King of Mice." Saying "keep passing the open windows" is the family's way of telling each other to persevere. Lilly kills herself by jumping, having failed to pass that open window.

The rock band Queen was asked by producers to compose a song for the movie. and his bandmates composed the song "Keep Passing The Open Windows" that ended up on their 1984 album "The Works", but didn't make it in the movie.

Many outdoor scenes were shot at the Hotel Tadoussac : [http://www.hoteltadoussac.com] .
is a village of 857 inhabitants (2005) in , which was once an important seventeenth century French trading post.

"The Hotel New Hampshire" was released on Region 1 on , .