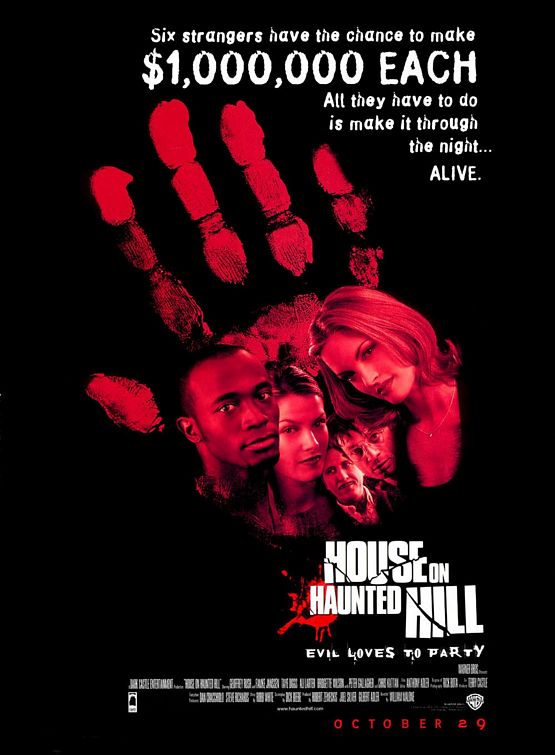 "House on Haunted Hill" is a 1999 , directed by William Malone and starring , , , and . Produced by and , it is a of the 1959 film of the same name directed by , borrowing elements from the 1973 classic "Don't Look in the Basement". "House on Haunted Hill" marks the producing debut of , a that went on to produce "" and "House of Wax", two films which were also remakes of William Castle's films.

The film is often compared with "The Haunting", another 1999 remake of a similar film from 1963, based on the novel "". Also worth noting, in comparison to the original, while William Castle's version leaves a degree of ambiguity as to the presence of ghosts in the building, the remake leaves no doubt whatsoever.

The film was followed by a , "", which was released in both rated and unrated editions on in 2007.

The film sets the action in an abandoned asylum, The Vannacutt Psychiatric Institute for the Criminally Insane, where mass-murders were undertaken in the past. The head of the facility, Doctor Richard B. Vannacutt (), performed grotesque experiments and medical procedures on the patients, killing many of them in the process. The hospital was shut down when many of the so-called "patients" escaped, killing almost the entire staff and burning the hospital. Vannacutt had rigged the building with numerous iron gates activated by cranks and levers to serve, for the most part, as barriers to keep patients from leaving the building, should they escape. Some of these barriers are subject to huge clock-like timers that would not open for twelve hours. During the fire, he released these gates keeping the inmates, employees and the fire itself contained. After several unexplained deaths during reconstruction on the house, mostly the owners of the house, it was dubbed The House on Haunted Hill.

The story centers around the disintegrating marriage of Evelyn (), a spoiled who epitomizes and Steven Price (), an mogul with a wicked sense of humor, each of whom would cheerfully kill the other. Evelyn fancies spectacular parties, so Steven leases the house from the owner, Watson Pritchett () descendant of the house's owners, for his Halloween birthday bash. Steven was supposed to send out the invitations from the two-page list of names given him by Evelyn. However, invitations were sent to only five people - Jennifer Jenzen (aka Sara Wolfe) (), Eddie Baker (), Melissa Margaret Marr (), Dr. Donald Blackburn (), and Watson Pritchet (). When the guests arrive, neither Evelyn nor Steven (seemingly) know who they are. Despite this, Price continues the party's theme, offering a million dollars to anyone who stays in the house and survives until morning, with any person not making it having his money added to the winners' pot.

Shortly after, the security gates are tripped, sealing itself shut and locking everyone inside, forcing them to remain there until the gates reopen in the morning. Initially this is a gimmick orchestrated by Carl Schecter (), a company employee who develops a series of harmless traps meant to scare the guests. Things swiftly become much worse than a few harmless scares. What follows is the slow, and often bloody, demise of several of the guests and hosts in various ways, courtesy of the evil spirits of the house. It is discovered that the spirits in the house created the party list to include the descendants of the five members of Vannacutt's staff that didn't die at the hospital when it burned. After Steven attempts to kill his wife Evelyn for orchestrating his murder plot, the two accidentally unleash the darkness of the house when he throws her through an ancient and decayed door. The Darkness is a dark shape shifting creature comprised of all the spirits in the house. This force comes after and tries to kill all the surviving guests to trap them in a permanent purgatory within the house.

It starts by assimilating Evelyn into itself (killing her) while Price watches in horror. He backs up and bumps into a glass case with Melissa Marr's dissected body on display. While this is happening, the Darkness creeps out of the hole in the door, and after Evelyn (now a part of the Darkness) reveals how the restless and evil souls that comprise the Darkness wants to feed on all those "who are responsible", it proceeds to try to assimilate him as well. Upstairs, Pritchet, Eddie, and Sara are trying to open one of the iron gates on the window when they hear Price's terrified screams at the door down the hall. Pritchet proceeds to go get it, while on the other side of the door, the Darkness catches up with Price. Price jumps out the way at the same time as when Pritchet opens the door and the Darkness surges forward. It then proceeds to seemingly assimilate Pritchet and flows away. Price runs through the hall while Sara and Eddie follow him, trying to figure out how he is alive when Sara supposedly shot him to death (he wore a bullet-proof vest). Price then turns to them and tells them that what Pritchet had been saying all along was true: the house was alive and had killed everyone (except Dr. Blackburn, who was murdered by Evelyn and had his head cut off to frame Price). He then figures that the only way to get out is to go to the attic and activate the pulleys that sealed off escape from the house. Price runs ahead of them to activate them while Sara and Eddie stay behind in disbelief at what is happening. This is quickly shattered when the Darkness seeps through the actual house and tries to use it to kill them. As they are running up the stairs to the attic Sara trips, and the Darkness uses Melissa's form to try to lure her to it (Melissa is really in torment, unlike the others that were assimilated, as seen when the Darkness corners Eddie). Price by then had activated a pulley that revealed an opening in the window of the attic. Eddie and Sara get there, while the Darkness seeps up the cracks of the wooden floor, and Sara lingers while Eddie goes to the opening. Eddie looks back from the window to find that the Darkness had arrived and was attempting to sever the rope that kept the iron gate open. While Eddie rushes back to get Sara, the Darkness tries to assimilate her and instead assimilates Price, who had sacrificed his life to get Sara out of the way. At the sound of this, Pritchet's ghost appears (separate from the Darkness) to pull the rope needed to open the iron gate, at which Sara pulls Eddie through as the Darkness goes to assimilate him. After he is pulled through, the gate shuts, Pritchet's ghost disappears and the Darkness disappears into nothingness. As Sara and Eddie sit in exhaustion over the night's events, they notice that an envelope has been pushed through the gate, containing five checks for $1 million each. After they laugh at their success, Sara asks "One more thing, how do we get down from here?" After the credits, a film is shown with the patients finally getting their revenge on the Prices.

A scene that was deleted and not shown on the DVD was of Sara and Eddie being saved by the Coast Guard at the end of the movie. It was cut because director William Malone believed it didn't fit in with the movie and didn't suit the ending. There were also a couple of scenes in the trailer that were not shown in the movie or on the DVD.

On the DVD release of the film were 3 deleted scenes:

ara Gets the Invite

This scene explains how Sara got the invitation and why she pretended to be someone else at the party. There are two versions of this scene on the DVD. One that takes place in on a street in front of a house, and another that takes place in a field located by the studio where the movie was filmed.

In version one, Sara plays the assistant to Jennifer Jenzen, the rude, foul mouthed executive V.P. of Lathrup International Pictures. While on the set of a movie, she interrupts the shooting by yelling at the director, forcing him to cut. She then gets a crane operated box that gives her a finger cut when she ignores the warning on the box and rotates a wheel that opens it up. Sara laughs and is fired. For severance pay, Jennifer gives the box to Sara. She then notices the invitation to the party, but fails to give it to Jennifer when she tells off Sara.

Version two is basically the same, except that it takes place in a field. There are some slight differences in dialog, with some lines being added, and some being changed.

This scene happens during the chase between The Darkness, Eddie, and Sara. In it, Sara falls into a hole in the floor, caused by The Darkness, and lands in a subterranean cavern filled with dirt and skeletons. The Darkness then brings the skeletons to life, and they pull off the jacket that she's wearing. Eddie then rescues her by pulling her up out of the cave.

This is why the jacket disappears from Sara during the chase.

This was supposed to be the ending scene. In it, Sara's boss Jennifer Jenzen, and a real estate agent comes to see the House, that was left to her in a will. She walks into the house alone, the door closes behind her, and she screams. The scene then goes back to the real estate agent (whose face was not shown until now) who turns to the camera, revealing himself to be Dr. Vannacutt.

released the sequel "" on DVD on October 16, 2007. The film has some ties to the first with one of the main characters being related to Ali Larter's character. With also a few mentions to the events in the first film and the characters Sara Wolfe and Steven Price.

The credits features a cover of "Sweet Dreams" by .