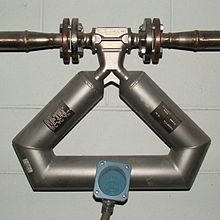 The mass flow meter does not measure the volume per unit time (e.g., cubic meters per second) passing through the device; it measures the mass per unit time (e.g., kilograms per second) flowing through the device. Volumetric flow rate is the mass flow rate divided by the fluid density. If the density is constant, then the relationship is simple. If the fluid has varying density, then the relationship is not simple. The density of the fluid may change with temperature, pressure, or composition, for example. The fluid may also be a combination of phases such as a fluid with entrained bubbles.

The animations on the right do not represent an actually existing coriolis flow meter design. The purpose of the animations is to illustrate the operating principle, and to show the connection with rotation.

The animation on the right represents how curved tube mass flow meters are designed. When the fluid is flowing, it is led through two parallel tubes. An actuator (not shown) induces a vibration of the tubes. The two parallel tubes are counter-vibrating, to make the measuring device less sensitive to outside vibrations. The actual frequency of the vibration depends on the size of the mass flow meter, and ranges from 80 to 1000 vibrations per second. The amplitude of the vibration is too small to be seen, but it can be felt by touch.

When no fluid is flowing, the vibration of the two tubes is symmetrical, as shown in the animations.

Vibration pattern of the tubes when there is mass flow.
double sized version

The mass flow of a u-shaped coriolis flow meter is given as:

Such an instantaneous density measurement in turn allow us to calculate the flow in volume per time, by dividing mass flow with density.

Both mass flow and density measurements depend on the vibration of the tube. This depends on the rigidity of the tube which in turn depend on its temperature. Calculations must therefore take the temperature of the fluid into account.