The Type 81 assault rifle was the principal automatic rifle used by the Chinese People's Liberation Army from the mid-1980s until 1995. It incorporates elements of the Dragunov Sniper Rifle, SKS, and AK series rifles in general looks. The rifle is cosmetically influenced on the Type 56 license produced AK-47, but with a significantly different design and improvements to reduce the recoil and muzzle jump, giving better firing accuracy. The Type 81 rifle retains the general layout of AK-47 but isn't an improved variant of the license produced AK-47 the Type 56, some major difference is the positioning of aiming sights and stock of the rifle.

The most easily distinguishable feature is an exposed muzzle part of the barrel. The foresight moved back for a modification to fire rifle grenades from the barrel. There is a significant gap between the trigger guard and the magazine on Type 81 rifles, while on the Type 56 series the magazine is adjacent to the front of the trigger guard. The Type 81 rifle is a short-stroke gas-operated design, while the Type 56 are long-stroke designs. On Type 81 rifles the non-detachable spike-shaped bayonet was also replaced with a detachable knife-bayonet. The Type 81 can be fed from the older Type 56 30-round magazines, or from 75-round drums intended for the Type 81 light machine gun.[1]

The Type 87 was replaced in PLA frontline service by the QBZ-95, a bullpup rifle chambered for the 5.8x42mm DBP87 cartridge, in 1995 and is now reserved for secondary forces, though rapidly being replaced also.

The weapon was introduced into PLA service in 1981 but did not become widely distributed until the late 1980s. It replaced the Type 56 rifle. Its first combat use came during the Sino-Vietnamese border conflicts of the mid 1980s.

Unlike its predecessors, the Type 81 is a series of weapons. The Type 81 and Type 81-1 are assault rifles and the heavier Type 81 squad machine gun is used in the squad automatic weapon role.

The Type 81-1 is similar to the Type 81 but has a foldable stock. The Type 81 squad machine gun is heavier (5.15 kg), has a longer barrel, slightly higher rate of fire (700 rounds per minute), and fires from either the standard 30 round magazine or a 75 round drum. From field and combat results, the feedback from PLA and foreign users, the accuracy of the Type 81 is better than that of the license produced AK-47 and is closer to that of the American M-16, but still retaining equal reliability. The Type 81 has been exported to various countries, primarily Asian and African. 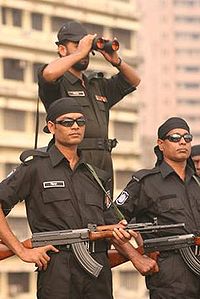 A prototype called the Type 87 was introduced in the late 1980s. It served as a development platform for the next generation of PLA small arms, being used as a test-bed for the then new 5.8x42mm DBP87 ammunition. It never went into full-scale production but has been in service with PLA special forces.

The PLA is in the process of replacing the Type 81 with the Type 95 or Type 03 series of weapons, but full conversion is not expected until the mid-2010s.