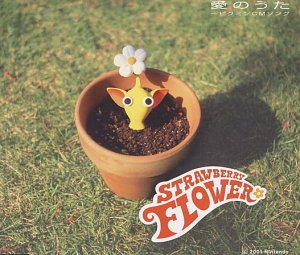 nihongo|"Ai no Uta"|愛の歌|Song of Love is an released in conjunction with the "" for the GameCube. The song was only used in commercials for the game and does not appear in the game itself, and those commercials appeared only in . A small clip of the song though can be heard being sung by the Pikmin in "", and the song is one of the first ones available for the Distant Planet stage in "" [cite web | url=http://www.smashbros.com/en_us/music/music22_list.html| title=First Songs in My Music - Smash Bros. DOJO!! | work= Nintendo] . The lyrics are in Japanese. The song is sung by the group , who also produced the theme song for "". The title of the song translates to "Song of Love," so named because the song expounds on the emotions the Pikmin feel in relation to their involvement in the game.When translated some of the lyrics include something like this.

:"Plucked from the ground, gathered together, and ignored":"Yet we don’t ask that you love us"

The Pikmin are depicted to feel a kind of sadness, but also devotion to their given task of helping the game's , .

The song was featured in commercials for the "Pikmin" video game, in order to stimulate flagging sales. The song became immediately very popular and soon became one of the most recognizable songs in Japan at the time. Many people had memorized the song from the commercials, and soon after the sales of the video game rose nearly fivefold. The song itself was released as a on , and remained in the top ten for several weeks. Unexpectedly, the song actually outsold the game it has advertised, beating "Pikmin's" sales figures shortly after its release as a single. The song was a remarkable media phenomenon in that it sold equally well to audiences of all ages and tastes. The largest purchasing of the song was d men.

The b-side song, nihongo|"Namida Ga Afureta"|涙があふれた|Full of Tears, was the game's opening theme song, and was up-beat.

This single is rare and .

Members at the Time of Single

On this planet, where so many life forms live, /Today once again we'll carry, fight, multiply and then be eaten. /Uprooted, we'll gather, and be thrown. /But we won't ask you to love us.

We'll work together, fight, and be eaten, /But we'll follow you forever. /We'll fight, be silent, and follow you, /But we won't ask you to love us."

The song can be heard in the Distant Planet stage in (there is also a version).

The video was directed by , the president and CEO of . It mainly focuses on the Yellow Pikmin standing in front of a Toadmin decorated with TVs showing lightning that represents the emotions the Pikmin feel in relation to their involvement in the game. It was shot on , .