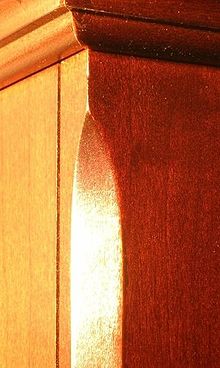 A chamfer with a lark's tongue end

A chamfer is a beveled edge connecting two surfaces. If the surfaces are at right angles, the chamfer will typically be symmetrical at 45 degrees. A fillet is the rounding off of an interior corner. A rounding of an exterior corner is called a "round"[1] or a "radius".

"Chamfer" is a term commonly used in mechanical and manufacturing engineering. Special tools such as chamfer mills and chamfer planes are available. In tile work, or furniture such as counters or table tops, an edge or arris that has been eased by rounding instead of chamfering is called a bullnose. Where a chamfer does not go to the end of the piece, but "lifts out" in a smooth curve, the end is called a lark's tongue.

An example of chamfering is part of the process of hand-crafting a parabolic glass telescope mirror. Before the surface of the disc can be ground, the edges must first be chamfered to prevent chipping. This can be accomplished by placing the disc in a metal bowl containing silicon carbide and rotating the disc with a rocking motion. The grit will thus wear off the sharp edge of the glass.

In the realm of architecture, the base of the Taj Mahal mausoleum in Agra, India, is a cube with chamfered corners, thereby creating an octagonal architectural footprint.

Many street corners (curbs) in Barcelona, Spain, and in Ponce, Puerto Rico, are chamfered. This allows for the turn while driving to be somewhat more comfortable as drivers do not need to slow down as much when making a turn as they would have to if the corner was a square 90 degrees. It also reduces the likelihood of tire damage.

In printed circuit board (PCB) design

In printed circuit board (PCB) designing, a chamfer occurs when a right-angled edge is eliminated from the tracks, to strengthen the places where a track meets another at a right angle. It also reduces reflections; important for high-frequency design.