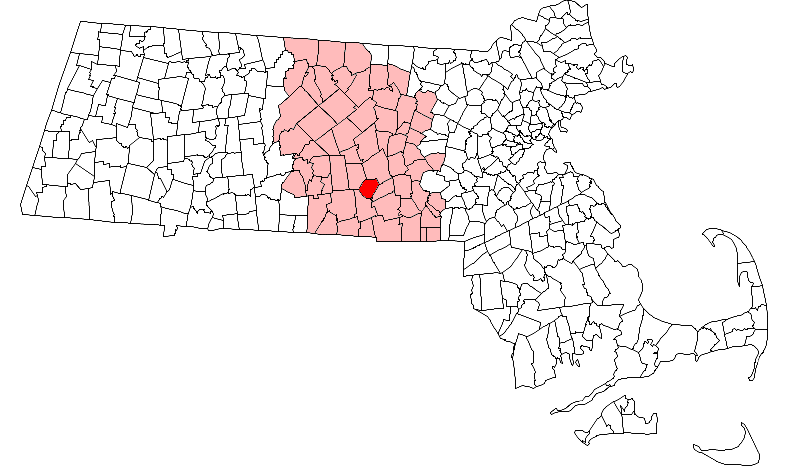 Auburn was first settled in 1714 and was officially incorporated in 1778 as the town of Ward, in honor of General . The town changed its name to Auburn in 1837, after the Post Office complained that the name was too similar to the nearby town of Ware.

Before incorporation, most of Auburn was known as the South Parish of Worcester; other portions fell within the town limits of Leicester and Millbury.

launched the first liquid-fueled rocket from his Aunt Eiffie's farm in Auburn on , . Goddard is commemorated in Goddard Memorial Park located downtown next to the Auburn Fire Department Headquarters.

In this park there is a model of Dr. Goddard's prototype liquid fueled rocket and a Polaris Ballistic Missile (Type A-1). Across the street at the Auburn High School stands a mini version of the prototype.

In addition, there is a small memorial commemorating the feat on the actual site where Goddard launched his rocket. [ [http://www.nps.gov/nhl/designations/Lists/MA01.pdf National Historic Landmarks Survey, by State - Massachusetts] see page 8, accessed Oct. 19, 2007] (The memorial is located between the 1st and 9th holes on Pakachoag Golf Course.)

There were 6,346 households out of which 28.1% had children under the age of 18 living with them, 57.6% were married couples living together, 8.7% had a female householder with no husband present, and 30.6% were non-families. 25.7% of all households were made up of individuals and 13.5% had someone living alone who was 65 years of age or older. The average household size was 2.48 and the average family size was 3.01.

Auburn has two elementary school "districts." Homes north and west of Route 12 (Southbridge Street) feed into Bryn Mawr School (grades K-2) and Julia Bancroft School (grades 3-5). The other half of town feeds into Mary D. Stone School (grades K-2) and Pakachoag School (grades 3-5). All Auburn public school students attend Auburn Middle School (grades 6-8). Some students attend Auburn High School (grades 9-12), while others are given the option to attend instead. A new high school opened on Drury Square in the center of town directly next to the old high school, equipped with a new turf football field, all-purpose field, baseball field, and a grass softball field, as well as new tennis courts, in 2006; a group called "Save the '35" protested demolition of the oldest (1935) wing of the former high school. The old high school has now been completely demolished, except the dome on top of the high school. Few of the bricks of the old building were sold within the town, and there are some located at the Auburn Historical Museum.

The town voted in 2008 not to build a new library