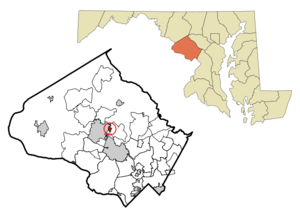 Washington Grove is a town in Montgomery County, , . The population was 515 at the 2000 census.

Washington Grove is known as the “Town Within a Forest.”

Almost entirely surrounded by new housing developments that have changed the area's character from rural farmland to the sprawling housing tracts and strip malls of a dormitory community, Washington Grove is an oasis of trees and walkways where people know their neighbors and value their way of life. 'Grovers' have a history of uniting to resist threats on the town’s character posed by the surrounding area’s rapid urbanization.

Washington Grove is listed on the both for its humanistic layout and for the way the town was founded. In the early 1870s, shortly after the B&O Railroad’s Metropolitan Branch was extended from Washington DC to Gaithersburg, Maryland, a group of Methodists purchased land nearby as a site for a camp meeting. In 1873 the first meeting was held in a rainstorm at the “Sacred Circle” in what is now the center of town. Tents were pitched to protect the camp meeting attendees. As more meetings ensued and their occupants began to stay for longer and longer periods, the tents were converted to cottages constructed to echo the traditional tent shape. Herein lies the origin of one of the Grove’s most distinctive features, the oddly-shaped, tightly-spaced homes radiating out from the Sacred Circle. While the smorgasbord of later additions on these houses gives the older part of town an eccentric and fanciful personality, each of these older houses has a small, tent-shaped core dating from the first cottage construction. They often had steeply peaked roofs with high windows and the rooms only had walls, no ceilings. Cooling breezes flowed through the houses and vacated any summer heat. This nature has been lost in many cottages that have been remodeled inside for year-round occupation and for an additional floor of rooms occupying the once lofty interior structures.

In 1937 the town was incorporated, and as it grew, the original layout of small houses fronting grassy walkways was preserved in the center of town, with vehicular access via paved streets leading to the backs of the houses. Houses built more recently do not front the walkways, but preserve a Grove flavor by the variety of architectural styles resulting from their being constructed one at a time in various styles rather than in tracts.

More than half of the town is publicly owned. The East Woods and West Woods, designated as wildlife sanctuaries, are the only municipality-owned forests in Maryland. The many walkways and parks are popular not only with residents but also with people from neighboring communities. On a fine evening, the walkways hum with people and cats strolling, walking dogs, and chatting. Grovers meet for musical picnics at the Gazebo, town meetings in McCathran Hall, and summer days swimming in Maple Lake, the Town's swimming hole in the West Woods. Other town activities include the Summer in the Parks program for children, a book club, a movie club, and the Mousetrap series of concerts.

Because most of the land was owned by the Town of Washington Grove, it had complete control over who purchased and leased the plots. In the early 20th century, the Washington Grove Camp Association and later the Town of Washington Grove placed restrictive covenants in deeds and leases in order to prevent African Americans from buying, renting, or leasing land in Washington Grove. [Edwards, Philip K. Washington Grove, . N.p.: Philip K. Edwards, 1988. ] This is exemplified in one of many deeds (particular one dating from 1925) that reads, “That whereas the death rate of persons of African descent is much greater than the death rate of persons of the white race and affects injuriously the health of the town and village communities, and as the permanent location of permanent location of persons of African descent in such places as owners or tenants constitutes and irreparable injury to the value and usefulness of real estate in the interest of public health and to prevent irreparable injury to the grantor or its successors and assigns, and the owners of adjacent real estate, the grantees, their heirs and assigns, hereby covenant, and agree with the grantor, its successors and assigns, that they will not sell, conveyor rent the premises hereby conveyed, the whole or any part thereof, or any structure thereon, to any person of African descent.” [Edwards, Suzanne H. . N.p.: n.p., 1974.]

There were 208 households out of which 33.7% had children under the age of 18 living with them, 62.5% were married couples living together, 4.3% had a female householder with no husband present, and 30.8% were non-families. 23.6% of all households were made up of individuals and 8.7% had someone living alone who was 65 years of age or older. The average household size was 2.44 and the average family size was 2.91.

Trash and recycled materials are picked up on Thursdays.

The town is zoned to schools in the district.