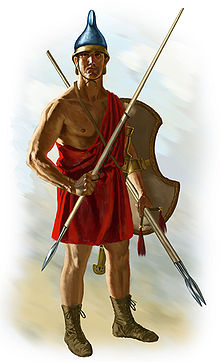 Darts are missile weapons, designed to fly such that a sharp, often weighted point will strike first. They can be distinguished from javelins by fletching (i.e., feathers on the tail) and a shaft that is shorter and/or more flexible, and from arrows by the fact that they are not of the right length to use with a normal bow.

The term has been used to describe an extremely wide variety of projectiles, from heavy spear-like ammunition for siege engines or atlatls to tiny poisoned needles for use in blowguns.

Some of the earliest evidence of advanced tool use includes remnants of an early type of dart, which can be considered the ancestor of arrows as well as bows (see Operation). Reconstructions of this system have a range of over one hundred meters (yards) and can penetrate several centimeters of oak. This technology was used worldwide from the Upper Palaeolithic (late Solutrean, c. 18,000-16,000 BC) until the development of archery made it obsolete (see Replacement).

The darts in question are much larger than arrows, but noticeably lighter than javelins. They have a weighted point, often of stone, on a removable foreshaft. This is held by friction onto a thin, flexible main shaft a few meters in length, with fletching and a (usually socket-like) nock at the opposite end. Since they are unlike anything in Western history, the term "dart" has been adopted after some debate. Some alternate terms for this missile have included the spear, but this term have fallen out of favor since in all other uses, spears are stiff enough to be used for stabbing. In its function, an atlatl dart is more like a combination between a bow and an arrow.

Its similarity to a bow may not be immediately obvious, but in fact both serve to accumulate energy by elasticity in a fundamentally similar way. As throwing begins, a dart of this type is designed to flex in compression between the accelerating force at its nock and the inertia of its weighted point, storing energy. Late in this throw, as the point moves faster and so offers less resistance, the dart releases most of this energy by springing away from the thrower. Some energy may also be recovered by the fletching as the projectile "fishtails" through the air. However, this energy is far less than is commonly stated and only effectively increases accuracy by counteracting the downward force on the tail.

To maximize elastic energy storage and recovery, such darts should be held only by the nock and allowed to pivot freely as they are thrown. This requires a special tool that is often called a "spear thrower". Western culture has been able to borrow a name for this tool from the Mexica, who used it against the invading Spanish, and who called it the atlatl.

Much is made of the leverage gained by using an atlatl, but in fact more leverage can be applied (to less effect, according to reconstructions) using a sling to launch a kestrosphendone.

Replacement by the arrow

In Europe, the atlatl was supplemented by the bow and arrow in the Epi-Paleolithic. By the Iron Age, the amentum, a strap attached to the shaft, was the standard European mechanism for throwing lighter javelins. The amentum gives not only range, but also spin to the projectile.[1]

Archery may be easier to learn and have a faster rate of fire, yet perhaps this system's greatest advantage over the atlatl is that ammunition is easier to make and transport. Since the dart must store almost all of the system's elastic energy, more care, planning, and weight of elastic material must be invested in its construction. In archery, the bulk of elastic energy is stored in the throwing device, rather than the projectile; arrow shafts can therefore be much smaller, and have looser tolerances for spring constant and weight distribution than atlatl darts. For example, stone dart points from the same set tend to vary in mass by no more than a few percent, and computer simulations show that this is necessary for efficient operation. Similar constraints exist for the length, diameter, and materials quality of the shaft. If the same amount of attention and material are instead invested into a bow, projectiles can be made lighter (by a factor of five or more) and to less exacting tolerances. This allowed for more forgiving flint knapping.

Greater mass becomes an advantage over archery when penetration is an overwhelming concern, as when harpooning sea mammals. This class of dart was used by aboriginal Arctic hunters such as the Aleut until fairly recently.

Darts and atlatls have been constructed by modern enthusiasts, either with ancient materials and methods or with high technology borrowed from modern archery. While some do this in the context of anthropology or mechanical engineering, many view the practice as a sport, and throw competitively for distance and/or for accuracy. Throws of almost 260 m (850 ft) have been recorded.[2]

The darts in use by the developers of the English language (see Thrown darts, below) were used throughout Europe for much of its military history, though they were never a dominant weapons technology. They have also lent their name to quite a few weapons from other cultures.

It is quite reasonable to speculate the darts used with atlatls were adapted from hand-thrown darts, which in turn were derived from light javelins. In Europe, short but heavy-pointed darts were sometimes used in warfare. These had a length of about 30 to 60 cm (0.98 to 2.0 ft) and resembled an arrow with a long head and short shaft.

The Roman model, the plumbata, was weighted with lead.[3] In some legions, five of these were carried inside each soldier's shield; reconstructions show a range of 70 m (77 yd) or more when thrown overhand in the fashion of a potato masher grenade.

The kestrosphendone, or kestros, was a sling-launched dart, invented in 168 BC for the Third Macedonian War, probably similar to hand-thrown darts of the period. Casting one (according to surviving records) requires a specially designed sling with two unequal loops, though it is not entirely clear whether this is a stave-sling or more closely resembles a shepherd's sling.

Some of the many Chinese and Greek siege engines and their descendants can be classified as "dart launchers". These include the ballista and the scorpio.

The blowgun can be used to fire darts, as well. Often, these are quite small, and do little harm by themselves; instead, they are effective due to poison spread onto their points, from (for example) dart frogs or curare.

This is a pointed weight attached at its blunt end to a length of rope or chain, which can be used to throw and retrieve it. It meets the definition above because it flies freely when no tension is applied to the rope, has a point and — in the form of a square of cloth — even has fletching. Shengbiao is a discipline of Wushu devoted to its use.

A Swiss arrow (also known as a Yorkshire arrow) is a dart thrown using a cord to make the dart go further with the same power.

Of the darts still in widespread use, perhaps the closest to traditional thrown darts are lawn darts. These are large and heavy enough to be thrown by swinging, and to seriously wound a person when thrown.

An indoor game of darts has also been developed, steel-tip darts generally weigh 18−26 grams and maximum of 50 grams is allowed in Amateur or Professional competitions such as the World Series of Darts. The common length of a dart is generally 15 to 20 cm (6 to 8 in) long, but rules allow for up to 30 cm (12 in). They are designed to penetrate dart boards made of bundled fibers (usually sisal).

Tranquilizer darts are related to the darts for blowguns, but include a hypodermic needle and a hollow reservoir resembling a syringe, which is generally filled with sedatives or other drugs. These are launched from a special gun using compressed gas, a tuft of fibers at the back of the missile serving as both fletching and wadding.

A type of dart still finds use in military engagements, in the form of flechettes. These are all-metal projectiles, often resembling nails that have had fletching (rather than nail heads) forged into them. They were used by American forces during the wars in Korea and Vietnam, but treaties have since been enacted to limit their use.

Large flechettes are used as kinetic energy penetrators in many gun-fired anti-armour projectiles.

Darts play an important role in ancient symbolism and mythology:

Numerous species of air-breathing land snails create darts which are fired as a contact shot during courtship; these are known as love darts.