HSA created both the United States Department of Homeland Security and the new cabinet-level position of Secretary of Homeland Security. It is the largest federal government reorganization since the Department of Defense was created via the National Security Act of 1947 (as amended in 1949). It also includes many of the organizations under which the powers of the USA PATRIOT Act are exercised.

The new department assumed a large number of services, offices and other organizations previously conducted in other departments, such as the Customs Service, Coast Guard, and U.S. Secret Service. It superseded, but did not replace, the Office of Homeland Security, which retained an advisory role. The Homeland Security Appropriations Act of 2004 provided the new department its first funding. A major reason for the implementation of HSA is to ensure that the border function remains strong within the new Department.[7]

The Act is similar to the Intelligence Reform and Terrorism Prevention Act (IRTPA) in reorganizing and centralizing Federal security functions to meet post–Cold War threats and challenges.[2] Like IRTPA, there are some inherent contradictions in the bill not solved by reorganization. These reflect compromises with other committees needed to secure passage, but the result is at times inconsistent or conflicting authorities. For example, the Act identifies the Department of Homeland Security's (DHS) first responsibility as preventing terrorist attacks in the United States; but, the law's language makes clear that investigation and prosecution of terrorism remains with the FBI and assigns DHS only an analytical and advisory role in intelligence activities.[1] Similarly, with Critical Infrastructure Protection (CIP), which relates to the preparedness and response to serious incidents, the Act gave DHS broad responsibility to minimize damage but only limited authority to share information and to coordinate the development of private sector best practices.

The Homeland Security Act of 2002 is the foundation for many other establishments, including:[2]

The Homeland Security Act of 2002 documented under Public Law is divided into 17 titles that establishes the Department of Homeland Security and other purposes. Each title is broken down into several sections, summarized below.[1][2][8]

Title I consists of three sections that establish the Department of Homeland Security, which carries out several missions that comply with the United States Code.

Title II consists of nineteen sections. It is headed by the Under Secretary and used to access, receive and analyze law enforcement information, intelligence information, and other information from federal, state, and local government agencies for further use towards the prevention of terrorist acts.

3. Science And Technology In Support of Homeland Security

Title III consists of thirteen sections. It is described as a plan to develop national policy and strategic plans to develop countermeasures for chemical, biological, radiological, nuclear and other emerging terrorist threats. It also establishes, conducts, and administers primary research and development.

4. Directorate Of Border And Transportation Security

Title IV consists of forty-eight sections and regulates what comes in out of United States territory in an effort to prevent terrorists and instruments of terrorism. This is done generally by securing the borders, territorial waters, ports, terminals, waterways, and air, land, and sea transportation systems of the United States, including managing and coordinating governmental activities at ports of entry.

Title V consists of nine sections and it helps to ensure the response time and preparedness of providers for terrorist attacks, major disasters and other emergencies. In addition, it establishes standards, joint exercises and trainings and providing funds to the United States Department of Energy and the Environmental Protection Agency.

6. Treatment of Charitable Trusts For Members Of The Armed Forces Of The United States And Other Governmental Organizations

Title VI consists of one section which, through several requirements, designates the late CIA officer Johnny Michael Spann as a trust fund for distribution towards surviving spouses, children, or dependent parents, grandparents, or siblings of Government related service members.

Title VII consists of six sections which is headed by the Under Security to manage the budget, appropriations, expenditures of funds, accounting, and finance, human resources, information technology, and procurement of the Departments.

Title VIII consists of fifty-three sections that establishes an Office for State and Local Governments to oversee and coordinate Departmental programs for and relationships with State and local governments.

Title IX consists of six sections which establishes a "Homeland Security Council" within the Executive Office of the President. This Council functions as an advisor to the President.

Title X consists of seven sections regarding the establishment of several divisions of Information Security. This title and its subchapter provides tactics and mechanisms for protecting federal information and preserve information security. In addition, it also establishes set standards, responsibilities, authorities and functions, the various definitions in information security, and an annual independent evaluation.

Title XI consists of sixteen sections which details the powers and duties of the Secretary, the Under Secretary, and the Attorney General.

Title XII consists of four sections which details air carrier liability for Third Party claims arising out of acts of terrorism, extension of insurance policies, correction of reference, and reports.

Title XIII consists of thirteen sections which in several chapters details and establishes Chief Human Capital Officers and it's council.

Title XIV consists of seven sections which contains the establishment of a program to deputize volunteer pilots of air carriers providing passenger air transportation or intrastate passenger air transportation as Federal law enforcement officers to defend the flight decks of aircraft of such air carriers against acts of criminal violence or air piracy.

Title XV consists of ten sections establishing the 12-month period beginning on the effective date of this Act. It consists of the definitions, reorganization plan, plan elements, and modification of plans. 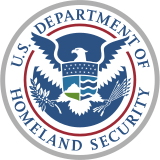 Seal of the United States Department of Homeland Security Seal.

The Homeland Security Act contains several provisions that identify specific duties for the EP&R Directorate.[9] Title V and Title II outline the way the department ensures the following: that the use of intelligence and its own threat analysis of terrorist capabilities are intended to distribute funds to those areas where the terrorist threat is greatest; and that states provide the Federal Government with their Emergency Response Plans so that the department can coordinate priorities regionally and nationally.[9][10]

Establishments Under the Homeland Security Department

The Homeland Security Act has been criticized[by whom?] for forbidding the Citizen Corps program called Operation TIPS (Terrorism Information and Prevention System). This criticism is regarded to be from the fear that the rejection of TIPS may contain setbacks to civil liberties protections such as the right to privacy and obstructing public access to information.[11]