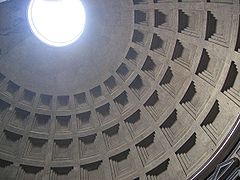 Coffering on the ceiling of the Pantheon, Rome

A coffer (or coffering) in architecture, is a sunken panel in the shape of a square, rectangle, or octagon in a ceiling, soffit or vault.[1] A series of these sunken panels were used as decoration for a ceiling or a vault, also called caissons ('boxes"), or lacunaria ("spaces, openings"),[2] so that a coffered ceiling can be called a lacunar ceiling: the strength of the structure is in the framework of the coffers. The stone coffers of the ancient Greeks[3] and Romans[4] are the earliest surviving examples, but a seventh-century BC Etruscan chamber tomb in the necropolis of San Giuliano, which is cut in soft tufa-like stone reproduces a ceiling with beams and cross-beams lying on them, with flat panels fillings the lacunae.[5] Wooden coffers were first made by crossing the wooden beams of a ceiling in the Loire Valley châteaux of the early Renaissance.[6]

Experimentation with the possible shapes of coffering, which solve problems of mathematical tiling, or tessellation, were a feature of Islamic as well as Renaissance architecture. The more complicated problems of diminishing the scale of the individual coffers were presented by the requirements of curved surfaces of vaults and domes.

A prominent example of Roman coffering, employed to lighten the weight of the dome, can be found in the ceiling of the rotunda dome in the Pantheon, Rome.