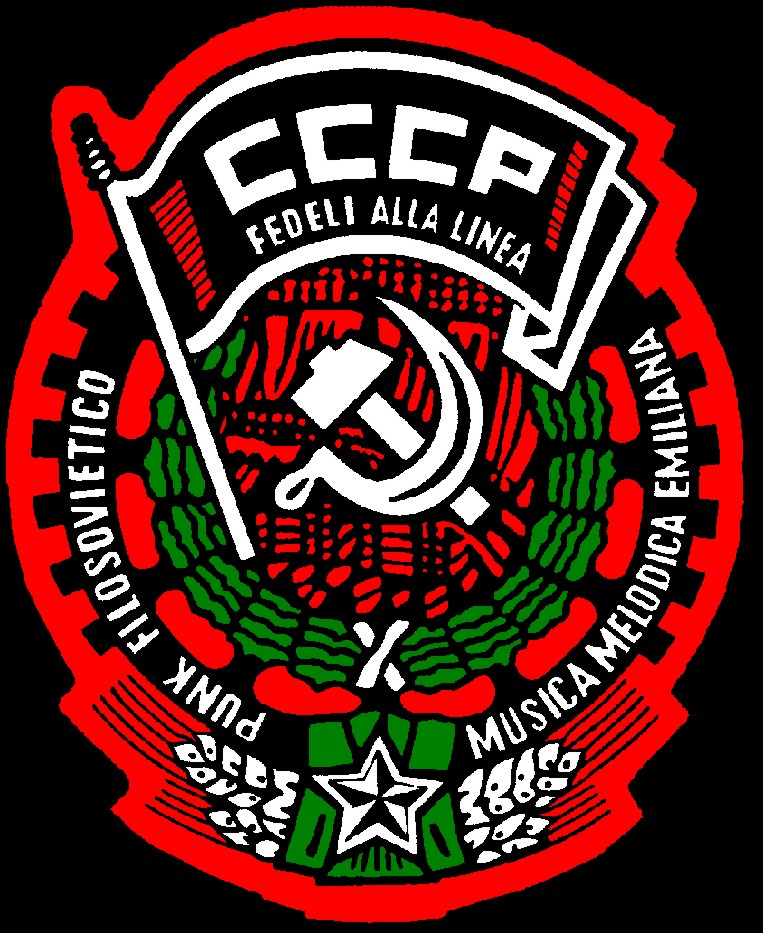 
CCCP Fedeli alla Linea were an Italian band formed in in by vocalist and guitarist . The band's style was self-defined by the members themselves as “Musica Melodica Emiliana - Punk Filosovietico” (“Melodic Music of - pro- punk”)

CCCP left behind the stereotypes of , and reached for a genre-defying convergence of rock, , Folk, , , and even while delivering through their lyrics a bleak vision of humankind, also introducing elements of and existentialist philosophy in their live shows.

CCCP's works influenced dozen of artists such as , , and . fact|date=August 2007

CCCP was formed in when Ferretti met Zamboni (both were from ) in a discoteque of (). Once they returned home they founded a new band called Mitropank. During the next summer Ferretti, Zamboni and bassist Umberto Negri returned to : it was during that trip that CCCP Fedeli alla Linea were born. The band members decided to use a instead of an actual drummer.

The name of the band celebrates the popular sub-culture of Emilia while also praising the , creating a link between and the typical province of .

During this period the band performed several times in , playing some underground clubs in such as the Kob or the Spectrumin. Their permanence in influenced the sound of the band through the local industrial scene. 's culture and the community of the West side of the town also influenced Ferretti's lyrics.

The band's first concerts in Italy were met with a negative response from the crowd, leading the band to add two new members to the line-up: "Benemerita "

In the band released "Ortodossia", their first on the independent label Attack Punk Records. In the same year the"" was released, which included the same three songs already included in their first ("Live in Pankow", "Spara Jurij", and "Punk Islam") plus an additional fourth track ("Mi ami?"). saw the release of their third , "".

The three s were produced and recorded by the band with very few money and musical instruments in a single room improvised as a recording studio, which was situated near a city tram line which constantly disturbed the regustration.

Their first studio , "", was recorded during and published by in . It reduced the visceral impact of hardcore while focusing on the eerie contrast between a harsh but spare instrumental background and Ferretti's delirious cut-up lyrics and -ian delivery. An eclectic stylistic range (from existential psychodrama to Dance groove, from to ) helped craft an oppressing atmosphere of angst and boredom, particularly in the centerpiece, "".

This album is considered by many music critics one of the masterpieces of contemporary Italian music, and a milestone for the whole European punk movement. The album's sales induced Virgin Dischi, the Italian branch of Virgin to sign the band. Some of the band's fans saw this move as betrayal and nicknamed the band “"CCCP fedeli alla lira"” with "lira" (the old Italian before the introduction of ) instead of "linea" ().

During the band recorded and released their first single "" and their second album, "", which was realized with a relatively big budget if compared with the first album. It is a less cohesive work, that ran the gamut from to a rock version of the anthem, from to feedback workouts.

In the same year, CCCP released the single "", a cover version of a song by the singer and painter [Amanda Lear sung on both the two tracks of the single] .

The third album, "" (), signs their musical change to . Keyboard, instead of , became the most important instrument. Their sound is now influenced by and it's more soft than in the previous records. It replaces the original emphasis with mystical overtones, and their industrial hardcore with a far less revolutionary .

In 1989 CCCP, , and went on tour in the ( and ). In they played in a palace full of soldiers in uniform. The soldiers stood up when the band played at the end of the concert the "A Ja Ljublju SSSR".

During this year Giorgio Canali, Gianni Maroccolo, Francesco Magnelli, and Ringo De Palma (the last three leaved the because of some artistical difference of opinin with band's manager Alberto Pirelli) joined and transformed the group.

The group, now composed by eight members, recorded their fourth album "" in an abandoned 700' villa. This album signes another amazing musical evolution for the band. CCCP reached their zenith with this album, a -esque stylistic puzzle that also stands as a personal musical encyclopedia, with complex and unpredictable suites such as "MACISTE contro TUTTI". A gorgeous "swan song", and a transition to the new sonorities of the (C.S.I.), the new band born under the ashes of the CCCP.

The acronym used for the new band name, C.S.I., reminds to the new situation in the , with the (CIS) ( _ru. Содружество Независимых Государств (СНГ); transliterated "Sodruzhestvo Nyezavisimykh Gosudarstv"; _it. Comunità degli Stati Indipendenti (CSI)). With the creation of the CIS, the and at the same time the band ceased to exist.

CCCP were effectively disbanded on , in the same date of the , and the members went on to other projects.

When the collapsed, Ferretti and Zamboni decided to shuffle the line-up and adopt a less political stance. The renamed (C.S.I.) debuted with a set of songs from "Ko del Mondo" (, 1993). They rapidly evolved towards a form of chamber rock music (mostly drum-less with "Linea Gotica" (, 1996). Unfortunately, "Tabula Rasa Elettrificata" (, 1997) simply aped the fads of the moment.