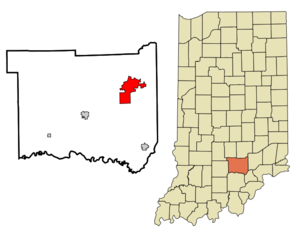 The North/South line, the , was built in the 1840s connecting Indianapolis to the Ohio River at Jeffersonville. It ran through the Shields farm at the area that is now Seymour.

In 1852 when the East/West railroad, the , was going to be built, Capt. who was the cousin of General talked the surveyor, John Seymour, into putting it through his land. In return he named the town Seymour. All trains had to stop at a crossroad, making Seymour a bustling community.

Seymour is the birthplace of singer and whose personal diary earned him a place in the . Robert William Shields was a distant cousin of Seymour founder .

There were 7,231 households out of which 32.6% had children under the age of 18 living with them, 49.4% were married couples living together, 11.5% had a female householder with no husband present, and 34.4% were non-families. 28.5% of all households were made up of individuals and 11.6% had someone living alone who was 65 years of age or older. The average household size was 2.46 and the average family size was 2.99.

* [http://ftp.rootsweb.com/pub/usgenweb/in/jackson/directories/business/1868/seymour318gms.txt 1868 Seymour Businesses and Owners per Chandler & Co.]
* (aka Blish Mill or Blish Flour) Involved in a 1916 decision setting a . Sales Manager and Secretary Elbridge Blish Thompson who was a and Alumni lost his life in the sinking of the .

Seymour was the site of the World's First Train Robbery, committed by the local , on October 6th, 1866 just east of town. Vigilantes from the town hunted down and eventually hung all but one of the Reno brothers in the gang.

The occurred in , in which members of the 477th Bombardment Group attempted to integrate an all-white officers' club at Freeman Army Air Corps Base. The mutiny later led to the integration of United States Military.

Nearby Points of Interest