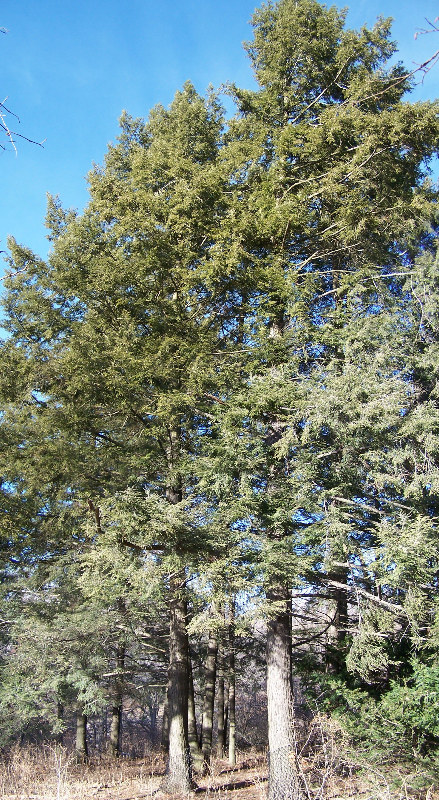 "Tsuga canadensis", also known as Eastern or Canadian Hemlock, and in the French-speaking regions of Canada as Pruche du Canada, is a coniferous native to eastern . It ranges from northeastern eastward through southern to , and south in the to northern Georgia and . Scattered outlier populations occur in several areas east and west of the Appalachians. It is the state tree of .

The eastern hemlock generally reaches heights of about 30 metres (100 feet),

"T. canadensis" occurs at sea level in the north of its distribution,

It is found primarily on rocky ridges, ravines and hillsides with relatively high levels of moisture.

Eastern hemlock is generally confined to areas with cool and humid climates. Precipitation in the areas where it grows is typically between 740 mm (29 inches) to more than 1270 mm (50 inches) per year. The lower number is more typical of northern forests that receive heavy snowfall, and the higher number is common in southerly areas with high summer rainfall. Near the Atlantic coast and in the southern Appalachians where the trees often reach their greatest heights, annual rainfall often exceeds 1520 mm (60 inches). In the north of its range the temperatures in January average -12°C, while in July they average only 16°C. In these areas less than 80 are without frost. In contrast to this, the southern end of the range experiences up to 200 days without frost and January temperatures as high as 6°C.

The eastern hemlock grows well in shade and is very long lived with the oldest recorded specimen being at least 554 years old.

Hemlock was very abundant in the northern-eastern USA and eastern Canada during the early Holocene, when it underwent a sudden decline in abundance, almost disappearing from the pollen record around 5,000 years ago. It later returned, but never became as abundant as it had been previously. The causes of this 'hemlock decline' are unknown, but it is likely to have been due to some form of pest or disease.

Due to it being a particularly long lived tree, several very large or otherwise impressive trees exist up and down the east coast of North America. One organisation, the (ENTS), has been particularly active in discovering and measuring these trees. In the southern Appalachians many individuals reach to 45 m tall, and one tree has been measured in the Great Smoky Mountains National Park to 52.8 m tall, though this tree is now dead from hemlock woolly adelgid; the tallest now surviving, the "Noland Mountain tree", is 51.8 m tall.

Trunk volume is the third dimension to receive attention by ENTS. The largest Eastern Hemlock has been calculated to be 44.8 m³.

"Tsuga canadensis" has long been a popular tree in cultivation. The tree is equally tolerant of full shade and full sun, making it a versatile tree. In addition, its very fine textured foliage that droops to the ground, its pyrimidal growth habit and its ability to withstand hard pruning make it a desirable ornamental tree. In cultivation it prefers sites that are slightly acidic to neutral with nutrient-rich soil that is moist but well-drained. It is most often used as a specimen, for a screen, or in small group plantings, though it can also be trained as a dense formal hedge. It should not be used on roadsides where salt is used in winter, as its foliage is sensitive to salt spray. It is also poorly adapted as a windbreak tree, as wind exposure causes dieback in winter. It has several drawbacks, such as a fairly low tolerance of urban stress, intolerance for very wet or very dry soils, and it is susceptible to attack by the hemlock woolly adelgid, though this is treatable.

It was introduced to British gardens in 1736.

Over 300 s have been selected for use, many of them being dwarf forms and shrubs. A partial list of popular cultivars includes: