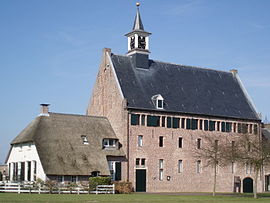 Devotio Moderna, or Modern Devotion, was a 14th century new religious movement, with Gerard Groote as a key founder.[1][2] Other well known members included Thomas à Kempis who was the likely author of the book The Imitation of Christ which proved to be highly influential for centuries.[1]

Groote's initial focus was the rediscovery of genuine pious practices and conversion and re-conversion of the lukewarm clergy, and he faced opposition from the clergy, as a result. But in time, after his death the opposition faded away.[3][2] Devotio Moderna flourished during the 14th and 15th centuries, but came to an end with the Protestant Reformation.[2]

However, the methods of "methodical prayer" taught by the Devotio Moderna and the techniques used for "self projection" into the imagery of a Biblical scene (to participate in the life of Jesus), significantly influenced the approaches to Christian meditation in the 16th century and thereafter. These methods persist in meditations such as the Spiritual Exercises which the Jesuits continue to practice.[4][5]

The origins of the movement go back to the Congregation of Windesheim, but the exact definiton of Devotio Moderna proved elusive for centuries, and to date its definition is subject to debate.[1] However, a key element that influenced the movement in its early days was the focus on the rediscovery of genuine pious practices and conversion and re-conversion of lukewarm clergy.[3] Geert Groote was highly dissatisfied with the state of the Church and what he perceived as the gradual loss of monastic traditions and the lack of moral values among the clergy - a sentiment expressed by Henry Suso long before him.[6]

The beginning of the Book of the Hours of Geert Groote

Devotio Moderna began as a lay movement - Groote gathered a group of friends around him and acted as their spiritual director. Among these Florens Radewyns became a priest based on Groote's advice and after Groote's death directed the bretheren.[2] Groote's work formed two kinds of communities, the Brethren of the Common Life, consisting mainly of laymen, as well as monasteries in the area of Windesheim near Zwolle.

The spiritual life of the Devotio Moderna followers was marked by focus on inner devotions and frequent short periods of meditation, specially before each new activity.[2] The monastic communities of Devotio Moderna faced opposition from the clergy, who objected to Groote, but in time as Radewyns persisted, the opposition faded away.[2]

Devotio Moderna arose at the same time as Christian Humanism, a meshing of Renaissance Humanism and Christianity, and is related to German mysticism and other movements which promoted an intense personal relationship with God. By the late 15th century the advent of the printing press increased the reach of the movement; The Imitation of Christ was printed in several languages by the end of the century. Practitioners of the Devotio Moderna emphasized the inner life of the individual and promoted meditation according to certain strictures. With the ideals of Christian Humanism, Devotio Moderna recommended a more individual attitude towards belief and religion and was especially prominent in cities in the Low Countries during the 14th and 15th centuries. It is regarded sometimes as a contributing factor for Lutheranism and Calvinism. It was also a major influence upon Erasmus, who was brought up in this tradition. 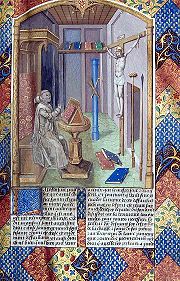 The writings of the Devotio Moderna followers such as Gerard of Zutphen and Jan Mombaer, as well as Groote introduced the tradition of "methodical prayer" which arranged exercises day by day and week by week.[7] Groote's On four Kinds of Matter for Meditation included mental imagery, as well as methodical approaches as an element of meditation.[8]

Centuries earlier, Hugh of Saint Victor and Guigo II had produced structured methods for Christian meditation, but their approaches were less systematic.[9][10] The methodical approach of Devotio Moderns towards prayer and meditation found significant following within the Catholic Church, as well as later Reformed communities.[7] The manuals for methodical prayer and meditation by Florens Radewyns and Zutphen had significant influence within Europe for over a century.[11]

The concept of immersing and projecting oneself into a Biblical scene about the life of Jesus was developed by Ludolph of Saxony in his Vita Christi in 1374 and became popular among the Devotio Moderna community.[5] The methods of methodical prayer as taught by the Devotio Moderna entered Spain and were known in the early 16th century, and influenced the approaches to Christian meditation.[4] Ignatius of Loyola used both of these techniques in his Spiritual exercises: a methodical format, as well as self-projection into a Biblical scene, e.g. starting a conversation with Christ in Calvary.[5]

The The Imitation of Christ (c. 1418), often attributed to Thomas a Kempis (d. 1471), a Brother of the Common Life, outlines the concepts of Modern Devotion, based on personal connection to God and the active showing of love towards Him (e.g., in the Blessed Sacrament of the altar or during mass). It influenced a number of Saints such as Thérèse of Lisieux.