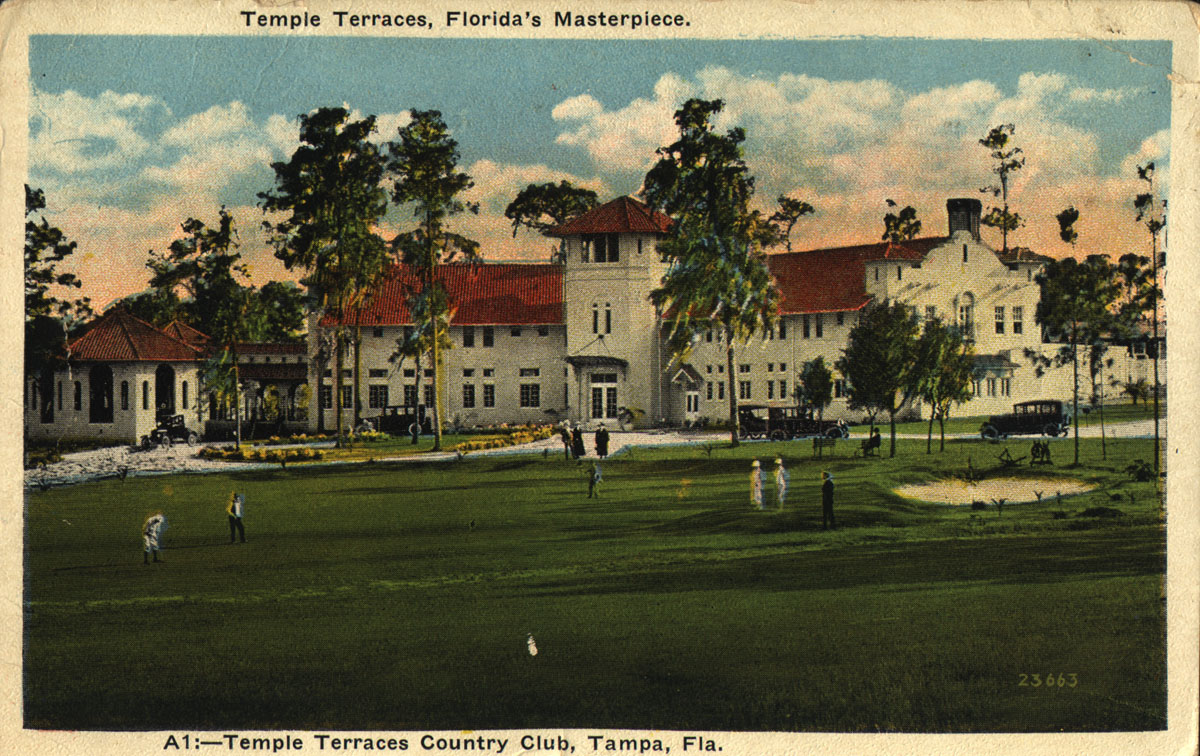 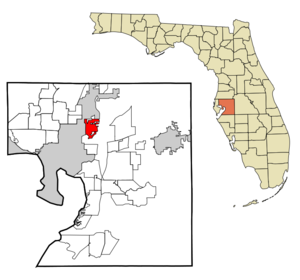 Temple Terrace is a city in north-central . According to the city's 2006 estimates, the city had a population of 23,405. It is the third and smallest incorporated municipality in Hillsborough County, incorporated in 1925. The community is known for its rolling landscape, scenic , and majestic trees; it has the most grand live oak trees of any community in central Florida. Temple Terrace was originally planned as a 1920s Mediterranean Revival golf course community.

Exploration of the Temple Terrace area dates back to 1757 when Spanish explorer Don Francisco Maria Celi of the Spanish Royal Fleet made his way up the Hillsborough River to what is now Riverhills Park in search of pine trees to use as masts for his ships. Here, in the extensive forest, he erected a cross in what he named "El Pinal de la Cruz de Santa Teresa." Confirmation of the fleet's travels is found in its map and log book. An historic marker and a replica of the cross erected to honor St. Theresa is found in the Park today. In the late 1800s/early 1900s, the many pine trees made the area popular for turpentine manufacturing and logging.

The area now known as Temple Terrace was originally part of the exclusive convert|19000|acre|km2|sing=on hunting preserve of Chicago socialite (Mrs. ) which was called "Riverhills Ranch" (Mrs. Potter Palmer played an extensive role in making the City of the Arts it is today). One of the original buildings from the preserve remains and is today called The Woodmont Clubhouse. Mrs. Potter-Palmer’s vision for her property was that it be developed into a golf course community surrounded by extensive citrus groves but her death in 1918 prevented her from realizing that vision. At her death, trustee of her estate and brother Adrian Honore’ sold her local land holdings to Burks Hamner, Vance Helm, Maud and Cody Fowler, and D.Collins Gillett (Adrian Honore' retained a seat on the Board) who formed two development corporations—Temple Terrace Estates, Inc., who developed the golf course and residential areas; and Temple Terraces, Inc., who developed convert|5000|acre|km2 of orange groves that originally surrounded the City to the west and north, the largest orange grove in the world in the 1920s. D. Collins Gillett oversaw Temple Terraces, Inc. and owned the first and largest citrus nursery in Florida, Buckeye Nurseries, Tampa, his father Myron E. Gillett was instrumental in bringing the Temple orange into the US from Jamaica. In 1924 part of the convert|5000|acre|km2|sing=on area platted as Temple Terraces, Inc. was developed into the present day neighborhood of , immediately adjacent to Temple Terrace to the west, hugging the Hillsborough River. Nearby was also originally part of Mrs. Palmer's original convert|19000|acre|km2|sing=on ranch. ). 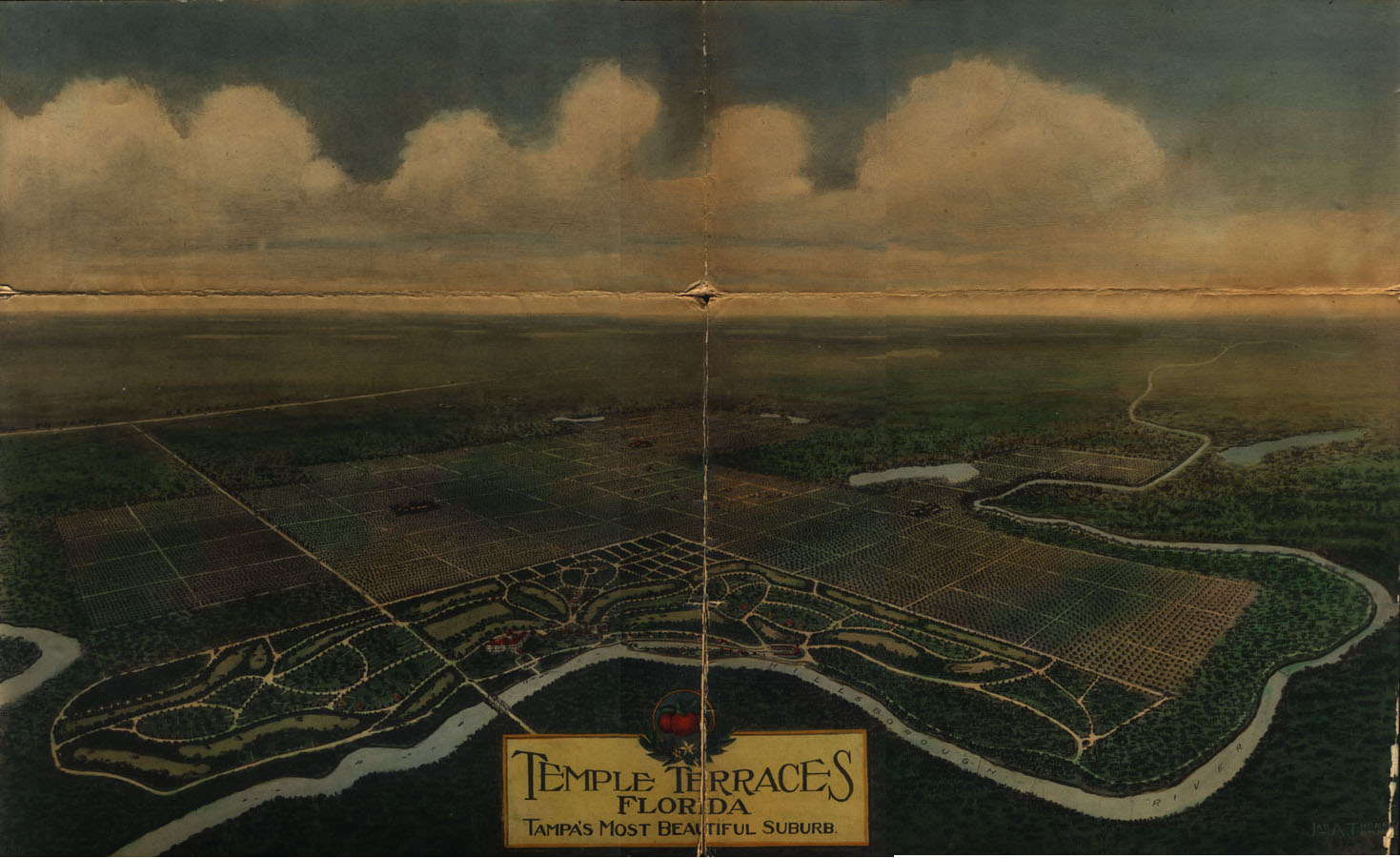 250px|left|thumb|The Vision: 1922 Temple Terrace Master Plan (looking Northwest) Recently discovered colorized photograph showing the “world’s largest citrus grove in the 1920s” (5000 acres of Temple oranges) to the west and north surrounding the Mediterranean Revival golf course community, one of the first planned golf course community’s in the United States. The Hillsborough River is in the foreground, Bullard Parkway shows the bridge crossing the river, 56th Street does not exist, and Nebraska Avenue is on the left horizon.There are twelve buildings designed by Elliott remaining in the city, the largest collection of his work anywhere. In addition, there are at least thirty buildings in the city designed by architect Dwight James Baum, which is thought to be the largest collection of his work in the Southeast.

Temple Terrace struggled through the 1930s like the rest of Florida. Building activity began to pick up again post World War II. There is now a fine collection of homes and buildings, at least three of which were designed by members of the renowned . Two houses located on South Riverhills Drive were designed in the 1950s by architect John Randal MacDonald AIA, a student of architect .

Florida Bible Institute, now , a four year liberal arts college, bought the old Country Club Clubhouse and Club Morocco Casino in the late 1930s from the city for back taxes and both buildings remain a cherished part of the college. Florida College is now a private liberal arts college (founded in 1946) and occupies some of the community's oldest buildings. attended Florida Bible Institute, which owned the property now occupied by Florida College, in the late 1930s. In his autobiography he writes he received his calling "on the 18th green of the Temple Terrace Golf and Country Club". A Billy Graham Memorial Park is on the east side of the 18th green on the river. Lee Warren Boswell taught at Florida College; he sold his Monarch Markets to in the 1930s who then founded Supermarkets.

Temple Terrace is currently in the process redeveloping fifty acres (southeast quadrant) of it’s 1960s era downtown. The cities goal is to build a mixed-use, medium density, pedestrian-oriented downtown that reflects the cities history and character. A master plan for the downtown area was created in 2004 when the city hired notable town planner Torti Gallas to create a master plan and redevelopment code for the entire convert|225|acre|km2|sing=on downtown area (four quadrants of 56th Street and Busch Boulevard), all with citizen input. The city has also initiated a for its downtown, created a façade improvement grant program, implemented a multi-modal transportation model to encourage alternatives to the automobile, and is in the process of revitalizing 56th Street with landscaping, street furniture, lighting, and placing overhead utilities underground.

Many of Temple Terrace's residents teach or work at the nearby and the close-knit community has strong ties to that institution (the USF campus was also originally part of Mrs. Palmer's original convert|16000|acre|km2|sing=on ranch).

Eureka Springs Park is located to the east of Temple Terrace, it is Hillsborough County's only botanical garden. The 31 acre park was started by Russian imigrant and amateur horticulturalist Albert Greenberg who donated his park to the county in 1967. Poet and other famous personalities made it a point to visit Greenberg in the years pre-WW2.

There were 8,671 households out of which 27.9% had children under the age of 18 living with them, 46.9% were married couples living together, 11.4% had a female householder with no husband present, and 38.3% were non-families. 28.9% of all households were made up of individuals and 8.3% had someone living alone who was 65 years of age or older. The average household size was 2.36 and the average family size was 2.95.