Danny Brough plays for the Huddersfield Giants in Super League. He has also played for the Scotland.[2] He is also the current coach of the Huddersfield amateur team Emley Moor ARLFC who compete in the Pennine League

Brough's usual position is half-back, stand-off, and in some cases hooker. 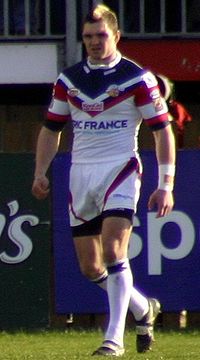 Danny Brough in action for Wakefield

Danny Brough has a wealth of experience at a number of clubs, he started his playing career in Wakefield's academy set up, subsequently signing for Dewsbury Rams, Castleford Tigers, York City Knights and Hull before playing for Wakefield Trinity Wildcats before joining current club Huddersfield Giants.

Brough starred with four goals and a drop-goal in Hull's 2005 Challenge Cup win over Leeds Rhinos, with many claiming he was unlucky not to win the Lance Todd Trophy.

Brough also helped Castleford Tigers gain promotion back into SL in 2007, having lowered his wages to play in the NL1 competition. He subsequently won the man of the match award in the Grand Final - but chose to leave the club to join the Wakefield Trinity Wildcats and will play against the Tigers in 2008.The first meeting for wildcats vs Tigers were in March were Brough scored his first try of the season. He continued to haunt his old club this time at The Jungle when he scored his second try of the season . He also scored nine goals against them at Millennium stadium.

Brough went on to win the Albert Goldthorpe Medal for his consistent ability to perform throughout the 2008 season. Known for his attacking strive, Danny Brough also topped the number of attacking kicks from any other Super League player in 2008.