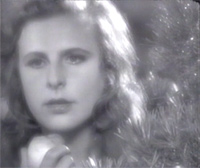 "The Blue Light" ( _de. Das Blaue Licht) is a 1932 film written and directed by and , with uncredited scripting by . The film is very loosely based on an old German legend about a witch, later adapted by the in their tale "". In this version, the witch, Junta, played by Riefenstahl, is intended to be a . Filming took place in the , in , , and , .

A young woman, Junta (played by Leni Riefenstahl), lives apart from her village, and for her solitude and strangeness, is considered to be a ; when she comes to the village for one reason or another, the townsfolk chase her away. They feel that she may in some way be responsible for the deaths of several young men of the village, who have felt compelled, one by one, to climb the local mountain (and fall to their deaths) on full moon nights.

Junta lives mostly apart from society and stays by herself (with a young shepherd boy) in the tranquility of the mountains surrounding the village. She plays in the hills and woodlands, more or less a free spirit. She is simple and innocent, but also seems something of a mystic. She loves to climb and clamber over the steep, difficult faces of local mountains.

On full moon nights, a crack in a prominent local mountain admits the moon's light and illuminates a filled with beautiful . This place of indescribable beauty, glowing with magical blue light, is a sacred space for Junta. The glowing blue light, shining from afar, to the village below, is also what has attracted the village's young men, none of whom were ever able to reach it before falling off the mountain's treacherous slope.

A man from the city, a painter, traveling through the village, falls in love with Junta. He follows her to the cabin she shares with the shepherd boy, and decides to stay for a while. The man speaks only German, and Junta only Italian, so their communication is fragmentary. All is pleasant and good, and very chaste, until the next full moon night, when the man sees Junta climbing up the mountain. He follows her, actually reaching the beautiful grotto, and finds Junta in a state of ecstasy among the crystals. Perceiving these thousands of crystals to be a source of immense wealth for Junta and the villagers, the man immediate runs down to inform the townsfolk, and tells them of the correct route to reach the grotto. Junta does not realize that he is doing this, until the next day, when she finds some of her crystals on the path to the village, as well as some dropped tools. Rushing up to the grotto, she finds it completely barren of crystals, raped by the greedy villagers. Meanwhile, the villagers and the painter are living it up and celebrating. Junta is totally devastated at this rape of the sacred grotto, and falls to her death.

A similarly named legend in Germany ("Das Blaue Licht") may have lent some inspiration to Riefenstahl's screenplay. In a period of time when a pan-Germanic was sweeping the country, audiences were highly likely to have been familiar with the old legend, and accordingly expected the film to follow it closely. However, the film shares very little with the legend, and even departs from it in an unexpected way, casting Leni Riefenstahl as the beautiful loner, not at all a witch, but wrongly accused of being one.

The original legend, compiled by the in 1810, and later popularized by the pre-Hitler nationalists of the 1920s, tells the story of a crippled soldier who is terminated from the service of his king. Released from service, he travels into the woods to seek a cure, and comes upon a witch's house. It is there that he asks her if she is willing to help him. She agrees to cure him but he must first do three things for her. (The third task being nothing less than to descend into a very deep and dry well, and bring back from its depths a magic lamp.) In that legend, however, the soldier finds a dwarflike creature at the bottom of the well. Apart from the strange lamp he comes upon, and which glows in a mysteriously blue light (and which ultimately leads to the witch's ruin), there is very little else to connect Riefenstahl's concept to the German myth that came before her.

Gustav Renker's novel "Bergkristall" (1930) has many similarities to the plot of "Das Blaue Licht" and may have been used by Balázs and Riefenstahl without attribution.