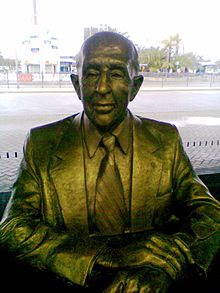 Bust of Brearley at Perth Airport by sculptor Gerard Darwin

Sir Norman Brearley CBE was a commercial and military pilot and one of the pioneers of the airline industry within Australia.

In April, 1915, after undertaking a 5-year apprenticeship as a mechanic, he worked his way to the United Kingdom and subsequently enlisted in the Royal Flying Corps.[2] Whilst flying in France during World War I he was badly wounded in October, 1916, and returned to Western Australia to recover.[2]

In 1921, Brearley founded West Australian Airways Ltd.[1] In the same year, Brearley was issued with the first civil pilot's licence under the 1921 Air Navigation Regulations.[1] Despite his holding licence No. 2, licence No. 1 was not issued until the 1930s in honour of Amy Johnson's record flight from London to Australia.[1]

In 1927, Brearley opened the Perth Flying School at Maylands. He retired from commercial aviation in 1936 when he merged his airline with Australian National Airways.[2]

He later served with the Royal Australian Air Force during World War II.[1]