The Adventure of Wisteria Lodge

The Adventure of Wisteria Lodge

"The Adventure of Wisteria Lodge" is one of the fifty-six Sherlock Holmes short stories written by British author Arthur Conan Doyle. One of eight stories in the cycle collected as His Last Bow, it is a lengthy, two-part story consisting of "The Singular Experience of Mr. John Scott Eccles" and "The Tiger of San Pedro", which on original publication in The Strand bore the collective title of "A Reminiscence of Mr. Sherlock Holmes". 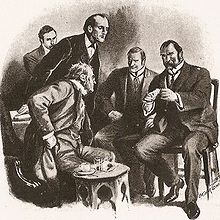 Holmes is visited by a perturbed proper English gentleman, John Scott Eccles, who wishes to discuss something “grotesque”. No sooner has he arrived at 221B Baker Street than Inspector Gregson also shows up, along with Inspector Baynes of the Surrey Constabulary. They wish a statement from Eccles about the murder near Esher last night. A note in the dead man’s pocket indicates that Eccles said that he would be at the victim’s house that night.

Eccles is shocked to hear of Aloysius Garcia’s beating death. Yes, he spent the night at Wisteria Lodge, Garcia’s rented house, but when he woke up in the morning, he found that Garcia and his servants had all disappeared. He was alone in an empty house. He last remembers seeing Garcia at about one o’clock in the morning when he came to Eccles’s room to ask if he had rung.

Eccles met Garcia, a Spaniard, through an acquaintance, and seemed to form an unlikely friendship right away. Garcia invited Eccles to stay at his house for a few days, but when Eccles got there, he could tell that something was amiss. Garcia seemed distracted by something, and the whole mood of the visit seemed quite sombre. Indeed, Garcia’s mood became even darker once his servant handed him a note that evening.

Eccles left Wisteria Lodge and inquired about the place at the estate agent’s, and was surprised to find that the rent on the house had been paid in full. Odder still, no-one at the Spanish Embassy in London had heard of Garcia.

Inspector Baynes produces the note that Eccles saw Garcia receive. It reads “Our own colours, green and white. Green open, white shut. Main stair, first corridor, seventh right, green baize. Godspeed. D.”, in a woman’s handwriting. Could it have been a tryst? Could a jealous husband be behind Garcia’s death?

It emerges that Baynes has deduced that Garcia’s body had been lying out in the open since one o’clock, but Eccles says that this is impossible, as Garcia came to his room about then. Holmes theorizes that Garcia may have tampered with the clocks to get Eccles to bed earlier than he thought it was, and that the whole business of coming to his room and making a point of mentioning that it was one o’clock — when it was probably much earlier — was likely aimed at setting up an alibi, but for what?

All that Holmes can deduce is that the murderer lives near Wisteria Lodge, and in a big house.

The Tiger of San Pedro 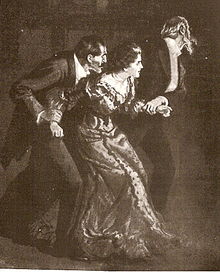 Holmes and Dr. Watson go to Esher to see Wisteria Lodge with Inspector Baynes. The constable guarding the house reports a hair-raising experience. A brutish-looking man — the devil himself, thought the constable — looked in the window. The constable gave chase, but the intruder got away. Holmes establishes by the footmarks that the constable did not imagine this.

Inside the house, a number of odd items are to be seen. Something resembling a mummified baby, a bird torn to pieces, a pail of blood, and a platter full of charred bones. Holmes later links these to voodoo, providing an important clue.

Suddenly, however, five days after the murder, Holmes is astonished to read in the newspaper that Baynes has arrested someone, Garcia’s cook, the brutish fellow who had given the constable such a start. He provides little information, though — only grunts. Holmes is sure that the cook is not the murderer, and warns Baynes. Baynes, however, declines Holmes's assistance and advice.

Holmes spends the next while reconnoitring the local country houses, and finds one of interest, the Henderson household, whose master has obviously spent time in the tropics, and whose servant is a dark-skinned foreigner. Henderson’s two girls have an English governess named Burnet. Holmes also learns from a sacked gardener that Henderson is rich, and scared of something, although no-one can say what. Nor can anyone say where he came from. Henderson is also violent.

Holmes believes that the cryptic note came from this household, High Gable, and the writer could only be Miss Burnet, who has not been seen since the night of the murder. Holmes decides to go to High Gable, at night, to see whether he can “strike at the very heart of the mystery”. He does not get the chance.

Warner, the sacked gardener, comes in and announces that the Hendersons have fled by train, and tried to take Miss Burnet with them. He, however, wrestled her into a cab and brought her to the inn where Holmes and Watson are staying. She was obviously unwilling to go with Henderson for she had been drugged with opium.

“Henderson” has also been identified, by Inspector Baynes. He is Don Juan Murillo, the Tiger of San Pedro, a hated and feared overthrown dictator from Central America. Garcia, who was from San Pedro, not Spain, got himself killed in a revenge plot, it turns out. Miss Burnet was also part of the plot. Yes, she wrote the note, but Murillo’s secretary caught her doing it, Murillo confined her, and then awaited Garcia’s move, killing him. Miss Burnet’s real name is Mrs. Victor Durando. Her late husband was from San Pedro, its ambassador to Britain and a potential political rival to Murillo. Murillo had him recalled and shot so that he could not pose a threat to Murillo's position.

Murillo and his companions give the police the slip in London, and resurface in Madrid under new aliases. However, they are both murdered, apparently by Nihilists (but the reader knows better), and their killers are never caught.

Out of the entire collection of Holmes stories by Doyle, this is the only story in which a police inspector (specifically, Inspector Baynes) is as competent as Holmes. Holmes has nothing but praise for Inspector Baynes, believing that he will rise high in his profession, for he has instinct and intuition. Inspector Lestrade never received this kind of appreciation from Holmes.

San Pedro is a fictitious country. Its colours are green and white, explaining one part of the cryptic note.

The Adventure is said to take place in 1892, but this year was a part of "The Great Hiatus", and Holmes's reference to a colonel whom he has arrested makes it more likely that the year is 1894.

Works related to The Adventure of Wisteria Lodge at Wikisource