Danny Dietz Jr. was born on January 26, 1980 in Aurora, Colorado the son of Danny Phillip Sr and Cindy Dietz and brother to Tiffany Bitz and Eric Dietz. He was a 1999 graduate of Heritage High School (Littleton, Colorado). He earned his black belt in Taekwondo from the Korean Academy of Taekwondo. He enlisted in the Navy in 1999, earned his SEAL trident in 2001 and was subsequently assigned to SEAL Delivery Vehicle Team Two in Virginia Beach, VA. There he met and married his wife Maria L. Dietz in March 2003. In April 2005, Dietz deployed with his Special Reconnaissance element to Afghanistan to support Naval Special Warfare Squadron TEN and the prosecution of the Global War on Terrorism. The larger than lifesize bronze memorial was created by sculptor Robert Henderson of Canon City, Co. The South Wing of the Pacific Beacon Apartments at Naval Station San Diego is named Dietz Hall as well.

Dietz was part of an elite team of four SEALs on a reconnaissance mission "tasked with finding a key Taliban leader in mountainous terrain near Asadabad, Afghanistan," according to a Navy news release.

On June 28, 2005, SEAL Team 10 was assigned to kill or capture a high ranking Taliban leader in the Hindu-Kush mountains. The SEAL team was made up of Michael P. Murphy, Marcus Luttrell, Danny Dietz and Matthew Axelson. Luttrell and Axelson were the team's snipers while Dietz and Murphy were the spotters.

"They were spotted by anti-coalition sympathizers, who immediately reported their position to Taliban fighters. A fierce gun-battle ensued between the four SEALs and a much larger enemy force with superior tactical position," the Navy release said. The SEALs radioed for help, and a responding Chinook helicopter was shot down by a rocket-propelled grenade, killing eight more SEALs and eight Army NightStalkers. It was the worst single combat loss for the SEALs in SEAL history. [1] 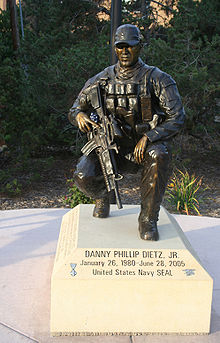 The statue of Danny Dietz in Berry Park in Littleton, Colorado

The location of Dietz' body was unknown for seven days. His remains were recovered during a combat search and rescue operation on July 4, 2005. Dietz was returned to the United States, where he was interred with full military honors. His hometown of Littleton, Colorado honored his memory by erecting a statue of Dietz in uniform holding his rifle, which was unveiled on July 4, 2007. This was not without controversy however. Local parents, suggesting that the statue of Dietz glorified violence, tried to have the statue altered. The statue, they argued, was three blocks from a school. The Littleton city council stated that 150 emails and letters were received in support of keeping the memoral as is, there was only one in favor of changing it. http://www.washingtontimes.com/news/2007/apr/6/20070406-115248-9955r/print/ After an even larger backlash against the parents group, the monument was erected with Dietz holding his service weapon as intended.[2]