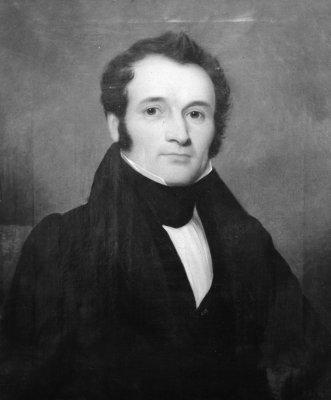 John Ruggles (, &ndash;, ) was an American politician from the of . He served in several important state legislative and judicial positions before serving in the U.S. Senate.

Ruggles was born in Westborough, . He attended public school there and in 1813 graduated from in Providence, . Ruggles studied law, and after being admitted to the bar in 1815 he began practicing in Skowhegan, . Two years later, Ruggles moved to Thomaston. In 1823, Ruggles was elected to the . He served in the House until 1831, and was speaker (1825&ndash;1829 and again in 1831). He resigned from the state house to replace (who had been elected governor) as a justice of the supreme judicial court of Maine, serving until 1834.

The state legislature elected Ruggles as a Democratic-Republican (Jacksonian) to the U.S. Senate to fill the vacancy caused by the resignation of . He was later elected for the full term beginning , , and in total served from , , to , . He was an unsuccessful candidate for reelection in 1840.

During his tenure in Congress, Ruggles had served as chairman of the Committee on Patents and Patent Office (25th Congress), and in 1836 framed the bill for the reorganization of the United States Patent Office. He was known for his interest in and s, and because of his legislative accomplishments in this area he has become known as the "Father of the U.S. Patent Office". Ruggles also was an inventor and the patent-holder of US patent|1, issued , . His invention was a type of train wheel designed to reduce the adverse effects of the weather on the track. Note that this was not the first patent ever from the USPTO; the previous patents were destroyed by fire and afterwards called the , and new patents afterwards were numbered from 1 again. Ruggles received the first patent granted under the new system; Samuel Hopkins received the first X-Patent.

In retirement, Ruggles resumed the practice of law in Thomaston. There he made several more inventions and was well-known as a political writer and orator. Ruggles was wealthy; he and his wife Margaret George Ruggles had children and lived in the largest house on the town's Main Street. He died in 1874 a few months before reaching age 85. He is interred in the Elm Grove Cemetery.