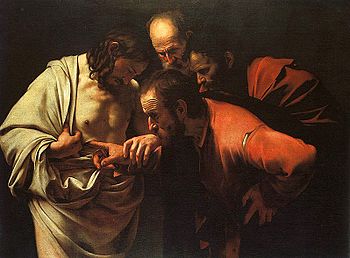 The Incredulity of Saint Thomas by Caravaggio

A Doubting Thomas is someone who will refuse to believe something without direct, physical, personal evidence; a skeptic.

The term is based on the Biblical account of Thomas the Apostle, a disciple of Jesus who doubted Jesus' resurrection and demanded to feel Jesus' wounds before being convinced (John 20:24-29). After seeing Jesus alive and being offered the opportunity to touch his wounds, according to the author of the Gospel of John, Thomas then professed his faith in Jesus. For this reason he is also called Thomas the Believer. The Biblical account then reports that Jesus said, "Blessed are they that have not seen, and yet have believed." This account of Thomas does not appear in the three synoptic Gospels.[1] 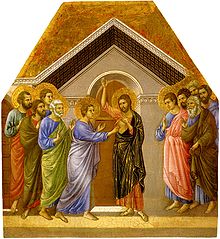 In art the subject is technically known as The Incredulity of Saint Thomas, and has been common since at least the 6th century, when it appears on the Monza ampullae.[citation needed] In those depictions, as later in the Baroque, the image was used to emphasize the importance of physical experiences, extended by theologians to pilgrimages, veneration of relics and ritual, in reinforcing Christian beliefs.[citation needed] The subject enjoyed a revival in popularity in Counter-Reformation art as an assertion of Catholic doctrine against Protestant rejection of these practices.[citation needed]