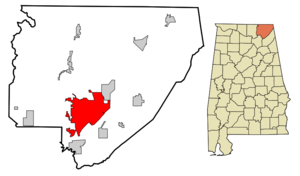 mapsize = 250px
map_caption = Location in Jackson County and the state of

Prior to Scottsboro's founding, the area encompassing the present-day city was inhabited by the Cherokee Indians. While the Tennessee valley did not have large Native American settlements at the time of the first white settlers, there was a Cherokee town named "Crow Town" near where Scottsboro is located today.

In the early 1700s, before the formation of the United States, the French established colonies centered around New Orleans and Mobile. The U.S. bought this land in the Louisiana Purchase of 1803.Verify source|date=June 2008

As settlers began pouring into the Tennessee region, they found the Tennessee River to be an excellent source of food, water, and a way of shipping goods to the big cities. John Hunt, in 1805, decided to migrate to the area and built a small log cabin in the woods near the river. More people began settling into the area and Mr. Hunt founded the future city of Huntsville in the 1820s.Verify source|date=June 2008

More settlers moved into the Mississippi Territory, resulting in the statehood of Mississippi, and the creation of the Alabama Territory in 1818. Delegates from Tennessee and the newly formed Madison County met in Sauta Cave and decided to admit a new county. On December 13, 1819, Jackson County was formed. Then, only one day later, the State of Alabama was admitted into the Union as the 22nd state on December 14, 1819.

The first county seat of Jackson County was at Sauta Cave, in the Northern part of the county, nowhere near the Tennessee River. Sauta didn’t survive after the courthouse was moved to Bellefonte in 1821.Since Bellefonte is closer to the Tennessee River than Sauta, and closer to the future site of Scottsboro, more settlers started moving to the area, since they wanted to be near the county seat. Scottsboro’s founder, Robert T. Scott, worked in the Jackson County legislature for a number of years. Since he and his wife, Elizabeth, wanted a place to call their own and were not very fond of Bellefonte, they moved to Scottsboro around 1850-53. The settlement of Sage Town was in 1854. In 1853, the newly formed Memphis & Charleston RR (a stretch of railroad that starts at Memphis, TN, and ends in Charleston, SC) decided to build a station at Scottsboro and did so in 1856. In the same year, passengers started disembarking at Scott’s Station. Bellefonte citizens rejected the railroad because they didn’t want train travel to interfere with the town’s thriving river trade. This decision ultimately damaged Bellefonte and its reputation as the county seat for nearly 40 years.In 1861/1863, the Bellefonte courthouse was set ablaze and charred.Organizing the new county seat, began in 1860, by having a contest to see what towns were suitable for the role as county seat.Many of the county’s towns pushed for the vote, but the top towns were Hollywood, Stevenson, Larkinsville, and Scotts-borough ( Scottsboro ). To narrow the nominees, the county council decided that:

* The town must be within 8 miles of the Memphis & Charleston Railroad line.

* The town must be near the center of said county.

This automatically eliminated 3 of the 4 towns, which made Scottsborough the last nominee for the role of the county seat.Constructing the courthouse began in 1868 and the jail the following year. County commissioners selected the spot for the courthouse, at its current location in the middle of the public square.

The 20th century was a big step in the development of Scottsboro. In 1902, two cases of smallpox were found but fortunately the disease didn't spread more widely. In 1903, the first car that came to the town drove through the square en route from Ohio to Florida. In 1906, local blacksmith H.C. Payne built Scottsboro’s first homemade automobile, which was made with a wooden frame, four sprocket wheels, and hand-powered cranks. In 1911, the courthouse was set ablaze and was rebuilt. In 1912, the courthouse was demolished and an election was held to determine whether the courthouse would be moved to Stevenson or stay in Scottsboro (Stevenson residents didn’t think Scottsboro deserved the role of county seat.) Scottsboro won the vote and the present courthouse was built (before the renovation and expansion in 1954.)

The case of the Scottsboro Boys arose in Scottsboro during the 1930s, when nine black youths, ranging in age from twelve to nineteen, were accused of raping two white women, Victoria Price and Ruby Bates, one of whom would later recant.

The four trials, during the course of which most of the youths were convicted and sentenced to death by all-white juries despite the weak and contradictory testimonies of the witnesses, are regarded as one of the worst travesties of justice perpetrated against blacks in the post-Reconstruction South.

For decades, rows of ferries had been transporting passengers and their Fords to and from Sand Mountain, but, in 1928-1931, the Kansas Bridge Company built the Bridge, a long steel bridge that now connects the county seat to , almost tripling the town’s population. In 1932, a couple were wed on top of the bridge. The newlywed wife commented “I wanted to be married where the light-blue water touches and meets with the light-blue sky…”

In the early 1950s, the town gained land for a water plant on Sand Mountain, and that’s why Scottsboro doesn’t have a water tower as do the surrounding towns. In 1954, the courthouse was starting to deteriorate, so it was renovated and all the wooden walls were replaced with marble. Because of the growth in population and demand, more rooms were added to expand offices for services such as automobile tags and land records.

In the 1980s, a second bridge was built to increase travel and reduce traffic on the B.B. Comer (original bridge). In 1927, famous aviator Charles Lindbergh performed stunts in his famous plane the Spirit of St. Louis. In the Depression Era of the 1930s, the town officially became a city due to an increase in population and real estate development.

The section of the Tennessee River Valley that Scottsboro is in is geologically related to the .

There were 6,224 households out of which 28.7% had children under the age of 18 living with them, 52.5% were married couples living together, 12.0% had a female householder with no husband present, and 32.5% were non-families. 29.6% of all households were made up of individuals and 13.1% had someone living alone who was 65 years of age or older. The average household size was 2.32 and the average family size was 2.85.

Scottsboro is home to the [http://www.unclaimedbaggage.com/] . It features articles of unclaimed and undeliverable airline luggage including electronics, clothing, and any other item one might bring with them on a trip. The prices are low enough to attract visitors from other states, as well as from other parts of the world. The Unclaimed Baggage Center has been written or talked about in meany leading publications, including , , , , , , , , and . The following quote is taken from : "It's not just suitcases that are for sale -- it's the contents, too. And they're cheap. Name brand suits start around $50, and racks are full of $20 dresses." Since 2004, however, the prices have begun to rise.

Also, on the old near the public square, the freight depot still stands. Built in 1856, it is considered the oldest standing structure in the original city limits. During the Civil War, Union raiders and Confederate soldiers fought in a skirmish, which ended up with bullet holes in the brick walls and wooden cargo doors. The structure is currently being restored.

First Monday has been a major draw for over one hundred years. [ [http://www.jacksoncountychamber.com/attractions.html Jackson Country Chamber of Commerce: Attractions] ] In the old Southern style, First Monday is a trade day (or ) in which people set up stalls, sell homemade wares, and generally have a good time.

Payne's Soda Shop, located on the Courthouse Square, has been in business since 1869. The small, yet elegant, shop shows off a 1950s-themed design, offering the classic malt, and it even sports extremely rare photographs of Scottsboro's past, such as one photograph showing the only four automobiles during the 1910s, which, surprisingly, was taken almost a century ago just a few feet from the shop in front of the ever-recognizable "Bank Building".

The attraction of has brought in numerous real estate developers. The Goose Pond area of Scottsboro has seen recent development of communities centered around a lake-living lifestyle. Included in these developments are [http://www.ourpeninsula.org The Peninsula] , [http://www.thepromenade-gpi.com The Promenade] and [http://www.theoaks-gpi.com The Oaks] .