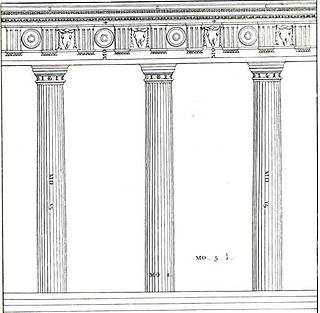 In architecture, intercolumniation is the spacing between columns in a colonnade, as measured at the bottom of their shafts.[1] In classical, Renaissance, and Baroque architecture, intercolumniation was determined by a system devised by the 1st century BC Roman architect Vitruvius.[2] Vitruvius compiled standard intercolumniations for the three classical Greek orders, expressed in terms of the column diameter,[1] twice the Vitruvian module, and he warned that when columns are placed three column-diameters apart or more, stone architraves break.[3]

The standard intercolumniations are:[4]

Pycnostyle
One and a half diameters
Systyle
Two diameters
Eustyle
Two and a quarter diameters, considered by Vitruvius to be the best proportion[5]
Diastyle
Three diameters
Araeostyle
Four or more diameters, requiring a wooden architrave rather than one of stone
Araeosystyle
Alternating araeostyle and systyle