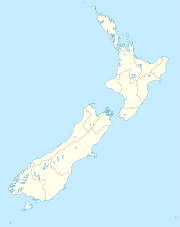 Marton is the hub of the Rangitikei district of the Manawatu-Wanganui region of New Zealand's North Island. It is situated 35 kilometres southeast of Wanganui and 40 kilometres northwest of Palmerston North. The population was 4752 (2001 census).

Marton has always been a service town for the fertile farming region of the Manawatu Plains. Butter, wool, and flour have been among its agricultural products. The arrival of the railway in 1878 led to rapid growth in the area, which soon added industries such as engineering, sawmilling, and textile production to its economy.

The town of Marton is the largest in the Rangitikei district, and began life as a private township in 1866, when shop and housing sections were sold at auction by local land owners.

For three years the small village was known as Tutaenui, named after the stream running through its centre. In 1869 local citizens changed the name to Marton to honour the home village of Captain James Cook in Yorkshire, marking his landing in New Zealand exactly 100 years earlier. It is not known if this change of name was influenced by the mistranslation of 'tutae' (meaning 'dung') and 'nui' (meaning 'large').[1] (Actual translation: 'tu' -stand, 'tae' -arrive, 'nui' big; ie, a 'big gathering').

From the start Marton was an ideal supply centre for district farmers, who first began arriving in the early 1850s. From butter and wool they moved on to growing wheat in 1863, and big crops led to three flourmills being launched in the area in 1864.

After the town itself opened up in 1866, general stores, two hotels and several blacksmiths soon started. Marton became a home base for the horse industry, with saddlers, wheelwrights, livery stables and coachbuilders competing for business, while Clydesdale and Suffolk Punch sires toured the district to build up the population of plough horses needed as new farms sprang into being.

The opening of the railway line joining Wanganui to Palmerston North in 1878, now part of the North Island Main Trunk Railway (towards Palmerston North and Auckland) and the Marton - New Plymouth Line (towards Wanganui), turned Marton into a thriving railway junction, which held that pedestal for the next 100 years.

Timber from Rangitikei forests served the town’s two timbermills, the first from 1889 onwards.

9km from Marton was the large Lake Alice Hospital for psychiatric patients, which opened in 1950 and closed in 1999. It included a maximum security unit, and housed hundreds of patients during its 49 years of operation .