Clearwater Beach is a resort area located on the Gulf of Mexico in Pinellas County on the west central coast of Florida in the United States. It is a part of the city of Clearwater. The geographic latitude is 27.57 N and longitude 82.48 W.

A sunset on Clearwater Beach 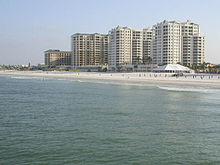 The average local temperature of this subtropical tourist haven is 73 degrees, with fall and spring being the most comfortable seasons.

The area is characterized by a white sand beach stretching for 2.5 miles along the Gulf and sits on one of the county's barrier islands. It has a full marina on the Intracoastal Waterway side and is linked on the south by a short bridge to another island called Sand Key, where on the near end is found a large public beach park, directly on the Gulf.

Sand Key Park, which closes at dark, has picnic and fishing accommodations, a nature trail, beach concession stands, and very spacious parking lots. By contrast, the main part of Clearwater Beach is so densely developed that it can be difficult to navigate by car. (Both areas have metered parking spaces; the hours of enforcement vary.) These two islands as well as the island containing the Island Estates neighborhood belong to the city of Clearwater, whose downtown core a.k.a. "Cleveland Street District" lies a couple of miles to the east over the newly-completed Clearwater Memorial Causeway. 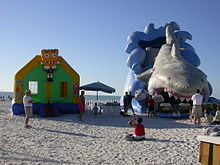 Pier 60, named for Florida State Road 60 which terminates here, is a central spot for beachgoers and has a playground, a snack bar with attached souvenir shop, and a long fishing pier. It's the site of a daily event called Sunsets at Pier 60, which includes street performers and musical acts. On the pier itself is a nightly display of goods sold by local artisans such as jewelry, candles, and other gift items.

The Jolley Trolley bus provides transportation up and down the beach. Mandalay Avenue is the main drag on the north end of the beach with Gulfview Blvd. being so on the south. Both areas feature myriad activities and establishments.

Plenty of restaurants and shops can be found near the southern part of the beach, whose attractiveness was greatly improved in recent years due to a beautification project called Beach Walk. There are drinking fountains, shower nozzles for beachcombers to rinse the sand off, and bicycle racks, as part of the upgrade. Beach "renourishment" efforts such as dune restoration enhance the area's natural beauty along a wide curving sidewalk. A paved bicycle trail lined by mangrove trees is available nearby which parallels the Clearwater Memorial Causeway to the city.

Just up the road is located the Clearwater Marine Aquarium (home of Winter, the bottlenose dolphin featured in the movie Dolphin Tale), as well as a grocery store and other amenities.

In July 2008 the long-anticipated Beach Walk project was completed, featuring a compact pedestrian zone with high-end hotels and condos. [5][6] The beach is also known for its nightlife scene.[7][8][9]