Mikołaj was able to gain much political influence thanks to the romance between his cousin Barbara Radziwiłł and King of Poland and Grand Duke of Lithuania Zygmunt II August.[2] This made him one of the most powerful Royal advisers.[2] Mikolaj became Marshal of Lithuania, Grand Chancellor of Lithuania, as well as Palatine of Vilnius, gained immense wealth and became the most powerful magnate in the Commonwealth of that time.[2]

The growing influence of the Radziwiłł family was further bolstered when, during a diplomatic mission to Charles V and Ferdinand I, he and his cousin Mikołaj the Red received a hereditary title of Prince (Reichsfürst (SRI)).[2]

He formed an alliance with his cousin Mikołaj "the Red" Radziwiłł against other notable Lithuanian families in the rivalry for the dominant status in the Great Duchy of Lithuania.[2] This alliance marked the formation of a dynastic-like cooperation between Radziwiłłs and showed how family interests could affect magnates' relations with the state.[2] Both Radziwiłłs backed the cause of Lithuania's sovereignty and opposed the growing Polish-Lithuanian union.[2]

Mikołaj contributed to the ongoing Polonisation of the Grand Duchy, influencing other Lithuanian nobles to follow him in adopting Polish culture – its fashion, customs and language.[2] 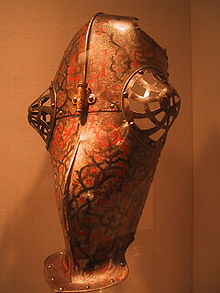 Chanfron, belonged to Mikolaj the Black 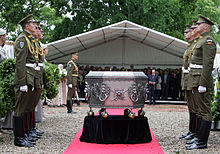 Reburial of Radvila the Black in the Dubingiai, Lithuania

He was known for his religious beliefs, as he was one of the most prominent converts and advocates of the Reformed churches faith in Grand Duchy of Lithuania.[2] He provided financial support for the printing of the first complete Polish translation of the Bible in 1563 in Brest-Litovsk, distributed works written in defense of the Reformed faith, financed a church and college in Vilnius, supported educated Protestants, and in various other ways fostered the Calvinist faith.[2] He is known to have exchanged letters with John Calvin and protecting religious exiles form Italy. Because Protestants supported usage of local languages, he is also believed to have funded Lithuanian churches and schools.[citation needed]

With the exception of his daughter Anna, all his children converted to Roman Catholicism and became ardent supporters of the Counter Reformation. He is remembered by a statue in the Brest Millennium Monument.