Mikalojus Radvila (1470–1521) was a magnate and statesman of the Grand Duchy of Lithuania.

He was a son of Mikalojus Radvilaitis and among the first . He had brothers Jerzy Radziwiłł, Jonas Radvila and Wojciech Radvila and sister Anna Radvila. Mikalojus was a progenitor of Goniądz-Meteliai Radvila family line. He inherited the lands of Musninkai and Kėdainiai. Most of his acquired fortune had been confiscated from Michael Glinski—notably Raigardas, Goniądz and Knyszyn.

He took part in the second Muscovite-Lithuanian War of 1500-1503 and other raids under leadership of Konstanty Ostrogski. Mikalojus was the Podczaszy from 1505 until 1510, Voivode of Vilnius from 1507 and replaced his father as the Grand Chancellor of Lithuania from 1510.

He rivaled Albrecht Goštautas for influence in the government of the Grand Duchy of Lithuania and was the initial editor of the First Statute of Lithuania. 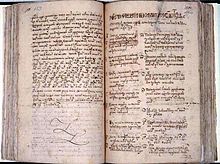 A Lithuanian Metrica of 1511-18, from the chancellery of Lithuanian Grand Chancellor Mikołaj Radziwiłł