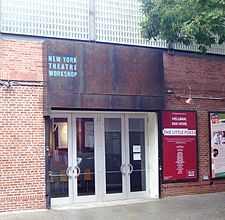 The entrance to NYTW's mainstage 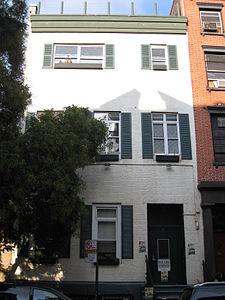 The building next to the mainstage houses a black box theatre, offices and rehearsal spaces

New York Theatre Workshop (NYTW) is an Off-Broadway theatre noted for its productions of new works. Located at 79 East 4th Street between Second Avenue and the Bowery in the East Village neighborhood of Manhattan, New York City, it houses a 198-seat theatre for its mainstage productions, and a 75-seat black box theatre for staged readings and developing work in the building next door, at 83 East 4th Street.

Founded by Stephen Graham, New York Theatre Workshop seeks to "provoke, produce and cultivate the work of artists whose visions inspire and challenge all of us." Its mission is to "explore perspectives on our collective history and respond to the events and institutions that shape our lives." NYTW presents five to seven new productions, over 80 staged readings, and numerous workshop productions to an audience of over 60,000 patrons.[1]

Some of the theatre's progeny – such as Rent and Dirty Blonde – have transferred to commercial productions. The new works of well-established playwrights, such as Caryl Churchill, Doug Wright, and Tony Kushner – a former NYTW associate artistic director – have also been produced at NYTW. In keeping with its mission, NYTW continues to bring new work from theatre legends and emerging artists alike. The theatre maintains connections with many theatrical artists, whom it refers to as "The Usual Suspects".