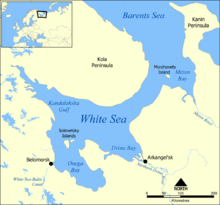 Yagodnik is on an island in the Northern Dvina River, near Archangelsk 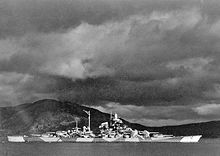 Altafjord is sheltered by mountains

Operation Paravane was the attack carried out by RAF Bomber Command on September 15, 1944 against the German battleship Tirpitz at harbour in the far north of Norway. The Tirpitz was a major threat to the convoys supplying the Soviet Union. Flying via a Soviet airfield, two squadrons attacked. A single bomb hit the ship, disabling her and causing the Germans to tow her south to Tromsø where she would be sunk in Operation Catechism a few weeks later.

The Tirpitz was a sister to the battleship Bismarck of 42,900 tons, armed with eight 38 cm (15 inch) guns. She was designed to attack merchant shipping in the Atlantic, but the loss of the Bismarck and other commerce raiders led to instructions that she should be used for limited sorties only. In early 1942, the Tirpitz was sent to northern Norway, where she would remain for most of World War II. She was based mostly in Kåfjord, a branch of the Altafjord (formerly known as Altenfjord). She acted mainly as a fleet in being, threatening the Arctic convoys and tying up three British battleships that were needed elsewhere.[1]

The operation was planned by Air Vice Marshal Ralph Cochrane of No. 5 Group RAF, and led by "Willie" Tait of No. 617 Squadron RAF. By this time the "Dambusters" squadron were an elite precision bombing force using Avro Lancasters equipped with the Stabilizing Automatic Bomb Sight and Tallboy bombs. Also taking part in the raid were the Lancasters of 9 Squadron, two B-24 Liberator transports carrying ground crews and spares,[2] and a Mosquito for weather reconnaissance.[3]

The Tirpitz was out of range for Lancasters based in Britain, so they had to fly from their bases in Lincolnshire to Lossiemouth, refuel and then fly to the Russian airfield at Yagodnik, 600 miles from Kåfjord.[2]

The defence of the Tirpitz relied on the protection of the narrow fjord, coupled with a highly effective smoke screen system. A pipeline surrounded the fjord, allowing smoke to be generated with the turn of a tap; coupled with nearly 100 smoke pots the entire fjord could be filled with smoke in eight minutes.[4] There were also flak batteries to augment the ship's own anti-aircraft guns.

Thirty-eight Lancasters[3] left Lossiemouth on 11 September 1944.[5] One was forced to return to Britain.[3] After 11 hours in the air, they arrived at Yagodnik to find it covered in 10/10ths cloud at 300 to 500 feet and driving rain,[5] and thirteen Lancasters failed to find the airfield.[6] However the Russians soon located them and all the crews were recovered, although two of 617's aircraft and four of 9 Squadron could not be retrieved from the marshes.[6]

Rain set in and the crews were grounded. On the morning of the 15 September, the weather plane reported that the skies were clear over the Altafjord, and twenty-eight Lancasters set off over the White Sea. Twenty carried 5 ton Tallboy bombs, seven [5] carried 400-500 lb "Johnny Walker" mines designed for use against ships in shallow water, and one was fitted for photo-reconnaissance.[3]

However as the Altafjord came into sight, the smokescreen was turned on. Only Tait in the leading aircraft caught a glimpse of the masts as they disappeared under the smoke, and his bomb-aimer Danny Daniels had to release the bomb by guesswork.[7] Howard, Freddie Watts and Sanders aimed at gun flashes in the smoke, Kell and Knilans bombed on the spot the Tirpitz was last seen; the others bombed by flying beneath the smoke screen and using the intense light flak from the ship as a guide.[5] A number of aircraft did not bomb including two IX squadron aircraft whose Tallboy bombs 'hung up'[5]. Of these P.O. Scott and his crew, veterans of twenty nine previous raids[8] attempted no less than four runs on the target,[5] before heading back to base. P.O. Scott's Tallboy later fell through the closed bomb doors of his aircraft shortly before landing.[5] When the crews had landed, Woods, one of the bomb aimers, said that he had seen Daniels' bomb hit the ship, but no one believed him.[7]

The crews that still had their bombs wanted to have another go, but the weather broke again and they returned home. Levy's aircraft never arrived at Lossiemouth; it is thought he flew into the mountains somewhere in Norway. Eleven men died,[3] including four of Wyness' crew.[7]

The Tirpitz was left with a flooded bow from one Tallboy which struck the ship 50 feet back from her prow, pierced her bow compartments without detonating and exited under the waterline on the starboard side before exploding.[9][10] This underwater detonation close to her hull—as well as those from multiple other 12,000-lb Tallboys detonating nearby—also caused severe concussion damage to her machinery and engines.[3]

Though she remained floating, the damage to her bow and power train left Tirpitz immobile and in need of a slow and laborious backwards tow to a suitably large dry dock for repair. Since the destruction of the Normandie Dock during the St. Nazaire Raid—conducted by the British precisely with this eventuality in mind—there was no longer any Atlantic dry dock in German hands large enough to accommodate her, and an attempt to reach Kiel or Wilhelmshaven by crossing the North Sea at towing speed in the face of the combined forces of the North Sea Fleet and RAF would have been suicidal.

A German report recovered by the Allies after the war stated the Kriegsmarine's conclusion: "It was eventually decided at a conference on 23 September 1944 at which the C-in-C and Naval Staff were present, that it was no longer possible to make Tirpitz ready for sea and action again…"[11] The Germans made plans to tow her south to Tromsø for use as a floating battery in the expected defence of Norway. She was installed on a purpose-built sandbar off Håkøya Island where her keel was further supported with backfill in an effort to keep her guns above water if she was sunk. This could not, however, protect her from capsizing from damage done to one side of the ship, and moving Tirpitz south had (unknown to the Germans) brought her within range of Scotland-based bombers.

The British were unaware they had successfully crippled Tirpitz and continued their attacks, which could now be launched from Lossiemouth, Scotland. Tirpitz suffered no major damage during Operation Obviate due to last-minute cloud cover, but was eventually penetrated and destroyed by multiple Tallboys during a joint attack by 617 and IX Squadrons (Operation Catechism) on 12 November 1944, undergoing a magazine explosion and capsizing over her port side with the loss of most of her crew.